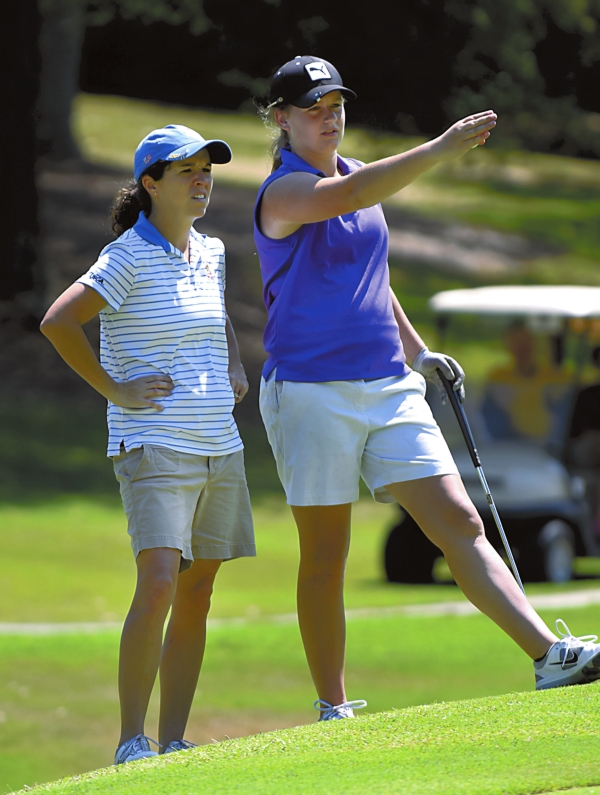 Wayne Hinshaw / for the Salisbury Post Micah Furr points to the 3rd green with partner Allison Adams in the women’s finals of the Crowder-Dorsett Labor Day golf tournament at the Country Club of Salisbury on Monday. Furr and Adams were the winners.

SALISBURY — Being a teacher, wife and mother to two young sons, Allison Adams doesn’t have a lot of time to play golf.

Adams does, however, play well when she does play and you can say she picks good teammates.

On Monday at the Country Club of Salisbury, Adams and partner Micah Furr won the women’s championship in the annual Crowder-Dorsett Labor Day Memorial 4-ball tournament.

While the men’s tournament is in its 63rd year, this was only the sixth event on the women’s side. And Adams has been a champion all six times, the previous five years with Grace Yatawara, now a freshman at East Carolina.

Adams and Furr had a battle on Monday, coming from behind to defeat Kristi Laton and Susan Morris, 1-up, in 19 holes.

Laton and Morris led most of the day, getting off to a great start by winning three of the first five holes. Adams-Furr won No. 7 to cut the deficit to two holes and reduced it one when a great tee shot from Furr on the par-3 ninth led to a par.

“We’re used to being down after the first hole, but it was a little surprising to be down three after five holes,” said Adams. “But we just kept plugging, trying to get it back to even before we ran out of holes.”

Laton and Morris actually won No. 10 to go back up by two holes and it stayed that way until Furr, a senior at Carson High School, eagled the par-5 13th hole. Again, the difference was two on the next hole, the par-3 14th, won by Laton and Morris.

Down two holes with four to play, Furr hit her approach on the par-5 15th to within three feet. That birdie putt cut the deficit to one hole again.

“That was not an easy putt,” Furr said later. “Sure it was short, but it had a lot of break to it.”

Furr continued her solid play with great tee shot on No. 16, while both Laton and Morris hit their tees shots in the second cut of grass, just off the fairway. That led to bogeys for them while Furr managed a par. The match was even.

On the par-3 17th hole, Laton put the pressure on with the best tee shot of the group, but she missed the downhill birdie putt. The teams had pars and halved the hole.

On No. 18, both Adams and Laton had fairly short par putts that could have won the match but both missed and it was on to No. 1 for the first extra hole.

“On 18, I was a little nervous about my long downhill putt going off the green on the front side,” said Laton. “That was my opportunity to close it out and I didn’t.”

Furr made sure that one extra hole was enough. She had a solid drive and was on the green in two shots. Furr nestled her 25-foot birdie putt to within a foot. She made the par while Laton and Morris made bogey.

“It feels awesome to win it again,” said Adams, who played last year while pregnant and experienced back pain throughout the event. “Physically, I was in better shape this year, but it was still hard to win because Kristi and Susan played very good golf.”

Furr was happy to win, too, especially since she was playing with the now six-time champ.

“I felt some pressure playing with Allison because I knew it would be compared with last year and the other years,” confessed Furr. “She and Grace have had the title on lockdown.”

For Laton, it was another disappointment but better than last year when she got her team disqualified for using a weighted swing aid during an idle moment during the competition.

“We came close again and I behaved myself this year,” joked Laton afterwards. “We had fun today … just so much fun. Allison and Micah played awesome golf and again, it was the most fun I’ve had in a long time. We’ll be back next year to try it again.”

Adams was proud of her team’s come-from-behind, never-give-up effort.

“Once we made the turn at just one behind, we thought if we could keep chipping away at it, we could get it to even by about No. 15,” said Adams, wife of professional golfer Frank Adams III. “It was actually No. 16, when we evened it and we made the shots we had to make down the stretch and on the extra hole.”

Furr complimented Laton and Morris: “They were really good, I thought,” said Furr. “They led a good part of the day and really put the pressure on us.”

The team of Sharon Miller and Mechelle Kuld took third place in the women’s division by defeating Tammie Drew and Susan Houston, 4 and 2.