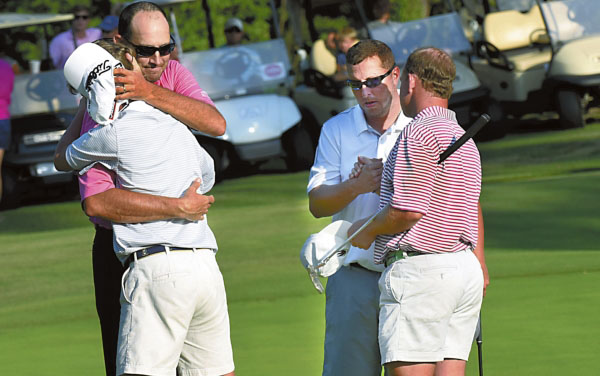 SALISBURY — Shadows were engulfing the 18th green on a beautiful late summer day and a couple of putts were about to decide the 63rd annual Crowder-Dorsett Memorial Labor Day 4-ball tournament at the Country Club of Salisbury.

It was the kind of dramatic ending that has given this tournament its well-earned reputation. is.

Yes, Goode Crowder and A.D. Dorsett would have been proud of the event that now bears their names.

The young team Troy Beaver, 22, and even younger Charlie Barr, 13, edged the dynamic duo of Josh Brincefield and Eric Mulkey, 1-up. Barr becomes the youngest player to be a part of the Labor Day event’s winning team, grabbing the honors from friend Michael Childress who won at age 14 in 2014 with partner Charlie Graeber.

Beaver and Barr led by one hole going to the 18th and both teams had bogeys on the final green. Barr had a long par putt that was close enough for a tap-in bogey and that left things up to Mulkey, who had a 15-foot downhill put for par that could have won the hole and extended the match.

But Mulkey’s putt, while good, slid right a bit near the hole. Suddenly, the match was over, as one of the largest galleries in recent years began to to fill the green with congratulatory hugs and remarks for all four players.

While Barr was giddy with joy, Beaver was a bit emotional with pride. On the flip side, Brincefield was tearful about the near miss and Mulkey exhibited quiet disappointment.

“This means a lot to me,” said Beaver, who just graduated from Elon University after a playing career there. “It’s probably my last tournament before I turn pro and just to be here, with Charlie, is really awesome. We grew up a couple of hundred yards from each other and have been playing a lot of golf together, and to see how he handled the pressure, it was just awesome.”

Barr gave all the credit to Beaver, who had seven birdies during the final match.

“Troy carried me all day today, I was just sort of sitting in the cart watching him,” said the modest Barr. “But really, we had each other’s back whenever we needed the other one to do something. It was just great playing with him all weekend … a great team effort.”

Brincefield and Mulkey were also on the losing end in 2014 to Childress and Graeber, so this loss stung.

“It hurts … really bad,” said a tearful Brincefield. “I’ve been coming out here with my dad since I was about 6 years old and I’ve always wanted to win this tournament. I’m 40 now and I don’t know if I’ll get to the finals again. I kind of felt that I let Eric down at the end, but I tell you, the kids played great and we’re good friends and I’m happy for them — but it hurts.”

Brincefield wasn’t a factor on No. 18 as hit his tee shot into the woods and then his approach from out of the trees flew over the cart path behind the green and “into the grill room,” he quipped later. “I’m just glad it didn’t hit anybody. Just too much club.”

That left things up to Mulkey to make up the one-hole deficit and he had the best drive of the foursome, but left his second shot short. A solid, but long chip shot left him with the downhill par putt.

“I wished that I could have finished a little stronger,” said Mulkey. “I had two opportunities to win two holes and didn’t. I could have halved the hole on No. 17 to keep us even and I could have easily won this hole (18th). I had the best tee shot of the bunch but I had a sidehill lie and the ball was way below my feet. I just didn’t go down and get it and hit a bad shot, leaving it short.”

The aforementioned 17th, a 205-yard par-3, was key to the win for Beaver and Barr. They had bogeyed the 16th, putting the match all square.

Mulkey teed off first and landed his shot to within six feet, although it was little downhill. Brincefield and Barr were in front and behind the green, respectively, but Beaver, hitting last, came in with a 5-iron to within three feet.

After Mulkey left his birdie putt a few inches short, Beaver calmly made his short putt for the lead, going to No. 18.

“I just knew that I needed to hit a good shot because we had lost No. 16 to get back to all square,” said Beaver of his tee shot on No. 17. “It was similar yardage as yesterday (Sunday) and I really felt comfortable over the ball. I’m glad that I was able to pull it off.”

But the door was definitely open on the last hole, as Beaver and Barr both ended up with “fried eggs,” balls half-buried in the green-side bunker.

“I told Charlie to just give himself a putt for par when he came out of the sand, and if you make bogey, make them make their putt,” said Beaver. “That’s what happened and it worked out for us, but Josh and Eric are great guys and it was a great match all day.”

Mulkey and Brincefield were actually two-up after eight holes, but they lost No. 9 and Beaver birdied No. 11 to even the match. Beaver also birdied No. 12 but then Mulkey had a birdie on the 13th hole, so it was even again.

Beaver’s birdie on the par-3 14th gave him and Barr the lead again and after No. 15 was halved, Mulkey’s par was good enough to even the battle one last time.

Then came the fateful 17th hole.

“You’ve got to give it up to Troy on 17,” said Brincefield. “Eric hits it in there first to within six feet and then Troy knocks in there to three feet? What a clutch shot right there. Troy played great all day and Charlie did what he had to do … good for them.

“It’s a great tournament and so much fun,” continued Brincefield. “It’s such an important thing around here that it means a lot to have your name on that champions’ list.”

The tournament ended a lot better for Barr than the way it started. The youngster stepped on a water snake on his first hole during qualifying last week but luckily, wasn’t bitten.

“I probably could have beaten (Olympic sprinter) Usain Bolt out of the gate, I jumped up so fast and ran straight to the cart,” remembers Barr. “I was in shock until the fourth hole that day. So my Labor Day tournament didn’t start too great but I guess it ended up pretty well.”

Barr said that since Beaver is likely turning pro and Childress’ partner this year, Nick Lyerly, will be in college, he hopes to defend the title next year with his neighbor — Childress. “Michael was the youngest to win this and now I am, so next year, we’ll just play together.”

In Monday morning’s semifinals, Brincefield and Mulkey defeated defending champions Phil Miller and Andrew Morgan, 2 & 1. Miller and Morgan were attempting to be the first back-to-back Labor Days champs since John and Tripp Isenhour in 1988-89.

In the other semifinal, Beaver and Barr defeated Patrick Gregg and Kevin Lentz, 6 and 5.

In the men’s senior (55+) championship, the team of Chip Comadoll and Jerry Wright defeated Greg Chappell and Doug Glenn, 4 and 3.