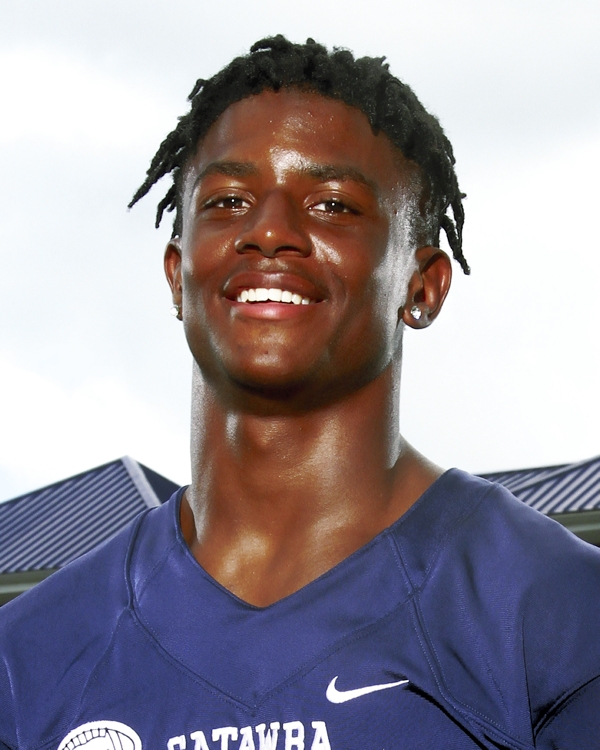 SALISBURY — As a high school senior, Cris Page made nine interceptions to lead Georgia’s 5A classification and demonstrated speed as well as a hard nose as he aggressively returned those picks for 129 yards.
Page also broke up 17 passes and made 52 tackles.
Still, Page managed to fly under the recruiting radar for many colleges, probably because his high school team in metro Atlanta — the Heritage High Patriots of Conyers — went 1-9.
Catawba defensive backs coach Ahmaad Smith successfully recruited Page, who reported early to Catawba, attended summer school classes and got a head start on learning Catawba’s defensive system.
Catawba handed Page the conspicuous and theoretically unlucky No. 13, the same number Page wore in high school.
Page was just one of four freshman corners the Indians recruited, with the hope that one of them would step forward as the guy to replace departed Mark McDaniel, a cornerstone of Catawba’s exceptional 2015 defense.
Page won the scrap for a starting job. His reward was the opening-day assignment against a West Georgia team ranked No. 2 nationally in Division II and with a quarterback (Will Gardner) who had started games for Louisville.
“I knew as soon as I released the depth chart that we were making the kid (Page) a target,” Catawba head coach Curtis Walker said with a sigh. “We’ve got an all-region guy in Case Woodard on one side and we’ve got a true freshman corner on the other side, so if you’re West Georgia, who are you going to attack?”
Page was less nervous about his debut than his coaches. He managed to sleep some on Friday night after the Indians traveled to Georgia Friday morning.
“I was more excited than nervous,” Page said. “I was just excited to play. And I knew I was going to have most of my family there to see me and support me.”
Page went to high school about 70 miles from West Georgia, so the game was in driving distance for a host of family and friends.
Veteran right guard T.J. Olsen, Catawba’s Offensive Player of the Week, didn’t allow a sack, and linebacker Trey Evans, a Georgia native who was Catawba’s Defensive Player of the Week, was all over the place.
But Page stood as tall as anyone in Catawba’s 23-3 loss. He had an interception and a tackle for loss and several pass breakups.
“He made some early mistakes, but overall, he responded very well as a young corner to the challenge of playing a highly ranked team,” Walker said. “Cris has a high skill level and a bright future. His mindset is to tell everyone to bring it on, and he held his ground.”
Page’s interception came early in the fourth quarter when Catawba was trailing 13-3. It was a play that gave the Indians a chance to make a comeback.
“It was just a ball that the quarterback threw high,” Page said. “I saw it coming, caught it, and after that, everything was moving in slow motion.”
Page broke up a couple of passes in the red zone when West Georgia challenged him and those plays helped force field goal attempts. He also charged up and tackled receiver Qa Walker for a yard loss on a first-and-10 play in the fourth quarter. That tackle helped Catawba get a stop.
“As the game went on, I was getting more and more comfortable out there,” Page said.
Diligent work in practice has helped Page adapt to the speed of college football as quickly as he has.
“Cris always chooses the tougher road in practice, working against experienced receivers like Keyon West, rather than the rookies,” Coach Walker said.
West agreed.
“I’ve been doing my best to prepare him for Saturdays,” West said. “We want Cris to see the things that he needs to work on.”
One game into his career, the 6-foot, 170-pound Page has earned the trust of coaches and teammates. McDaniel will not be forgotten, but Catawba believes it has found the guy who can follow him.
“We threw Cris into the fire on Saturday,” veteran defensive lineman C.J. Barksdale said. “But he plays hard and he works hard. He’s going to be all right.”
•••
NOTES: Page’s high school teammate Anthony Stanley also made his debut for Catawba on Saturday and made three receptions for 27 yards. … Quientel Goodwin, a true freshman from Richmond County, was Catawba’s Special Teams Player of the Week. He averaged 23 yards on kickoff returns and did a good job of catching punts. … Catawba hosts Winston-Salem at 6 p.m. on Saturday. See preview information in Saturday’s Post.