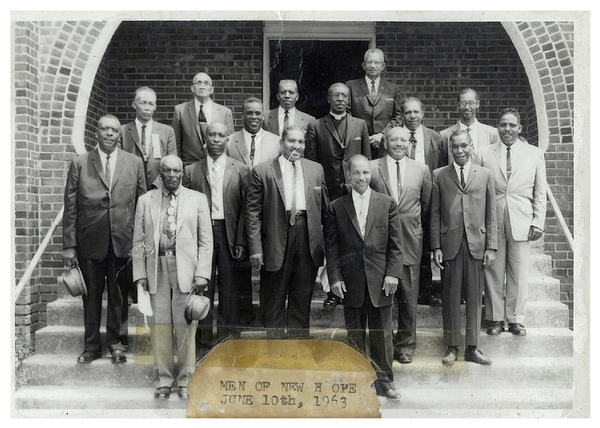 This photograph, labeled “Men of New Hope, June 10, 1963,” was discovered recently during a cleaning of offices at New Hope AME Zion Church at 1470 N. Long St., East Spencer. It serves as a good reminder that the church will celebrate its 130th anniversary this Friday through Sunday. Friday there will be a 6 p.m. concert at the church; Saturday, a Family Fun Day at Royal Giants Park; and Sunday an 11 a.m. homecoming service. The church dates back to 1886. It was first called Peter Holt Chapel and the first church building was erected on U.S. 29 in Spencer. By 1890, Peter Holt Chapel was torn down and replaced with a church renamed New Hope AME Zion. With the coming of Spencer Shops and population shifts, a portion of the New Hope congregation organized a new church, which became today’s Southern City Tabernacle AME Zion. Over time, New Hope AME Zion was located within an all-white community in the northern area of Spencer. In 1925, the New Hope church building burned down, and for a year, services were held in the North Spencer Grammar School. The present church was built in 1927 in East Spencer on land owned by Edward Clement, a member of the board of trustees. The men shown in the 1963 photo include, left to right, first row: Ernest Avery and Lester Roberson; second row: Willie Moore, Rastus Clinding, Albert Stout, R.D. Kirk and Albert Stout Jr.; third row: Everett Parker, Aaron Bush, the Rev. J.N. Torrence, James Stout and George D. Stout; fourth row: Fred Parker, Wylmer Stout and Memphis Trueblood; last row: Harvey Roberson. Simone Martin, a member of the church, reports that sadly all of the men in this picture are now deceased.