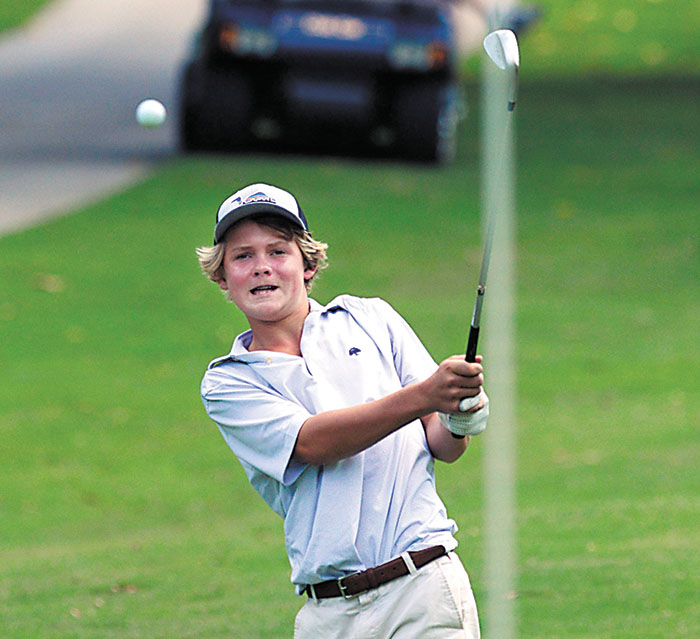 13-year-old Charlie Barr chips onto the 3rd green in the Crowder-Dorsett Memorial Labor Day 4-Ball golf tournament at the Country Club of Salisbury. photo by Wayne Hinshaw, for the Salisbury Post

SALISBURY — There is no rest for the ambitious — and 13-year old Charlie Barr and 22-year old Troy Beaver are nothing if not ambitious.

“Everybody was playing great golf,” Beaver said at the Country Club of Salisbury, where Barr birdied a 3-foot putt on the first extra hole and ousted the tournament’s No. 2 seed. “We just stayed focused the whole match and finally got the momentum on our side.”

Barr and Beaver won only two holes — the 11th on Barr’s 7-foot slider and the decisive 19th. But Childress and Lyerly, the headline-grabbing 17-year olds enjoying a kids-at Disneyland summer, won only the first hole. Both groups birdied 17, bringing an entourage of spectators to 18, where Beaver nearly won the match. His 20-footer down a gradual slope caught the back of the cup and pinballed away, extending the match.

“It lipped out really hard,” Beaver said. “I thought it was in, thought it was a great putt. I looked at Charlie right after that and said, ‘We’ve still got work to do.'”

Their work was finished moments later when Barr sent the crowd home with yet another memorable shot. “It was a great opportunity just to play against them, let alone make the championship flight,” he said with an apple-cheeked grin. “It was a hard-fought match with a lot of really, really good golf.”

Barr and Beaver will face Patrick Gregg and Kevin Lentz in this morning’s semifinals. The No. 3 seed rallied from three holes down after five to edge Lee Frick and Blake Wray, 2 and 1.

“We faced some adversity,” Lentz said. “It was a hard day. We really muscled through it and kept our emotions in check. There were no high-highs and no low-lows.”

Frick and Wray used birdies to win the first and third holes, and a Gregg-Lentz bogey gave them No. 5. “We had to come back late,” noted Gregg, who sank a 1-footer for par on 6 to stop the bleeding. “We birdied 11 and 12 to square it and won 13 to go one up, then birdied 15 to go two up. That’s a five-hole swing over 10 holes — and it was huge. We brother-in-lawed it really good.”

The other semifinal pits defending champions Phil Miller and Andrew Morgan against fifth-seeded Josh Brincefield and Eric Mulkey. Miller and Morgan were off the course in less than four hours after topping Chris Nesbitt and Chris Rae, 4 and 3. They were one hole up after nine, but played a strong second half to win going away, recording five birdies and an eagle.

“The back nine was a birdie-fest,” said Morgan. “We’d been putting decently all day, but hadn’t seen anything go in. I feel like I burned some edges on the front nine, but the thing was every time they got a birdie or made a good shot, we got one right back.”

Miller made putts for birdies on the 10th and 11th holes to give the top seeds a three-hole lead. But they halved No. 12 and lost 13, setting up the match’s key shot on No. 14 — where Morgan drained a 35-foot putt for birdie. “That was the pivotal hole,” Miller said. “Whether you win or lose 14, it always seems to effect the outcome on this course.”

The M & M boys hope to be the tournament’s first back-to-back champion since Tripp and John Isenhour repeated in 1989. “We feel like we’re coming in under the radar,” Miller said. “The young guys are the ones you hear about. But hey, we’re at the half-way point and just taking it one shot at a time.”

So are Brincefield and Mulkey, the No. 5-seeds who sank birdies on four the last six holes in a 2 and 1 decision over Jon Allen and Derek Paschal.

“They came out strong and put us two down early,” said Brincefield. “Finally we birdied seven to get even.  For two days we hadn’t made anything. At that point we just decided to quit messing around.”

Ironically, it was Mulkey’s misguided 10-foot putt that steered wide on No. 8 that flipped the on/off switch.

“It’s surprising to say,” Mulkey tried to reason. “But missing that putt fired me up. After that we finished strong, but I learned something on eight. I was hitting my putts too hard. You have to let them die and just roll in.”

NOTES: Today’s semifinals tee off at 8 a.m. and the championship round begins at 1 p.m. The women’s championship, pitting Allison Adams and Micah Furr against Kristi Laton and Susan Morris, is scheduled for 12:10 p.m.