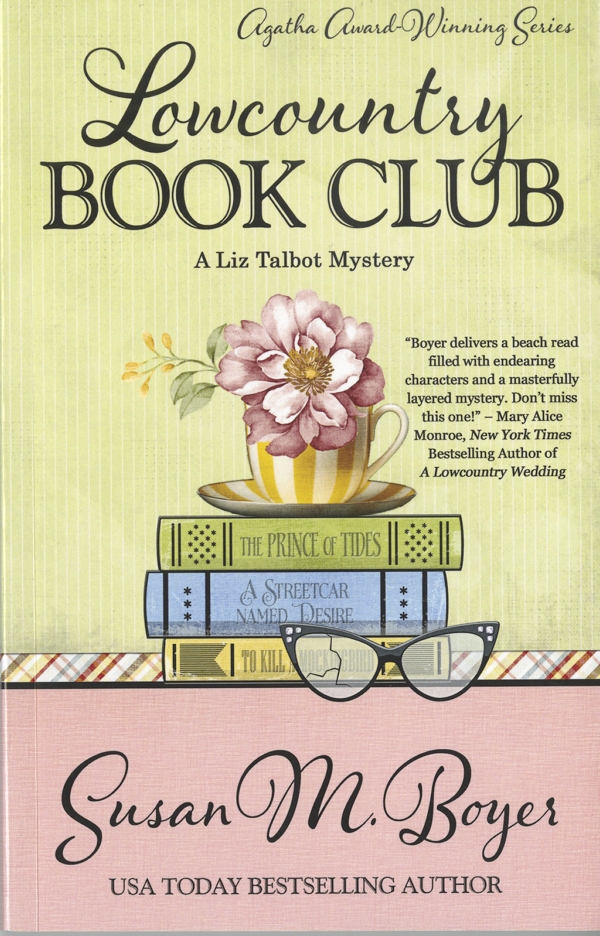 Susan Boyer’s private investigator, Liz Talbot, is at it again, working on a case that has too many suspects and no clear motives.

In “Lowcountry Book Club,” she and partner Nate are married and splitting time between Stella Maris, the fictional island near Charleston, S.C., and Greenville.

This mystery is in Charleston, where a well-loved, well-heeled philanthropist has gone splat in her courtyard after a fall or push from a second-story balcony.

Naturally, the police assume her husband did it. But Clint Gerhardt adored Shelby Poinsett. Her trust fund had been altered so that the couple shared it equally — he’s got plenty of money. Her parents love him.

He’s more than a little protective and jealous, but he came from a broken family and he’s always afraid someone else is going to leave him.

Liz relies on her generally sharp instinct that Clint is innocent. She and Nate have just two weeks to prove it before Clint goes to trial.

Colleen is back, but she’s busy with other things, not popping in as often as usual. Colleen, if you haven’t been reading the Liz Talbot mysteries, is a ghost, Liz’s teen-age friend who killed herself a long time ago.

Problem is, Liz can see her and hear her and that has lead to numerous awkward situations. Now Liz has learned to direct her thoughts toward Colleen, rather than having to talk. Still, she does materialize in some surprising places.

Colleen cannot solve a case. She can’t point Liz in the right direction. But she can protect her from danger and eavesdrop, until she’s called away for another duty. It’s tough being the ghost assigned to protect a whole island in the Atlantic.

Shelby, according to her friends, family and acquaintances, is an angel. She worked hard for those less fortunate, she was compassionate and often moved to go beyond the call of duty.

Maybe that’s what got her killed.

Clint is miserable. He lost the love of his life and now he’s accused of her death. His character is a little shadowy, as if he were not fully developed — but he doesn’t really need to be, since he’s not the prime suspect.

To complicate matters, one of Liz’s childhood friends, Sonny, is somehow involved, and her brother, Blake, the island’s police chief, is not very forthcoming.

From hints some of the characters drop, the suspects are pretty suspicious of each other. It would be such a relief if Clint were the killer, so they could get back to their well-manicured, well-managed lives.

Boyer gets in plenty of details, lots of spot-on sights and sounds of Charleston, and sets the atmosphere at snooty. Yep, there are plenty of real snooty rich folks in those historic homes, with traditions and ranks that are not to be crossed. Dear old Charleston looks a little tarnished.

Getting in a book club is harder than trying to meet a member of royalty. A person in a lower social strata would never be invited. In Shelby’s book club, someone has to die for the membership to change.

Liz wonders if someone in the club was desperate enough to make that happen.

Delta, a book club member, is unstable and recently divorced — and she has snapshots of Clint in her nightstand. What does that mean?

Shelby’s been seen at a hotel repeatedly with a certain man. Is that the smoking gun?

Naturally, they are smart enough, and work hard enough that things begin to come clear, particularly after not one, but two drive-by shootings that were obviously meant more to scare than kill.

With this series, Boyer always has a sense of humor. So the super couple of Nate and Liz can’t be in deathly danger — these books are fun outings with familiar settings and peeks into the dark. This one is a summer 2016 Okra Pick, too.