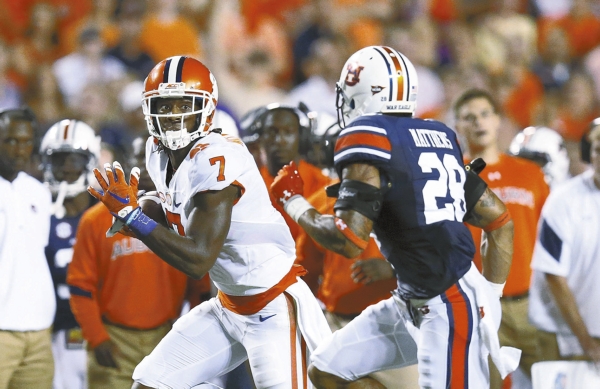 AUBURN, Ala. (AP) — Deshaun Watson passed for 248 yards, including 174 to Mike Williams in his return from an injury, and No. 2 Clemson escaped with a 19-13 victory over Auburn on Saturday night.

Clemson struggled to put the away the opener even though Auburn produced little offense for much of the game while swapping three quarterbacks in and out. Finally, Watson hit former walk-on receiver Hunter Renfrow in the back of the end zone on third and goal from the 16 with 9:59 left in the fourth quarter.

Ben Boulware’s subsequent goal line interception only provided a temporary reprieve for a team that made the national championship game last season and is among the favorites to win it this time. Auburn finally got a touchdown with 3:22 left on a 9-yard direct snap run by Kerryon Johnson and Clemson’s failed fourth-down try deep in Auburn territory set up another shot with 40 seconds and 85 yards to go.

Sean White drove the offense to the Clemson 40, but two desperation heaves into the end zone fell incomplete, with the second getting batted around.

Watson, the 2015 Heisman Trophy finalist, had looked the part for much of a final drive. Coach Dabo Swinney went for it on fourth and 4 instead of attempting a 34-yard field goal. Tray Matthews stopped Wayne Gallman short, and Auburn’s hopes still lived.

Gallman gained 123 yards on 30 carries, and Williams had nine catches after missing most of last season with a neck injury.

If Watson didn’t exactly pick right up from his 478-yard bonanza in the national championship game against Alabama, he was still good enough. And Williams provides Clemson’s offense with yet another threat. Auburn’s offensive problems continued from last season, with three quarterbacks attempting passes on the first six plays.

Possibly barring a dominating win by No. 4 Florida State over No. 11 Mississippi Monday night, Clemson seems likely to stay put right behind Alabama. No. 3 Oklahoma was upset by 15th-ranked Houston earlier in the day. The close score does make it a question mark, though.