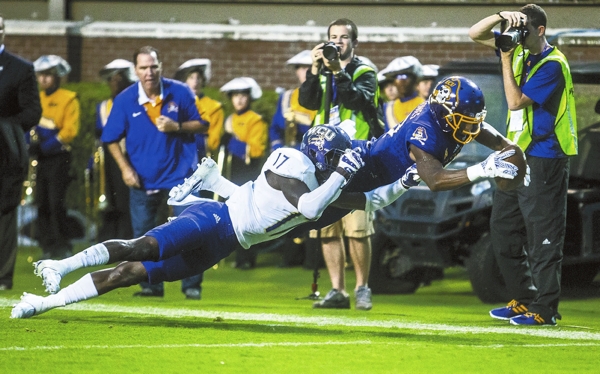 GREENVILLE, N.C. (AP) — Philip Nelson passed for five touchdowns and ran for another in his East Carolina debut and the Pirates gave new head coach Scottie Montgomery a 52-7 victory over Western Carolina on Saturday.

Western Carolina took the opening kickoff and drove to the East Carolina 10 before Travon Simmons came up with an interception. Nine plays and 89 yards later, Nelson had run in from the 7 and the Pirates led from there.

Nelson threw touchdown passes to Quay Johnson, Anthony Scott and Zay Jones en route to a 31-7 halftime lead and added one each to Scott and Jimmy Williams in the third quarter.

Nelson, who made 16 starts in two seasons at Minnesota, set career highs with his five touchdowns and 398 yards passing.

Montgomery was on the Duke staff the three previous seasons.