Ken Hardin: A rescue team is not on the way 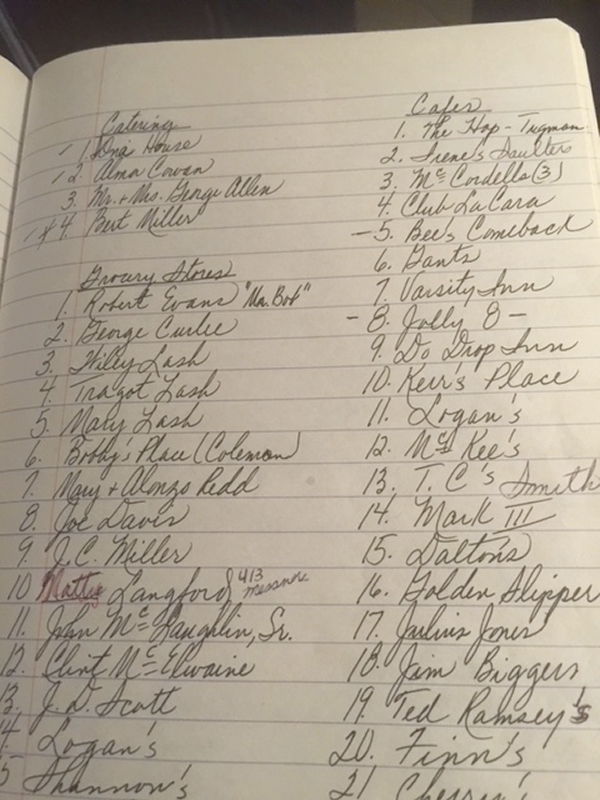 Ledger lists some of the many black-own businesses that operated in Salisbury in the early 20th century.

I’m way past weary of all the shootings, but being weary is not enough. We have to be truly tired, tired like civil rights icon Fannie Lou Hamer, who said she was sick and tired of being sick and tired. We have to be emotionally drained like “Green Mile” movie character John Coffey, who said, “I’m tired, Boss. …Mostly I’m tired of people being ugly to each other. I’m tired of all the pain I feel and hear in the world every day.”

Sadly, we’re so situational and temporarily angry; we easily compartmentalize our frustration and ignore it until the next episode.

Although it felt a bit manufactured, I’m glad the new chief was outraged after one day of shootings. But, imagine the outrage people feel that have endured it for longer with no relief.

Nearly a month ago, I was on the West End after 11 p.m. interacting with the night owls, as I normally do. A sudden burst of gunfire broke out close to me, but I didn’t feel outrage; I felt fear. I sympathize with the people who have to endure this sense regularly.

That level of genuine concern seems to be missing, and it’s easy to deny the reality of a societal ill when it doesn’t impact you personally. You create a divide when you start a sentence off with “Them,” “They” or “Those people over there.” Crime and violence don’t happen in a vacuum, so when you wag a judgmental finger and assign a color to the problem, you create irreparable harm to relationships.

I don’t think the city or many of the so-called community leaders take this continual violence seriously enough and aren’t putting in the needed work to diminish it. Instead, many of the talking heads are trying to be on the mayor’s speed dial, hoping for an invite to the Country Club, or seeking relevance via fake personas while doing nothing to solve the gun violence.

Several years ago, I counted 13 churches on the West End. Just as we can’t arrest our way to progress, we can’t pray and hallelujah it away, either. I recall being told by a pastor I needed to stop worrying so much about what was going on in this life and focus more on getting to heaven. If you’re under the constant fear of being a victim of gun violence, you’re already living in a state of hell.

I talked at length last week with a well-respected retired educator. I asked her, “When did our community lose its cultural pride and regress to the current state we find ourselves?” She serves as an unofficial historian and keeps a handwritten ledger she’s maintained for years on black business success from the early 1900s through today. I was amazed at the number of black-owned businesses and professionals that existed in Salisbury before integration. It was wonderful to hear her recount the number of construction companies, three newspapers, grocery stores, a bicycle shop, pest control businesses, a loan company, service stations, civic clubs and the number of electricians, brick/stone/tile masons, and blacksmiths.

It was more impressive hearing of the notable famous figures who regularly visited. Familiar names such as Langston Hughes, Rosa Parks, Duke Ellington, Count Basie, Jesse Owens, Louis Armstrong, Madame C.J. Walker, Gwendolyn Brooks and Alvin Ailey graced our community and stayed in the homes of black residents, since they could not get lodging at local hotels.

Where has that prestige and significance gone?

If you tell people often enough their lives hold no value, they will believe it, begin acting accordingly and oblige others to treat them as such. It’s up to the black community to regain that progressive mindset  and restore cultural dignity. A rescue team is not on the way.

City leaders appear to be more concerned about protecting its All-American image and filling up the empty buildings downtown than addressing the gun violence. We have a lot of people in leadership positions that are not from Salisbury, and some who work but don’t live here. If you don’t have an emotional investment to the city and its communities, you’re the wrong person to be interacting with the distressed communities. Trust needs familiarity.

There is an absence of reality or a strategic plan to address this issue. If there is one, I didn’t get copied on the memo. The plan has to include both enforcement and prevention efforts. We can’t keep putting WD-40 on a squeaky door and ignoring that it’s actually broken. It may be fine to temporarily shove a piece of wood under a wobbly table, but eventually you’re going to have to fix the table.

Moving forward without a definitive plan to address this gun violence is nothing more than wishing and hoping. I’m tired of doing both.

Kenneth L. Hardin is a member of Salisbury City Council.