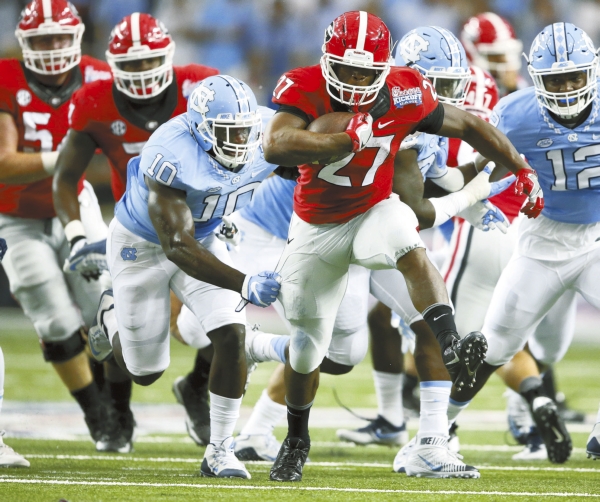 Georgia running back Nick Chubb (27) tries to breaks away from North Carolina linebacker Andre Smith (10) in the first of an NCAA college football game against North Carolina in Atlanta, Saturday, Sept. 3, 2016. Chubb missed most of last season with a knee injury. (AP Photo/John Bazemore)

ATLANTA (AP) — Nick Chubb rushed for 222 yards in his return from a gruesome knee injury, including a 55-yard touchdown run late in the fourth quarter that clinched No. 18 Georgia’s 33-24 victory over No. 22 North Carolina in Kirby Smart’s debut as the Bulldogs’ coach Saturday night.

Chubb scored a pair of touchdowns for Georgia (1-0), sending the largely red-clad crowd at the Chick-fil-A Kickoff Game into delirium when he broke loose down the right sideline with 3:34 remaining and the Bulldogs clinging to a two-point lead over the Tar Heels (0-1).

Leaving no doubt he was fully recovered from a horrific knee injury that looked like it might be career-threatening, Chubb carried a staggering 32 times and was every bit as dominating as the Heisman-touted back he was before.

“It felt amazing,” Chubb said. “It took my mind off everything. I was just out there playing with my boys.”

Georgia also got some promising play from freshman quarterback Jacob Eason, who didn’t start but was on the field as the Bulldogs rallied from a 24-14 deficit in the second half.

North Carolina ripped off 17 straight points, including a pair of touchdowns by T.J. Logan that included a 95-yard kickoff return to start the second half.

But a pair of pass interference penalties on freshman cornerback Patrice Rene set up a touchdown that got Georgia back in the game, and two more penalties — one an unsportsmanlike conduct penalty on coach Larry Fedora — backed the Tar Heels up deep in their own territory, leading to a safety when Elijah Hood caught a short pass in the end zone and was quickly knocked down.

“We got the penalty on a lineman downfield. I was questioning the call. The guy didn’t like what I said, so he threw a flag on me,” Fedora said. “That’s nobody’s fault but mine. It’s the first time that’s ever happened in my life. It’s pretty disappointing.”

Fifth-year senior Greyson Lambert started at quarterback for Georgia, but Eason — a touted freshman Georgia fans were clamoring to see — hooked up with Isaiah McKenzie on a 51-yard pass that set up William Ham’s go-ahead, 29-yard field goal with 5:27 remaining.

Smart, the longtime Alabama defensive coordinator, was coaching a team of his own for the first time. He was hired after the Bulldogs dumped Mark Richt, who wound up at Miami after 15 years as Georgia’s coach.

“It felt really weird,” Smart said, chuckling. “A comedy of errors. I had to flip over on my headphones, trying to figure out who I was talking to. That was different for me. I was trying to find the special teams. I didn’t feel like I was coaching my players, which I always felt was my best asset. It was a unique experience for me that I will build on and learn from.”

North Carolina: The Tar Heels were eager for a signature win over a major-conference foe, but too many silly mistakes — and that one disputed flag — worked against them. Despite 11 wins a year ago, they have yet to show they are ready to challenge Clemson and Florida State in the Atlantic Coast Conference.

Georgia: The play of Chubb and Eason gives the Bulldogs plenty of reason to feel hopeful about contending in the Southeastern Conference East, especially after a shaky showing by favored Tennessee in its season opener.  Smart rotated quarterbacks in Week 1, but there will likely come a time in the not-too-distant future when the job belongs solely to Eason.

North Carolina: The Tar Heels hit the road again next Saturday to face Big Ten school Illinois. It will be their first visit to Champaign since 1971. North Carolina leads the series 3-0, including last year’s 48-14 rout in Chapel Hill.

Georgia: The Bulldogs take big step down in competition when they host FCS school Nicholls State between the hedges. After a tough opener, it should provide a chance for give some playing time to those further down the depth chart.