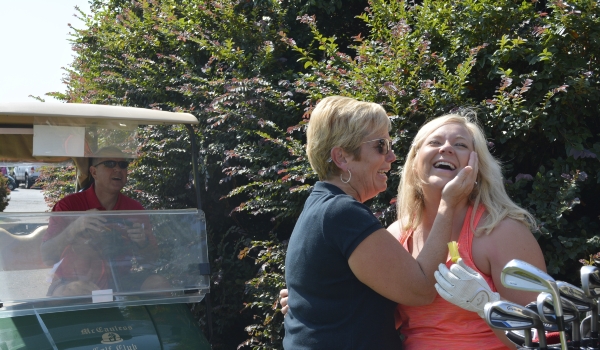 Amy Stokes embraces her daughter after Grace completes her first hole at McCanless Golf Course. ‘She was back,’ her mom said afterward. Susan Shinn/For the Salisbury Post

On this late August day, summer is still holding on tight. The heat doesn’t seem to bother Grace Stokes. She’s strapped her clubs onto her golf cart and is ready to tackle hole no. 1 at McCanless, her home course when she attended East Rowan High School.

The all-county and all-conference golfer hasn’t hit the links in over a year. Last summer, Grace, 19, was in a horrific car accident in which she nearly lost her right leg. For months, she didn’t know if she’d even walk again, much less swing a golf club.

So today is a big day for Grace, her parents, Glenn and Amy, and her boyfriend, Nathan Fulbright.

The week before, Grace moved back to Salem, where she’s beginning her sophomore year. Remarkably, she was able to keep up with her studies. Grace plans a career in nursing, a career choice solidified by spending months in the burn unit at Wake Forest Baptist Medical Center.

Before taking off in two carts, Grace, Amy, Glenn and Nathan greet Scott Perry, the head golf pro at McCanless, who was Grace’s first golf teacher. He won’t take their money, and waves them over to the first tee.

Inside the club house, Grace finds her old locker, and Amy helps her put on her shoes. She’s not great at bending down yet.

After her mom adjusts her shoes, Grace ticks off the list of injuries she received on June 28, 2015, when the car in which she was a passenger was T-boned on the way to Holden Beach. A double compound fracture of her right leg, which was severed below the knee at the calf. A pelvis broken in four places. A broken pubic bone. One broken rib.

The worst injury was her leg. Grace fought for months to keep it. To date, she’s had 40 surgeries. The last phase of reconstruction is set for next spring, in which doctors will place tissue expanders in her upper right thigh and hip. And that will be about all they can do.

Unbelievably, the worst part of the ordeal was not the terribly broken leg. After impact, the car in which Grace rode was thrown into a drainage ditch.

Because of that, Grace developed mucormicrosis, a flesh-eating bacteria that took 2,000 square centimeters of her upper right leg and thigh — some 310 square inches of skin. Before all the reconstruction, Grace’s right leg looked like that of an extreme body builder — only muscle remained. Her two legs are more similar in size, as she had liposuction on her left leg in August to even them out.

For a teenage girl who lives in a culture so immersed in beauty and perfection, the injury was devastating.

“It’s definitely something I have to live with,” she says, “but it could be worse. But I’m young, and they can work on it. It was very, very scary at first. But I’ve learned to live with it and deal with it.

Grace spent all of last summer in the hospital — most of that time in Baptist’s burn unit, as doctors rebuilt the areas where her leg had been eaten away. Amy never left her side. Glenn and Nathan visited often.

After she and Glenn saw the vehicle, Amy says it’s a miracle Grace even survived the accident. Because the vehicle wasn’t theirs, they have no pictures from the scene. Grace doesn’t want to see them.

Amazingly, the first person who approached Grace told her he was an orthopedic surgeon. Because Grace’s father is a state trooper, Grace did as her father always told her, and gave him her name and her parents’ phone numbers. The surgeon asked if he could look at her leg, and she said yes. He quickly reset the leg, and applied a tourniquet.

Grace doesn’t know who he is, but she’d like to meet him one day, just to say thanks, for saving her leg, and saving her life.

Late last summer, Grace was finally able to go out in public.

“I was really scared,” she says, “because everybody knew about my car accident.”

But she’s learned to handle the stares that sometimes come her way. Her roommate at Salem, Ashley Jarrett of Burlington, often tells her how beautiful she is.

Now, Grace says, “In a way, I’ve appreciated it. Everything happens for a reason. My friends at school are so dear to my heart. People do stare sometimes, but it doesn’t bother me at all. There were many nights I cried to my mom, but now I have learned to accept it. I don’t like to talk about things I have no control over.”

What she does like to talk about is her plans to enter the nursing field. She wants to apply to nursing school at Forsyth Technical College in January, and enter the program next August.

“This has pushed me to be a nurse even more,” Grace says. “I want to work where I lived for three months. I know everybody there. I will know where my patients are coming from. I’m going to be empathetic.

“The most important thing I’ve had every day is my faith. You’ve gotta have faith.”

That said, Grace climbs on her cart and takes off.

“I’ve been trying not to cry all day,” Amy admits. “I knew I’d cry when she got out her clubs, but I started crying when she put on her golf socks!”

“We’re just gonna try to play, just go on a hole and see how it goes,” Grace says.

She’s nervous and excited all at the same time.

“The first time, it’s gonna be bad,” Grace says of teeing off.

She gets to the first tee, and takes a couple of warm-up swings. She tees off. She hits the ball, but not as far as she’d like.

“Remember, I have half a leg here!” Grace says, undaunted.

She tees it up again.

This time, she makes solid contact with the ball.

The ball sails, straight and true, soaring down the middle of the fairway.

Nathan gives Grace a congratulatory kiss as she leaves the tee. Amy is crying in earnest by the time Grace gets back to the cart, and then crying and laughing at the same time as she gives Grace a long hug.

Disentangled from her mom, Grace then hits her fairway shot.

She approaches the green and begins putting. She misses a couple.

“You gotta work on your short game,” her dad says, and she glares at him.

Finally, she taps the ball into the cup.

Grace is going to be OK.

How to keep predators away from your chickens