In the Army: Kids enjoy military theme at Cousins’ Camp 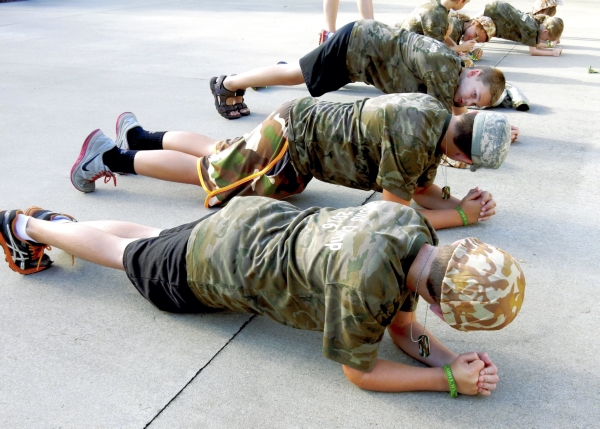 Three-year-old Hailey mostly potty-trained herself so she could be eligible for Cousins’ Camp. That’s a requirement. Once accomplished, the kids are in for an experience they’ll never forget and will eagerly anticipate each year.

Camp is held in August at the home of Linda and Lanny Merrell on Crescent Road in Rockwell. Ten kids, ages 3-10, and ten adults attended this year. Weeks of preparation went into developing a theme for this year’s event, which was the U.S. Army. Some of the themes from past years have been the Olympics and countries of the world.

The camp is normally two days with an overnight stay in the Merrells’ bonus room, but this year’s camp was one very full day. The kids arrived at 8 a.m., had a pancake and bacon breakfast, and then were issued their camouflage T-shirt, canteen, helmet, personalized dog tag and sunglasses. Shirts had the camper’s name and the Bible verse for the camp, “The Lord is with you, Judges 6:12.” Devotions were about two Biblical military heroes — Gideon and David.

True to the Army theme, a former Marine led basic training, including push-ups, jumping jacks, relay races and an obstacle course. Next, adults and kids divided into platoons, hopped on one of three golf carts, and searched for “fallen soldiers” — cardboard GIs that had been hidden on ten acres of land.

Then, big things arrived — an authentic jeep and an Army Deuce-and-a-half. Kids were shocked to see them pull onto the property and immediately swarmed toward them. Owned privately, the vehicles were brought by Bill Craddock and Michael Hoosier, who must have known that the kids would claim their spot and wait for rides. The men obliged, and campers were thrilled.

Cousins’ Camp always has a service project, so after a taco lunch, the kids and adults traveled to the North Carolina State Veterans Nursing Home on the campus of the W.G. (Bill) Hefner VA Medical Center in Salisbury. There, they assisted the veterans with BINGO, captivating the hearts and eyes of the vets. On the way out of the campus, the kids were driven through the National Cemetery and given a short history lesson about military men and women.

Once back on the Merrell compound, campers built forts and had a water balloon battle. After a spaghetti supper, the closing ceremony found campers and adults standing around the pond with a small stone in hand. One by one, they were to tell what they liked most about Cousins’ Camp and then throw their stone into the pond. Almost without exception, they said “cousins.”