1490 on your dial: WSTP is gone, but never forgotten 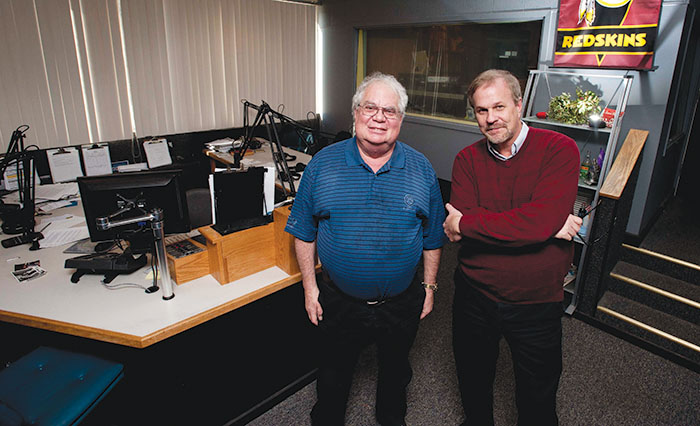 JON C. LAKEY / SALISBURY POST Howard Platt and Kent Bernhardt pose for a photo in the WSTP studios on Feb. 25, 2015.

SALISBURY — Salisbury’s one remaining radio station is known as Memories 1280. But this week the memories belong to WSTP 1490, which went off the air at midnight Tuesday.

It’s hard to believe this venerable AM station is gone.

WBTV reporter/anchor David Whisenant got his start at 1490, as a high schooler.

“It is exactly like I lost a friend,” Whisenant says. “I kept pressing the button on my preset to see if it were really gone.”

As sort of a tribute to a station that meant so much to him, Whisenant says he is going to leave the No. 1 button on his car radio set to WSTP, even though now it’s dead air. He says he’s glad the city still has WSAT 1280.

Talk to former WSTP employees for any length of time, and you can’t help but sense the high standards and competitive fire they had, the friendships they made and the stories they’ll never forget.

Doug Rice will tell you about sleeping in a front room at the station, anticipating the hectic morning of a snow day. Those were the pre-internet days when the local radio stations were the best and fastest way to learn of cancellations.

Many championship play-by-play moments flood in for former Sports Director Howard Platt, who also was part of a longtime morning show team with Kent Bernhardt.

“A lot of my life was spent at that radio station,” Platt says. “It’s not easy to just see it go dark.”

“I could not keep it together,” she says, laughing still.

Then there were the live remotes, Tennent recalls, when she and Bernhardt might be reporting from a ladies mud wrestling match. She sighs in exasperation, mentioning a remote from the old Blue Goose lounge, where she was pinched and poked several times.

Whisenant remembers being a high school deejay at the height of the disco era when WSTP changed its format from the “Top 40 Rock of the Piedmont” to “15 Fever.” One night, as a special event on his 7-to-midnight shift, the station invited people into the large studio in front of his radio booth.

With microphones set up in that studio area, the plan was to teach disco dancing over the air while David spun the tunes.

“It was the most bizarre thing you could do,” Whisenant said. “People would call in and ask, “How do you do ‘The Hustle?'”

The instructors would actually try to talk the listeners through it on the radio.

“It was crazy,” Whisenant says.

But WSTP hit much more than it missed during its 76-plus years on the air. The station launched the careers of many well-known names such as Whisenant, Rice, Bernhardt, longtime Cincinnati Reds announcer Marty Brennaman, Atlanta sportscaster Bob Rathbun and New York on-air personality Helen Little.

Most of the glory years occurred under the guidance of Tom Harrell and Mary Ann Lanningham, who jointly owned the station from April 1956 to July 1, 1995. Phil Kehr also was a longtime station manager.

“I am sad for the community,” the retired Harrell says, “because the people on Main Street and in the area have lost an avenue to reach their potential customers. I hate that.”

By 2014, after a succession of other owners, the Catawba College Foundation and 2B Productions rescued a foundering WSTP in hopes of offering a training experience in broadcasting for students. Meanwhile, improving the station’s signal so it could provide better coverage outside of Salisbury looked to be an expensive fix and contributed to the decision to take WSTP off the air.

The college also owns the other AM station, WSAT.

During his run with WSTP, Harrell says he employed 225-240 people over four decades, many of them industrious high school kids and students from Catawba and Livingstone colleges. They were paid minimum wages for entry-level jobs, but they were learning multiple aspects of broadcasting.

Young employees at WSTP often came to view Harrell as a mentor. He judges that two-thirds of the people getting their start at WSTP turned it into a lifetime career — either in radio or some kind of related field.

WSTP, which went on the air on New Year’s Eve 1939 and broadcast the Rose Bowl on Jan. 1, 1940, was the 13th oldest radio station in North Carolina and the oldest in Salisbury.

Harrell says Salisbury became the smallest city in North Carolina with two AM stations and a daily newspaper.

“It was as competitive as it could be,” he adds. “That was a defining time to be in the business. They (his employees) knew the heat. They knew the fire in the fireplace. The beneficiary was always Salisbury and Rowan County.

Harrell says his employees “worked with me, not for me.” He gives Lanningham credit for computerizing the station early on — “it couldn’t have been done without her,” he says. And overall, Harrell has come to consider his years at the station as “my contribution to the city where I am living.”

“I look back now with a great deal of satisfaction.” Harrell says.

WSTP served as an important local news source. It went through various formats through the years, including Top 40,  disco, country and beach music. For a spell, it moved to a news and talk format, always with sports mixed in. The station seemed to be everywhere, covering high school and college games, local elections, the National Sportscasters and Sportswriters Association events and even parades.

You could hear obituaries daily, those farm reports mentioned earlier, church services, and back in the earlier days, live music shows. Listeners also knew to tune to 1490 for the Washington Redskins, Atlanta Braves and the basketball and football games of the University of North Carolina Tar Heels.

Platt says he will always have fond memories of his play-by-play opportunities, which took him to the American Legion World Series and numerous state basketball and football championships with local teams.

Platt, who now does sports and some play-by-play duties on WSAT, has been a voice of Rowan County American Legion baseball since 1979.

Thanks to Salisbury’s hosting of the NSSA, Platt has had the chance to meet and interview the best in his business. Likewise, he used to interview numerous celebrities and national sports figures at the Bing Crosby golf event at Bermuda Run.

He shared everything with WSTP listeners.

“It was amazing,” says Platt, who also acknowledges missing his morning show with Bernhardt.

“That was a good way to express ourselves,” Platt says. “I really think we had a good following. … I thought it was an ideal combo. We could discuss things, and sometimes it would sound more heated than it was. (Off the air) I’d say, ‘Hey, that was pretty good, wasn’t it?'”

Platt says he’ll never forget reporting on a Gold Hill tractor pull with Rice, who is now president and general manager of Performance Racing Network in Charlotte and a co-anchor on PRN race broadcasts. Bernhardt is production coordinator for PRN.

“There was a time when it was such a vital part of the Salisbury-Rowan community,” Rice says of 1490. “It gave you a lot of pride in what you were doing.”

For a 1,000-watt AM station to cover what it did and produce so many quality broadcasters was pretty impressive, Rice says.

By the time Rice left WSTP in 1988 for his distinguished career in NASCAR, he had worked at the radio station for 11 years. He became morning host and for 11 years the play-by-play man for Catawba Indians football.

“That meant a lot to me personally,” Rice says. He credits many people for pumping in the “energy and sweat equity” to make WSTP special.

Tennent says she doesn’t want to be over-dramatic, but “when I first read and heard WSTP was going off the air, it almost felt like a part of may life — that chapter — was closing.”

She listened to WSTP growing up, especially in the mornings and evenings. Later, she worked at the station for two years after graduating from the University of North Carolina at Chapel Hill.

“I found a home and extended family there,” Tennent says. “It was a life-changer for me. I still keep in touch with many of the people I met.’

Her parents, who were both architects, designed the WSTP building. In the Tennent household, which included five children, WSTP was a constant in the mornings.

“Everything was timed around Bill Henderson’s Countdown and getting off to school,” Tennent says.

Whisenant honed his broadcasting skills at WSTP, where as an account representative he could be creative in producing spots for customers. He wore many hats — from deejay, to color commentator for Legion games, to sales rep for 10 years.

Whisenant credits Harrell for demanding top-notch production, and he thinks that also served him well in his long stint with WBTV.

Rice remembers his own last day on the air on WSTP when a woman listener called in and asked, “What am I supposed to do now?” For years, she had packed lunches, made breakfast and sent her kids off to school with Rice and WSTP’s morning show playing in the background.

“Tomorrow, you’re not going to be there,” the woman told Rice.

It sunk in for good: Rice knew his time on WSTP had made a difference.