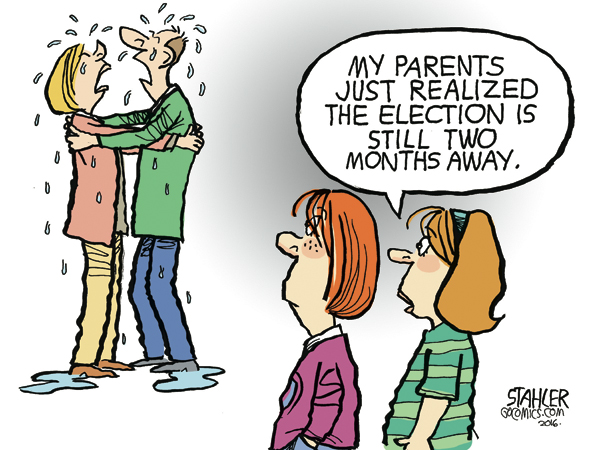 We get caught up in the personalities running for office, often losing sight of the issues that should be the focus of the campaigns. With 10 weeks remaining before the Nov. 8 elections, here are 10 of the top issues (not necessarily listed in importance) voters should be considering.

When people go to the polls, the No. 1 issue on their minds has been and will remain pocketbook issues. How the economy and jobs impact them and those close to them will be a big determinant in ultimate election outcomes.

America’s better tomorrow must begin with improved education. Too many indicators speak to the need to reform public education. Vocational education must be emphasized for those not seeking undergraduate degrees, and costs of higher education must be reduced so that students don’t begin their work lives with staggering debt.

The No. 1 threat to individuals and families is the cost and accessibility of healthcare. The Affordable Care Act (Obamacare) was intended to help insure against healthcare costs. It has succeeded in some areas, but it is a flawed bill that needs triage to survive. Accessibility is a major problem in underserved rural areas. Instead of Congress wasting time trying to repeal ACA, they need to get serious in modifying it to work. Equally urgent is the need to provide mental healthcare so that those afflicted don’t end up broke, in jails, or on the streets.

Recent events underscore the need to renew our efforts in human rights and racial equality. We have come too far over the past half-century to slip back into old practices of discrimination.

Gridlock and burdensome regulation, especially at the national level, is the reason so many have lost faith in government. We want government that works. We want governments that work for the common good, not just special interests or political factions, and we insist that taxes, which we recognize are necessary to pay for services, must be fair to all. Middle class citizens rightly feel they pay a disproportionate share.

Despite what statistics might indicate to the contrary, violence and terrorism are major concerns. The nightly news is filled with too many stories of gun violence in our communities. No matter how powerful the NRA might be, we must have better control over who gets licenses and the types of weapons they purchase. Intelligence agencies must get smarter in identifying potential terrorists and better coordinate with local and state agencies to prevent threats to our safety.

Immigration is a genuine concern, but the nexus of the problem rests with a Congress that is unwilling to pass common sense and enforceable legislation to control those coming to America, at the same time ensuring we neither target certain religions nor nations. We need workers to pick our crops, build our homes and work in technology.

Election reforms are urgently called for. The Citizens United Supreme Court decision opened the floodgates of big money, unidentified independent expenditure groups and corporations in the election process. We can have freedom of speech without permitting unlimited bankrolling of political campaigns by special interests. Redistricting reform at the state level is equally important so that politicians don’t select their voters instead of the other way around.

Seldom mentioned but of major importance is the staggering national debt facing our nation. At the end of fiscal year 2016 our debt was pegged at $19 trillion and is projected to be more than $21.5 billion by the end of the next presidential term. This is an untenable situation and must be slowed and reversed.

On both the state and national level we face an aging and inadequate public infrastructure, much of which was constructed 30 or more years ago and the problems grow worse with an increasing population. We cannot continue to neglect the needs.

Perhaps you can cite others but we will address each of them in this space over the next few weeks.

The better informed we are, the better the decisions we will make come election day.

Tom Campbell is former assistant state treasurer and is creator/host of NC SPIN.