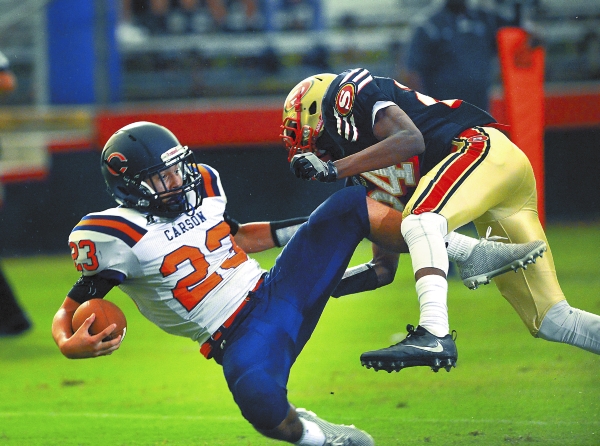 Wayne Hinshaw/for the Salisbury Post ... Carson’s James Kotcamp (23) falls into the end zone for the first TD in the game as Salisbury’s Cameron Horne makes contact.

SALISBURY — Carson’s defense hasn’t shut out an opponent since the 2010 season.
That streak continues — barely.
Carson got two interceptions from senior cornerback Brenden Westbrook and won, 31-7, against Salisbury on Friday. The Hornets didn’t score until jayvee standout Tyrone Johnson put the ball in the end zone with 55 seconds left on the scoreboard at Ludwig Stadium.
“They scored that one against our backups and jayvees,” Carson coach Joe Pinyan said. “But our defensive starters wanted a shutout, and basically they can claim one. Great job by (coordinator) David Johnson and all our defensive coaches.”
Pinyan wasn’t happy with many things in the Cougars’ opener — a 45-3 setback against North Rowan — but the Cougars corrected some of their first-game mistakes. There were fewer jitters — and more hitters.
“We challenged our defense, and they brought a lot more tonight than they did in our first game,” Pinyan said. “They brought more passion.”
The yardage in the game was almost even and both teams had 16 first downs, but Salisbury (1-2) self-destructed with penalties in the first half and with turnovers in the second half.
“I really feel like it should’ve been a 14-7 game, one way or the other,” Salisbury coach Ryan Crowder said. “When we turned it over in the red zone, Carson punched it in. But when Carson turned it over in the red zone, we’d just give the ball right back to them. They gift-wrapped things for us a couple of times, but we just didn’t take advantage.”
Carson (1-1) scored the only touchdown of the first half when James Kotcamp burst through a big hole up the middle on a fourth-and-6 play from the SHS 14.
Salisbury’s most efficient drive of the first half died at the Carson 36 when linebacker Isaac Bell wrestled down Trell Baker for a 3-yard loss and Blake Daniels sacked elusive QB Tyquan Jones.
“We’re up 7-0 at half and our coaches were saying we were OK,” Pinyan said. “But I was very concerned with Salisbury’s speed. They’ve got kids who can be gone in a hurry. Against kids who can score from anywhere on the field, a one-touchdown lead isn’t much of a lead.”
It was still 7-0 midway through the second quarter when Pinyan made his best decision of the game. There was some temptation to go for it on fourth-and-5 at the SHS 45, but Pinyan called on Cole Howard to punt, and Howard’s punt was downed by the Cougars at the Salisbury 2.
Two plays later, Bell blitzed and helped create havoc and a safety.
“I timed the snap count pretty good, and then we had a lot of guys in there making the tackle,” Bell said.
The great punt and the safety were the turning points.
After Salisbury’s free kick following the safety, Carson used a fast-tempo offensive series to roll down the field for a touchdown. Bailey Rayfield put the ball in the end zone to make it 15-0, and White’s two-point conversion pass to Bell made it 17-0.
It was still far from over, as Salisbury’s defense provided two opportunities to get back in the game when linebacker Teven Mullenax and DB Byron Goodlett recovered fumbles deep in Carson territory.
But Mullenax’s recovery was nullified by Westbrook’s first interception.
“It looked like they were trying to trick us, and they were going to throw it to the tight end,” Westbrook said. “I was watching him, and then the wind helped me. It kind of stopped the ball, and then the ball fell right in my hands.”
Goodlett’s fumble recovery was immediately negated by an interception of QB Griffin Myers by Carson spur Austin Cain.
A Salisbury fumble led to a 5-yard scoring run by Cole Sifford for a 24-0 lead with 5:56 remaining.
Jones threw three terrific passes to Cameron Horne and made a nice scramble to push the Hornets down the field to the Carson 29, but then Jones was picked off by Westbrook again, and Westbrook took this one 80 yards to the house.
Crowder said Jones saw a blitz coming and was just trying to throw the ball out of bounds to avoid a sack, and that’s also how Westbrook saw it.
“He was throwing it away, and I barely caught it inbounds,” Westbrook said. “Then our spurs made some great blocks, and I was able to go all the way.”
That made it 31-0.
Then the Hornets got that late score to avert the shutout.
But it was still a night that belonged to Carson’s defense.
“We came in too cocky for the North game, but we learned some things,” Bell said. “Tonight we pinned our ears back and flew around. Give most of the credit to our three guys up front. They forced Salisbury’s backs to us and we made the tackles.”
Sifford and Rayfield combined for 150 rushing yards, but Carson didn’t have big offensive stats.
Pinyan still had some praise for the way QB Owen White managed the game.
“I know Owen is a little disappointed that we didn’t put up bigger offensive numbers, but he had a good game,” Pinyan said. “He checked off things at the line and got us into the right plays. That really helped us.”

Davie starts strong, but gets taken down 32-6 by…