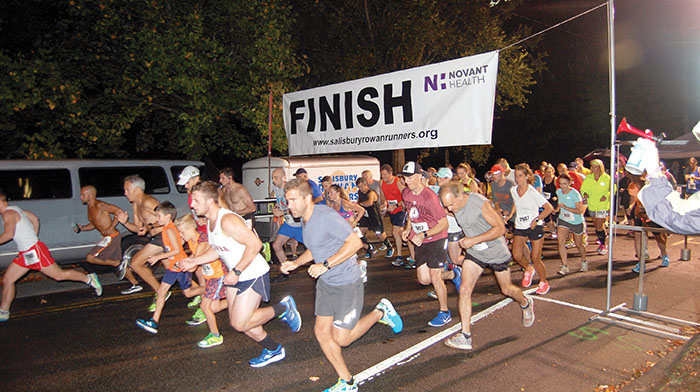 Amanda Raymond/Salisbury Post The United Way of Rowan County held its annual Sunset Run on Friday with about 63 participants.

SALISBURY — A little rain and wind did not stop runners from coming out to support the United Way of Rowan County.

The United Way held its annual 5K Sunset Run that started on Fulton Street and took runners through the Fulton Heights Neighborhood on Friday evening.

About 63 runners participated, and a few children participated in the Novant Half-Mile Kids’ Fun Run before the 5K.

Proceeds from the race went to this year’s United Way campaign, “It’s the Right Thing.”

Jackie Harris, resource development and marketing for the United Way, said the threat of rain probably kept people from running, but there was never anything more than a drizzle.

The day’s cloud cover led to cooler temperatures that the participants appreciated.

The 5K started at 8 p.m. and the first runners started crossing the finish line less than 20 minutes later.

Salisbury native Joshua Readling was the overall first place male winner, with a time of 18 minutes and 24 seconds. He started running 5Ks in 2008 and said he enjoys competing against other people, as well as meeting other runners.

Readling said the cooler weather made for a good run, especially after running in the 90-degree weather of this summer.

Maleah Pinyan, the overall first place female winner with a time of 19 minutes and 29 seconds, said she also enjoyed the weather.

“I think the weather was perfect for tonight,” she said.

Pinyan is also from Salisbury and said she likes trying to beat her own times. She has been running for 14 years and thinks running is a great activity because you don’t need a team or gym to do it.

“It’s definitely a sport you can do throughout your life,” she said.

George Kimberly, from Mocksville, said he likes the Sunset Run because the race’s course is flat.

“There are no big hills,” he said.

Kimberly has been race walking for 16 years and likes to do it to stay in shape. He runs one to two races a month in different cities, and also competes in the Senior Games.

The Sunset Run was his 16th race this year.

Steve Austin, from Charlotte, is also an avid runner. This race was his 43rd one, and he is running two more over the weekend. The 69-year-old ended up winning overall first place male senior grandmaster with a time of 26 minutes and 13 minutes.

He has been running for 36 years and said he liked coming together and meeting other runners.

“The running community are great people,” he said.

John Struzick, manufacturing financial manager for Innospec, said it was the company’s second year as the overall sponsor for the race. He said the company is happy to help the United Way raise money so they can focus on helping the community.

“Any little thing that we can do to help, that’s what it’s all about,” he said.

“It’s a great way to get exposure,” she said.

The United Way thanks Innospec, Cheerwine, Chick-fil-A and Novant Health for sponsorships. Thanks also goes to the Salisbury Rowan Runners for organizing and managing the race; the city’s police, fire and utility departments and the participants.

The overall winners were: