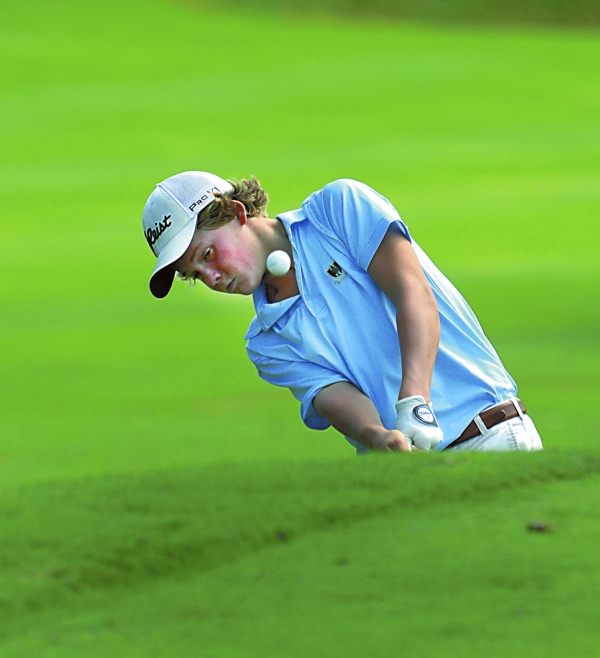 Wayne Hinshaw/for the Salisbury Post ... Thirteen-year-old Charlie Barr chips to the green on the par-3 14th hole at the Country Club of Salisbury on Saturday. He and partner Troy Beaver, 22, go against teenagers Michael Childress and Nick Lyerly today in the Labor Day tournament second round.

SALISBURY — The 63rd annual Crowder-Dorsett Memorial Labor Day 4-Ball golf tournament teed off Saturday and at the top of the field, it may be one of the most competitive in a long time.

There are also several underlying themes at play as 16 teams squared off in the championship flight on opening day.

First, there is the talented young golfer factor as Nick Lyerly and Michael Childress, both 17 and two of the top junior golfers in the state, dominated qualifying with a 64, then easily won their opening match at the Country Club of Salisbury course Saturday 6 and 4 over Michael Dorsett and Ross Brown.

That puts Childress-Lyerly in a second-round match today against 13-year-old Charlie Barr and his “elder” partner Troy Beaver, 22, a recent Elon University graduate. They edged seventh-seed Kyle Venrick and Wally Eidson, 2 and 1, in the first round.

Secondly, there is a definite former Catawba College golfer flavor in the top flight as Jon Allen and Derek Paschal teamed to win their opener Saturday, as did 2006 Catawba grads Chris Rae and Chris Nesbitt.

The third factor is the Country Club course itself as tournament organizers implemented the use of deep black tees for players in all 10 of the regular men’s flights, adding about 300 extra yards to the length of the Donald Ross-designed course. Club golf professional Chad Campbell noted that the longer black tee placements  served “…as a leveler or equalizer that set the flights more correctly and grouped golfers more accurately according to their real ability.”

“It definitely makes the course a lot harder,” stated Phil Miller, who is defending tournament champion along with Andrew Morgan. “It changes the club you are hitting to the green many times and it makes the par threes much longer and more difficult. We are thankful we were able to par all four of the par-threes today.”

Miller and Morgan, as defending champions, earned the top seed in the championship flight and had their hands full all afternoon with No. 16 and former champions Chris Owen and Ken Clarke, before prevailing on the final hole, 2-up. They closed it out when Morgan chipped in for a match-clinching par from about 40 feet off the 18th  green, right after he skulled his third shot about 10 feet.

“I was just trying to make a par,” Morgan noted. “Sure, it was some luck there, but there was also no pressure. We had a great time playing Ken and Chris and we love those guys.”

“This is a great field this year with a lot of great amateur golfers,” said tournament chairman Jake Alexander Jr. “In addition to the championship flight, there are so many great players in the first and second flights as well, but it is like that every year as good as the golf is and as tough as the course is set up with the black tees.”

As in the past, the focus of the tournament is the championship flight, with Saturday’s opening matches drawing large galleries usually reserved for the Monday finals.

The top two seeds each drew sizable crowds, especially Lyerly and Childress. The highlight of their 6 and 4 win over Dorsett and Brown was a 100-yard shot to the No. 3 green by Lyerly that landed past the hole and spun back in for an Eagle. “That kind of got us going,” said his partner Childress, a junior at the Cannon School, who won this event at age 14 with Charlie Graeber. “We got off to a steady start and played off each other well all day.”

Lyerly, who won the N.C. Amateur earlier this summer, played in the U.S. Amateur along with Childress, and had a high finish in the national Big I tourney in California, says the longer course for the Labor Day was not an issue for him. “I am used to playing longer courses,” said the East Rowan High School senior. “But it definitely makes the par-threes tougher.”

Now the medalists face off today against Beaver and Barr with a combined foursome age that is less than that of many of the individual super senior competitors.

“Obviously the competition  is a lot tougher,” said Barr who is playing in his first championship flight after teaming with his father, Matt, last year in the sevneth flight. “There are a lot more good scores being thrown out there at this level.”

“We played together well and both of us were in a lot of holes and picked each other up,” said Beaver, who noted he had played quite a bit with the younger Barr this summer..

The third seed, Kevin Lentz and Patrick Gregg, survived a tight battle with Jared Barnette and Justin Lefler, 2 and 1, and will now face the team of Lee Frick and Blake Wray today.

Frick and Wray won, 4 and 3, over the sixth–seed, Clark Alcorn and James Kyger, who battled hard despite a broken left foot. “We had a game plan of taking it shot by shot,” Wray said. “We didn’t really make any big mistakes and that was key.”

The fifth seed of Eric Mulkey and Josh Brincefield prevailed, 3 and 2, over Alan Fesperman and Bob Humble. They will now face Allen and Paschal, one of the two teams of former Catawba golfers. The other former Indian duo of Nesbitt and Rae will have to face the defending champions Miller and Morgan this afternoon.

Championship flight matches will tee off this afternoon beginning at 1 p.m. — at No 1.

Note: Childress and Lyerly also had the top fashion statement of the day, wearing the same kind of hat, shirt and shorts. The shirts were from the U.S. Junior Amateur that they competed in back in July.