Livingstone stunned in season-opener at Benedict 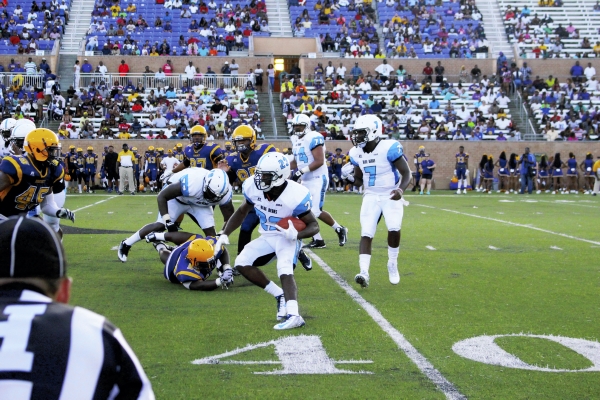 Unlike the 2015 opener, when Livingstone walloped the Tigers, 49-6, in this same game, the Blue Bears struggled mightily on offense as two red-shirt freshmen quarterbacks and inadequate offensive line play could manage just 119 total yards.

Three pass interceptions didn’t help either, and one set up Benedict’s field goal.

“You can’t win a football with 13 penalties and three turnovers,” said Livingstone head coach Daryl Williams. “Our first team rule is don’t beat yourself, but that’s exactly what we did. We had 7 to 10 dropped passes and had holding penalties on every big play we had.

“We’ve got to go back to the drawing board, but they’re all correctable mistakes,” continued Williams. “I have full confidence in our coaching staff and players that we will get it corrected by next Saturday.”

Blue Bears’ quarterback Dallas Bruton, a red-shirt freshman starting his first collegiate game, threw an interception late in the first half, setting Benedict up at the 5-yard line.

But the Livingstone defense came up big, stopping a running play for a four-yard loss and nicely defending two pass plays. The Tigers settled for a 26-yard field goal from Tory Mimbs, with 2:51 left in the half, tying the game at 3-3.

“I am proud of the way the defense played,” said Williams. “They played their hearts out and didn’t allow a touchdown. That unit got it done time and time again, but the offense couldn’t match that performance.”

If the offensive woes weren’t enough, a special teams blunder led to what turned out to be a game-deciding safety.

After the game-tying field goal, Livingstone shot itself in the foot will an ill-advised kickoff return from freshman Justin Ruffin, a former Salisbury High star.

Ruffin brought the deep kickoff out of the end zone to the 10-yard line, but retreated to escape the pursuit and was tackled at the 3-yard line.

“That was just a kid trying to make a play, so I can’t fault the effort,” said Williams. “He’ll learn from it.”

Livingstone had a nice gain on first down to get out of trouble, but a holding penalty wiped it out and put the ball at the 1-yard line. On the next play, Benedict’s Chris Williams tackled running back Jarius Richardson in the end zone for a safety. The Tigers led, 5-3.

It was almost worse but the Blue Bears caught a huge break on the last play of the half.

Mimbs was in to attempt a 48-yard field goal with seven seconds left, but a Tigers’ false start pushed the Benedict kicker out of his range. Instead, Benedict QB Mason Duckett cut loose a Hail-Mary pass that was caught by receiver Devontae Alfred at the Livingstone 1-yard line. The Blue Bears were able to wrestle Alfred down as time expired.

Williams took a chance with an onside kick to begin the second half, but Benedict recovered as the Blue Bears were whistled for illegal procedure.

Again, the Livingstone defense saved the day by denying the Tigers even a field goal on that possession and the next one, coming from an interception thrown by Bruton.

Thaddeus Bell came on to relieve Bruton at quarterback, and after a couple of completions, Bell also turned the ball over with an interception.

Mimbs missed his second 42-yard field with 5:40 left in the game and the Blue Bears began a final drive at their own 25. A big third-down pass from Bell to receiver Spencer Ludin advanced the ball to near midfield, a 20-yard play.

Bell scrambled on the next play for 10 yards to the Benedict 46-yard line. After an incomplete pass, a helmet-to-helmet penalty on a Tiger defensive back on a pass play set Livingstone up at the Benedict 31-yard line.

But the Blue Bears’ offense immediately began backing up again. A reverse with Marcus Baisey running the ball on first down lost 13 yards. After another incomplete pass, a near interception, the Blue Bears faced a big 3rd-and-22 play.

Protection broke down and Bell had to scramble for what he could get — six yards. On 4th-and-16, after a Livingstone timeout, Bell completed a pass for an apparent first down, but holding brought it back.

Finally, on 4th-and-31, Bell was sacked at his own 39-yard line, virtually ending the game with 1:52 remaining. The Blue Bears had just one timeout left and Benedict ran out the clock with three running plays.

Livingstone scored first, a 25-yard field goal by freshman kicker Tyler Keene. Filling the shoes of long-time starter Leo Manzo, Keene came all the way from Seattle to kick and punt for the Blue Bears.

Keene’s kick finished off a 10-play, 44-yard drive that was aided by two Benedict penalties. Bruton hit receiver Everett Ransom for 13 yards, giving the Blue Bears a first down at the 8-yard line.

But two running plays gained nothing an incomplete pass led to the Keene field goal and that was as close to the end zone that Livingstone would get the rest of the game.

Livingstone managed just eight yards rushing, counting losses. Benedict fared only a little better with 19 yards. The Tigers did have the advantage in passing yards, 169 to 111 for the Blue Bears.

A total of 28 penalties were whistled between the two teams, for 266 yards. Livingstone had 13 of those miscues, for 134 yards.