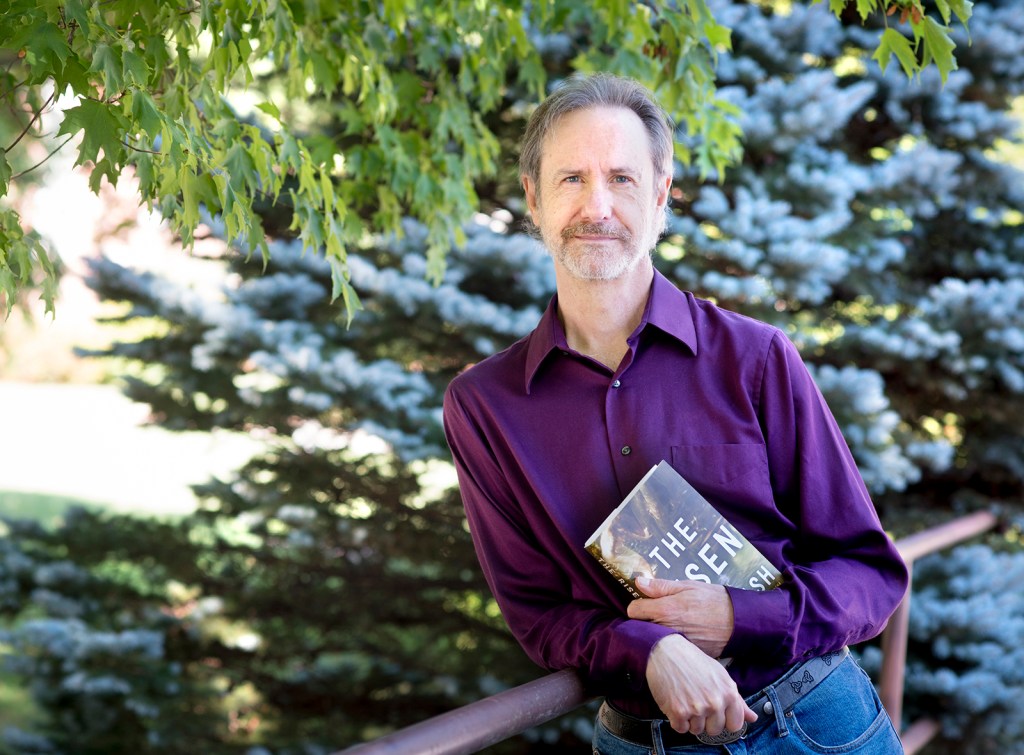 “The Risen” hits bookstore shelves Tuesday, Sept. 6. It is described as a suspenseful and evocative tale, written in Rash’s vivid, lyrical style and is already receiving positive reviews.

“I thought it would be interesting to have a story where there are two brothers, to get that kind of conflict between brothers that goes back to Cain and Abel,” Rash said from his small office on campus. He describes the impetus for the novel as based on an actual unsolved murder that he has recalled through the years and “finally decided to write about it.” He placed the novel into the very real setting of Sylva and Jackson County.

Rash grew up in the small Cleveland County town of Boiling Springs. “It is also a book about what it felt like to be in Western North Carolina, small-town Appalachia, in the late ‘60s, when so much was changing in the United States and yet it seemed like, where I was living, nothing was changing,” he said. “Obviously, on TV you would see scenes of riots, love fests and hippies, but it could have been on Mars. Though with Vietnam, it was real in that young men from your town were going off and some not coming back. But it still felt so insular.

“So, the novel is about this murder in this small town, this community, and the secrets that have been kept over decades.”

If a new novel with a great initial reception isn’t enough, Rash can add another accolade to an already impressive list. His previous novel “Above the Waterfall” is the Prince of Tides Literary Prize Winner in the Southern Independent Booksellers Alliance’s 2016 Pat Conroy Southern Book Prize competition.

The awards are named for the late Pat Conroy, who lived in Beaufort, South Carolina, as a way to honor one of the region’s most enduring, iconic writers and to recognize him as a force for good in the world of Southern books and literature. The honor is especially noteworthy for Rash.

“Pat was a very good friend and a great guy, in some ways just a larger-than-life guy,” Rash said. “He was very good to me, advocating my work, very generous that way to me, and to other writers as well.”

Conroy, the author of many acclaimed novels and memoirs, including “The Great Santini,” “The Prince of Tides” and “My Losing Season,” died in March. “He was very gregarious,” Rash said. “I really enjoyed his conversations, and one thing I learned very quickly was any story I could tell – he was going to top me. I miss him.”

More than 140 books received nominations from a Southern Independent Booksellers Alliance store or customer for a Pat Conroy Southern Book Prize. All nominated books had to meet criteria of being Southern in nature or by a Southern author and published in 2015.

Rash’s award-winning “Above the Waterfall” is told through the voices of a sheriff nearing his retirement and a park ranger haunted by her past. Both are drawn to the other through a reverence for the outdoors and the natural world. Underlying themes of contemporary Appalachia are found throughout the book, built around the poisoning of a mountain stream, portrayals of contrasting poverty and scenic beauty, increasing tourism and the plague of methamphetamine.

“Above the Waterfall” now has been published in Europe, Australia and Asia, and has garnered good international reviews and sales, particularly in England, Ireland and France.

Rash has six other novels as well as collections of short stories and poetry to his credit, and movies based upon his novels.

“While my landscape and the way my people speak may be very different, ultimately what I’m writing about is what it means to be alive in this world – love and hate and fear, all those things are universal and people connect to that,” Rash said. “At the same time, they find that Appalachia is a place they are curious about. So part of my goal is to render that as true as possible and as vividly as possible, but very often subvert stereotypes of the region.

“Every story, novel and poem I’ve written is connected in some way to this sense of place. In no way do I see that as a limitation. This is the one place I know best.”

Rash’s poetry and fiction have appeared in more than 100 journals, magazines and anthologies. He has been awarded an NEA Poetry Fellowship, the Sherwood Anderson Prize and the Novella Festival Novel Award and is twice winner of O. Henry Awards, as well as the Frank O’Connor International Short Story Award.