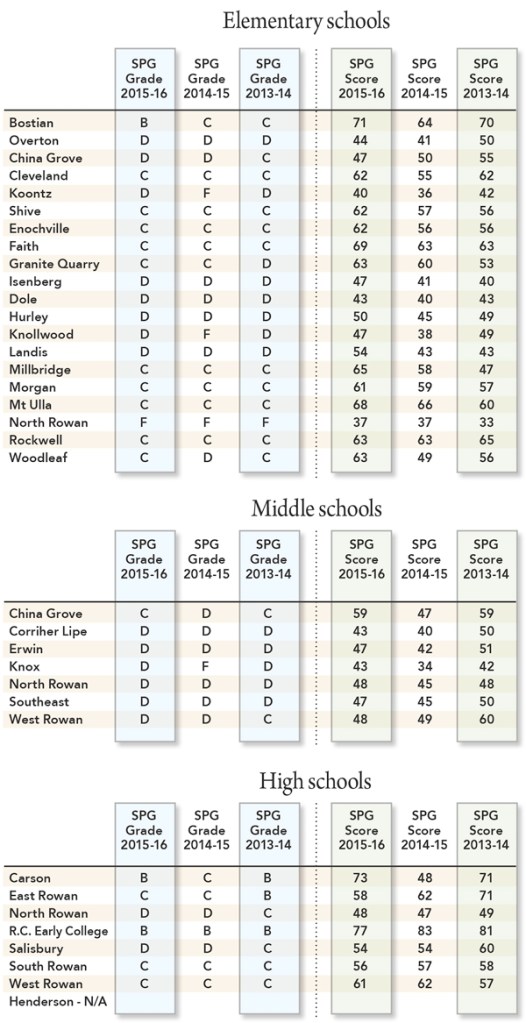 The letter grades for each school in the county. Chart by Andy Mooney.

SALISBURY — Rowan-Salisbury Schools can breathe a sigh of relief after the district was declassified as a low-performing school district Thursday.

Test scores released by the state show that Rowan-Salisbury is pulling itself to its feet, with school performance grades (SPG) returning to 2013-14 levels after they plummeted in 2014-15.

“For a school district to make that change in one year, I think is another cause for celebration,” said Alesia Burnette, director of accountability services with the system.

“Today the story to me is just about growth,” Superintendent Dr. Lynn Moody said.

In an interview last year, Moody attributed that year’s drop to an adjustment to new instructional practices and the integration of one-to-one digital devices. The 2014-15 testing season was the first year the district distributed iPads and laptops to all students.

“Although this was a great deal to digest for teachers, they embraced the change and believed that we were headed in the right direction in providing extraordinary learning environment opportunities for our students,” Moody said Thursday in a press release. “Although we are not where we want to be, the results of this second year of implementation is what we are celebrating – change is happening!”

School performance grades rely on test scores and, to a lesser extent, improvement or growth of students. The final grade is 80 percent test scores and 20 percent growth or improvement. A low-performing district is defined by the state as one in which the majority of schools received a low letter grade or growth standards. Low-performing schools for each district are listed in the state’s report. And this year, RSS passed, albeit narrowly, with 14 schools making the state’s list, down from 19 in 2014-15.

“We know we are not where we want to be at every school and at every grade level,” Moody said in an e-mailed release. “But we are celebrating the overall indications that we are heading in the right direction.”

Of the district’s 35 schools, seven — 23.5 percent — received an improved letter rating from the state, and no school was given a lower grade than it received the previous year. In order to be declassified, a majority of the district’s schools needed to receive a C or higher or to exceed growth expectations.

Growth expectations are determined by the state’s Education Value-Added Assessment System (EVAAS), which examines the impact of teachers, schools and districts on the learning of their students in specific courses, grades and subjects.

By the numbers, 88.2 percent of Rowan-Salisbury schools increased their performance grade score and earned a higher point value, according to an e-mail received from the Rowan-Salisbury testing and accountability department.

Three schools climbed to a B grade this year — in 2015, Rowan County Early College was the only school to receive the rating. Joining it this year are Bostian Elementary and Carson High School.

“Seeing the progress of our school system over the past year is both exciting and encouraging,” said Josh Wagner, Board of Education chair, in an e-mailed press release. “I hope that this positive progress will be the catalyst for ultimate future success.”

The shock of the 2014-15 scores was that three schools fell to an F rating: Koontz and Knollwood elementaries, and Knox Middle. This year, all three have returned to the D grade they held in 2013-14, leaving North Rowan Elementary with the district’s sole F rating.

The majority of district schools kept to the middle of the road with a D (17) or C (14) rating. The trend is a little lower than the state average, the majority, 44.1 percent, are Cs or Bs, 25.8 percent. Generally, any school that receives a rating of D or lower is tagged as a low-performing school, but three D schools — Hanford-Dole Elementary and Knox and North Rowan middle schools — exceeded expected growth and were removed from the state’s low-performance list.

But 15 schools did not meet growth expectations, and of the 11 schools that fell in 2015, five kept an even keel this year and were unable to shake a lower rating. Those schools are China Grove Elementary, East Rowan High School, Salisbury High School and West Rowan Middle School.

The state report also lists performance composites — the percentage of students demonstrating grade level proficiency and achieving at least a level III on state assessments. According to the RSS accountability department, 91.4 percent of district schools showed improved or increased performance.

According to the accountability department, of the 16 schools that did not meet growth expectations, 10 showed increased growth as measured by EVAAS, and four increased their growth by more than five points. Eight schools exceeded expected growth, over one school from last year.

“I think this year’s really going to be our year,” Moody said.