KCS names 2016 Teacher of the Year 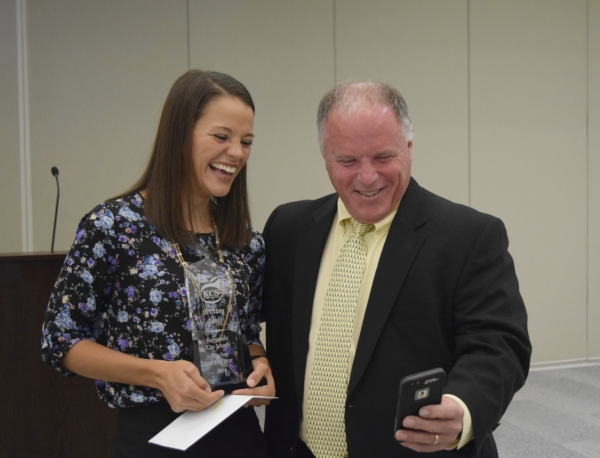 KANNAPOLIS — Teaching is all about passion. That was the theme of the day at a Kannapolis City School’s breakfast held Thursday morning. The district named Brittany Banks, a kindergarten teacher at Shady Brook Elementary, its 2016 Teacher of the Year, but Superintendent Daren “Chip” Buckwell said it was a difficult decision.

All eight nominees were “champions for children,” Buckwell said.

Brian Cesca, a member of the selection committee, agreed. During remarks, he said that being a great teacher is about more than engaging children in the classroom and having students earn grades — it’s about impacting the lives of children.

“It’s about being a life-shaper,” he said.

A good teacher instills a love of learning and also helps shape their students into better people. And that, he said, described all of the nominees.

“Every single one of the teachers we talked to are all deserving of this award,” he said.

Will Gibson, principal of Shady Brook, spoke highly of Banks, saying that she was a good leader as well as a good teacher. In the classroom, Banks builds close relationships with her students and teaches them a love of learning.

“And that’s no small feat for anyone who’s ever worked with a 5 year-old,” he said.

At Shady Brook, Gibson said, Banks is a leader, and someone who wields influence and helps set the pace and the trajectory for the rest of the staff. Gibson said that Banks makes Shady Brook, and Kannapolis City Schools, a stronger community.

“When you send your child to school, isn’t someone like Brittany Banks exactly what you look for?” he asked.

When she accepted the award — a $1,000 check and a trophy — Banks said she was shocked at the win.

“I cannot be more thankful,” she said.

Banks earned her bachelor’s degree in elementary education from UNC Charlotte, and is a member of the National Education Association and the N.C. Reading Association.

Shane Dagenhart, a social studies and world history teacher at A.L. Brown High School, was the runner-up Teacher of the Year.