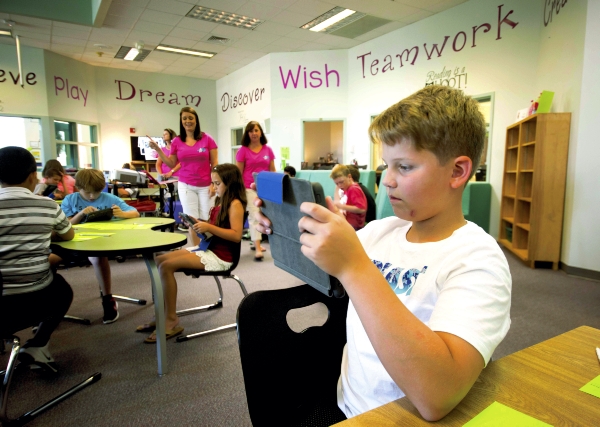 Brooks Overcash listens to instructions on the setup of his school iPad. Fourth- and fifth-grade students gathered in the media center at Enochville Elementary on Wednesday morning to be issued iPads by the school system. Students were reissued the same iPads that they had last year, which were wiped clean and upgraded over the summer. Jon C. Lakey/Salisbury Post

The first week of school means new teachers, new school supplies, new lessons and a readjustment to early mornings — but in Rowan-Salisbury Schools, it also means something else: technology. This week, each student between third and 12th grade will be reissued a laptop or iPad. Over the summer, each device was wiped clean, restored to factory settings and updated.

Teachers will be able to request specific apps and automatically drop them onto their student’s devices. And each device now features a lock-system function that requires the assigned student’s ID and password to use — rendering it useless to anyone else. The district also has a new management system that allows it to monitor and pinpoint the location of the devices should they become lost or stolen.

Students receive the same device that they had the previous year, and Smith estimates that about 12,000 iPads were deployed this week. Devices are available to kindergarten through second-grade students during the school day, but they are not allowed to take them home.

In order to receive their laptop or iPad, students had to make a rental payment, sign a responsibility agreement and watch a video. For families who have not completed device requirements, that information can be found at www.rss.k12.nc.us/news/one-one-parent-night-training.