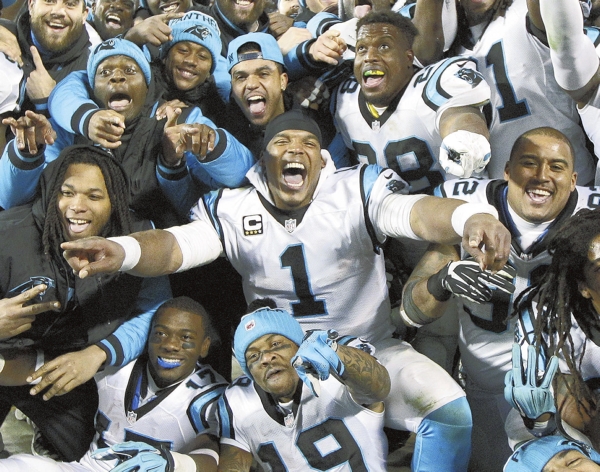 FILE - In this Jan. 24, 2016, file photo, Carolina Panthers' Cam Newton celebrates with teammates during the second half the NFL football NFC Championship game against the Arizona Cardinals in Charlotte, N.C. For the first time since the NFL created its current divisional structure back in 2002, there is talk of a potential dynasty in the NFC South. None of the division’s four teams managed even two straight first-place finishes until the Carolina Panthers did it in 2013 and 2014. Last season, the Panthers made it three straight and advanced to the Super Bowl. (AP Photo/Chuck Burton, File)

For the first time since the NFL created its current divisional structure in 2002, there is talk of a potential dynasty in the NFC South.

None of the division’s four teams managed even two straight first-place finishes until the Carolina Panthers did it in 2013 and 2014. Last season, the Panthers made it three in a row and advanced to the Super Bowl.

This season, Carolina remains the clear favorite. None of its divisional challengers — the Atlanta Falcons, Tampa Bay Buccaneers and New Orleans Saints — managed winning seasons in 2015.

The Panthers hemorrhaged some proven talent in free agency, particularly with All-Pro cornerback Josh Norman’s leaving for Washington. Yet Cam Newton remains at quarterback for an offense that has all but one starter back and might be the most potent in the league.

“That’s our expectation and something we’ll strive to do,” Newton said.

Carolina’s defense still has most starters back, while promising young players have competed to fill vacancies created by Norman’s departure, and the retirements of defensive end Jared Allen and cornerback Charles Tillman.

As far as All-Pro linebacker Thomas Davis is concerned, Carolina’s 2016 roster has more talent overall than a year ago.

“No question about that. I feel like we have gotten better in the offseason as a football team and with the additions that we have made to this team,” Davis said. “When you look at the competition level across the board, I think it has raised everyone’s level of play. We are definitely heading in a great direction.”

Here are some other things to know about the NFC South:

SECONDARY CONCERNS: Carolina will have two new starters at cornerback, and the players most likely to step in are both rookies: James Bradberry and Daryl Worley. The Panthers led the NFL in takeaways last season with 39, and the secondary was a big reason. But defensive leaders such as Davis tend to downplay the extent to which turnovers at those key skill positions could become a liability.

“These young guys have come in and done everything that has been asked of them,” Davis said. “The coaches are really good at what they do and they will get those guys ready. … We have a lot of faith in our young players.”

Offensively, the Panthers look as good as ever — and that’s saying something for a franchise that scored an NFL-best 500 points, and which has posted at least 100 yards rushing in an NFL-best 32 straight games (including playoffs).

RYAN’S RESPONSE: Falcons quarterback Matt Ryan is coming off one of the worst seasons of his largely productive career. Despite having top receiver Julio Jones in all 16 games, Ryan’s 21 TD passes were his fewest since his rookie season in 2008, and he threw 16 interceptions.

If those moves pan out, the Falcons might improve upon the eight victories in 2015 in coach Dan Quinn’s first season.

BETTER BUCS: Tampa Bay has finished last in the NFC South five straight times, hasn’t made the playoffs since 2007, and has changed coaches three times in four years. But the offense showed potential under top overall 2015 draft choice Jameis Winston, who passed for more than 4,000 yards and 22 touchdowns. Now he’ll be under a new head coach in Dirk Koetter, who also has to be encouraged by moves made to improve his defense. The Bucs drafted cornerback Vernon Hargreaves III and defensive end Noah Spence in the first two rounds after signing three new starters in free agency: cornerback Brent Grimes, pass rusher Robert Ayers, Jr., and linebacker Daryl Smith.

SAGGING SAINTS: Coach Sean Payton, who received a lucrative extension despite consecutive 7-9 records, hoped his team was moving in the right direction when it finished 2015 with three victories in its final four games. Yet, in three preseason losses this summer, New Orleans hasn’t demonstrated its offensive line can consistently protect 37-year-old star QB Drew Brees, or that its defensive line has considerably improved a pass rush that was anemic in 2015.

The secondary is young and largely unproven, particularly after the release of veteran cornerback Keenan Lewis during training camp.

Depth at numerous positions also is a concern because the Saints were constrained in free agency by meager salary cap space.

Financial terms of the deal were not released Wednesday.

Brown, a veteran of five NFL seasons, is expected to backup starters Kurt Coleman and Tre Boston while top reserve Dean Marlowe continues to recover from a hamstring issue.

Brown has played in 55 career games, starting 20. His best season came in 2012 with the New York Giants when he started 11 games and had 66 tackles and eight interceptions for an NFL-leading 307 yards returned. He also broke up 11 passes that season and forced two fumbles.

Brown was a seventh round pick by the Raiders in 2010.

He previously was with Carolina for four days leading up to the 2011 regular season before being cut.