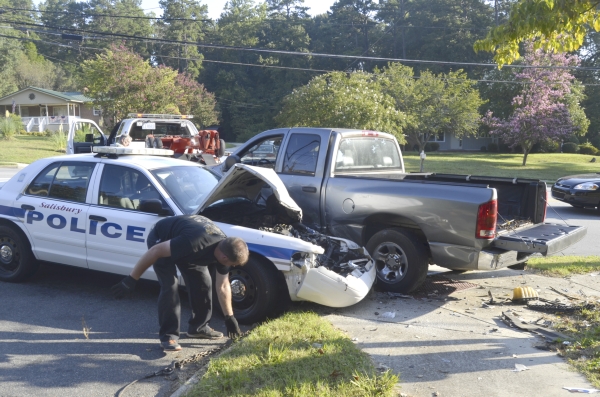 Salisbury Police officer B.S. Parry received minor injuries following this vehicle crash Wednesday morning at the intersection of South McCoy Road and Statesville Boulevard. The driver of the pickup, Gary Atwell, who was not injured, said he didn't see the officer as he pulled out of South McCoy Road. He was charged with not having a license and for a moving traffic violation. Shavonne Walker/Salisbury Post

SALISBURY — A Salisbury Police officer received minor injuries Wednesday in a two-vehicle collision in which he was struck by a pickup.

Officer B.S. Parry was traveling in his police cruiser on Statesville Boulevard when he was struck by a gray pickup driven by Gary Atwell, 56, of Spencer.

Atwell told officials he was pulling out of South McCoy Road and didn’t see the officer. The police car had major damage to the front, and the side of the pickup was damaged. Atwell declined to comment.

Parry received a knot on his head, likely from the airbag deploying, and some scratches and abrasions. Both men were seen up walking around.

The collision occurred around 8:04 a.m. with police blocking one side of the road and having motorists detour at Milford Drive.

Atwell was charged with not having a license and a traffic violation for not yielding the right of way to another vehicle entering an intersection from a different highway.