Rock, paint, turtle: Artist transforms an outcropping in Faith. Is this the start of something? 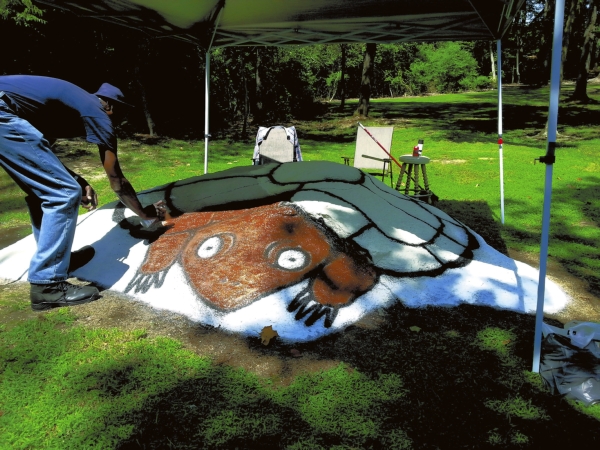 FAITH — Brenda Sutton and her husband worked long hours cleaning out an overgrown, mostly wooded area next to apartments they own on Fraley Street.

They had to chew up about 52 trees in the process, and the couple also helped Joyce Dutch, who lives next to the apartments, clear off some of her property.

During the work, Brenda kept coming across a box turtle, no doubt upset over the disruption in his habitat. Brenda says she has always seemed to attract wildlife.

“I didn’t keep hunting him, he kept finding me,” she says. “Critters just like me, I guess.”

The cleanup made the area look more like a park than an overgrown tract, and it also revealed a significant rock outcropping, the kind so common in this area of eastern Rowan County. It straddled the property line between the Suttons and Dutch.

The lady across the street called Brenda over one day and asked when she was going to move the big tarp, which was what the rock looked like from her vantage point.

“They thought I had stuff covered up beneath it,” Brenda said.

The exchange started the ideas turning in Brenda’s head, and they made her think of Joe Heilig, the street artist in downtown Salisbury who daily positions himself outside of Innes Street Drug on South Main.

Heilig had sketched friends of Sutton’s — a picture of them with their three dogs in a Christmas scene —  and whenever Brenda was downtown, Heilig was always wanting to draw her in exchange for a few dollars to support himself. A couple of times, Brenda invited him over to Uncle Buck’s with her for a dinner.

“Maybe he could do my rock for me,” Brenda says she thought to herself, “and I won’t have people asking me what’s under the tarp anymore.”

Sutton drove Heilig to Faith so he could see the rock in question.

“I just thought it looked like the shape of a turtle,” Brenda says, plus a part of her wanted to honor the box turtle she had kept seeing during all that work.

While they were in Faith, Sutton also drove through other parts of the town. Joe said a rock at Shiloh Church could easily be transformed into a school bus. One at the Lutheran cemetery looked like a giant beetle to him.

It prompted Brenda to start thinking again, which is dangerous.

“I wonder if I could get other people to paint their rocks?” she asked herself.

Brenda and Heilig decided their turtle rock should be whitewashed first — that is, given a solid paint background onto which it would be easier for Heilig to sketch and paint.

Brenda took care of that on a Sunday and Monday. On Tuesday, she picked up Heilig in Salisbury. They bought their paints — Heilig had decided spray-painting was going to work best — and by 12:30 p.m. or so, he was drawing out the turtle with giant black magic markers and painting away.

Brenda thought the project would take Heilig several days. But he was finished by about 5 p.m. To serve as his guide, Heilig worked off a photograph of the box turtle Brenda had taken, plus some images from the internet.

Sutton paid Heilig $100 — “I didn’t think that was very much at all,” she says — and also bought him some extra art supplies. She took care of his paints for the turtle, food and drinks.

Now that Sutton has her box turtle, she’s  wondering if the idea shouldn’t be expanded.

“Granite Quarry and Faith are just covered with rocks,” she says.

She thinks there are plenty of other artists who could find creative ways to paint additional rocks. And who knows, if enough were painted, maybe people would start driving to Faith and Granite Quarry just to see their rocks.

Sutton says she called town hall in Faith to ask whether she could be placed on the town board’s agenda next week. She acknowledges she was met with skepticism over what role the board could play in promoting her idea.

But she contends the town board could help her in identifying other people who have rocks, given how outcroppings have proved so bothersome when infrastructure such as water and sewer lines have been contemplated or tackled in the past.

“At least I could get those people’s names and see if they’re interested in doing that,” Sutton says.

If  she has to be the ramrod behind a rock movement, Sutton says she will. Except for mowing about 3 acres of grass between her house and the apartments and getting her granddaughter to school several days a week, Sutton says she has the time.

Meanwhile, Sutton is happy with her new turtle and the landscape it’s part of. She hasn’t named the creation yet, but she has put a sealer on the turtle rock to help preserve the colors. 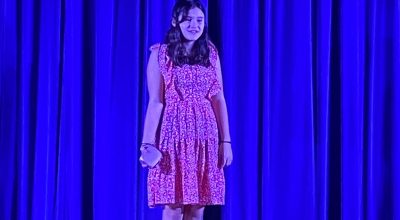