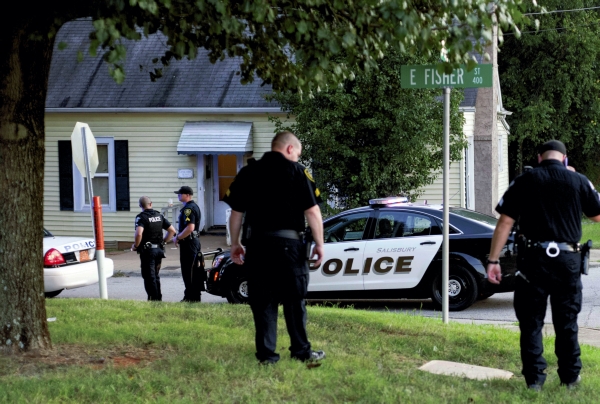 Salisbury Police and Rowan County Sheriff Office was busy on early Tuesday evening with the reports of a gunshot victim on the corner of East Fisher Street and South Long Street. A young male was reportedly taken to a local hospital after a bullet entered the house and struck him. Officers scour the area for shell casings. A short time later a vehical traveling along North Long Street near the Salisbury/East Spencer city limits was struck by gun fire. No injuries were reported in that incident. Jon C. Lakey/Salisbury Post

SALISBURY — Police were called to two incidents of shots fired on Tuesday evening. It is not known at this time whether they were related, but the calls occurred within an hour of each other.

At around 6:30 p.m., police were called to a residence at the 400 block of East Fisher Street for what seemed like a drive-by shooting, according to Sergeant A.L. Bouk. Rounds were fired into the residence, and one person inside was shot. The individual was taken to Novant Health Rowan Medical Center.

A juvenile suspect was taken into custody.

A block over in the parking lot of Marco’s Pizza, Salisbury police officers detained a man and searched a car, but the man was later released. The two incidents may not have been related.

At about 7:30 p.m., police were called to another incident of shots fired, this time into a vehicle.

Chief Jerry Stokes was at the scene at the 1700 block of North Long Street. He said a vehicle was shot at while driving down the road. The vehicle pulled into a residence and continued to be shot at from the road. A bullet hole could be seen in the back window of the vehicle.

Salisbury and East Spencer police were at the scene.

Stokes said the investigation was preliminary and it is not known if the shooting on Long Street was related to the earlier shooting on East Fisher Street.

Murder suspect’s mother: “My son was just trying to…