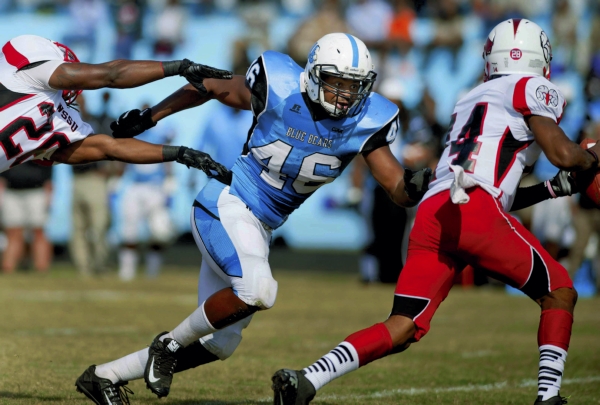 SALISBURY — When Livingstone’s football team hits the field against Benedict on Saturday afternoon, it will feature a good mixture of the old and the new.

Well, actually, maybe a little more of the new.

The Blue Bears take on the Tigers in the Palmetto Capital City Classic in Columbia, S.C., at 5 o’clock. Livingstone opened last season the same way, a 49-6 victory that jump-started the Blue Bears to their first winning season in 17 years.

There were a lot of seniors on the 2015 squad that went 5-4, including four-year starter and All-CIAA performer at quarterback, Drew Powell. Powell, who completed 58 percent of his passes for over 2,100 yards last season, is now playing professionally in Australia but Livingstone head coach Daryl Williams doesn’t live in the past. He beams as he thinks about the challenges of a first game and a new season.

“We actually may have a deeper team this year and definitely a more explosive one on offense,” said Williams. “We have more team speed and we have a stable of running backs and receivers, to the point where it  could be interesting how we will distribute the football. The hidden piece to the puzzle is the quarterback. I’m about 90 percent sure who will start but I’ve got to let the week play out to be sure.”

Williams is deciding between two red-shirt freshman to step into the big shoes of Powell. Both were here last year and played in the spring game: Dallas Bruton, a 6-1, 230-pounder from Lexington, Ky., and Thaddeus Bell, 6-2, 220, from Duluth, Ga.

Bruton shined during the spring game in April but Bell has made up a lot of ground since preseason practice began. But no matter which one starts, Williams expects opposing defenses to bring the pressure.

“I know they’re going to be coming,” said Williams. “With a freshman quarterback back there, I’d do the same thing. But we’re going to move the quarterback around back there and our running backs do a good job at picking up the blitz.

“We’ve got some things in mind to slow defenses down a bit,” continued Williams. “I think our tempo will neutralize some of the blitzing, as we’re going snap the ball and not let you run fresh people on and off the field. If you don’t change personnel, you’ve got to play who you’ve got out there and we want to dictate that with a quicker, no huddle offense than we’ve had before.”

The new quarterback will be trying to get the ball to two new starters at wide out, sophomore Everett Ransom, 6-1, 195 pounds, and Juwan McCall, a 6-2, 180-pound freshman.

Livingstone had two sets of twins last year and this year it has four sets — all very good players.

The Richardsons, juniors from Nashville (N.C.) are returning starters. Jarius was the team’s leading rusher at running back last season with 613 yards (QB Powell had 788) and Jarod starts at inside linebacker.

The Williams twins, seniors from Jacksonville, Fla., were starting cornerbacks on the 2015 defense. Kovarius still mans one of those spots but his brother, Kevin, is dealing with eligibility and knee issues. Coach Williams does expect Kevin to return at some point this season.

The two new sets of twins are exciting to Coach Williams.

The Andersons, from Niagara Falls, N.Y., are penciled in as starters on the defensive line. Jabrel is a 6-2, 300-pound down lineman while his twin, Jamar, is a 6-2, 265-pound defensive end.

Finally, the Faraimo twins, true freshmen from Spring Lake, are sure to become fan favorites, strictly from their speed alone. Both were burners at Overhills High School in eastern North Carolina. Both are 5-10, 195 pounds — Anthony, a wide receiver, and Andrew an elusive tailback. Their Hudl recruiting videos are full of the brothers flying through defenses, on the way to touchdowns.

“The Faraimo twins can play,” said Williams. “They add a new dimension to our speed that we didn’t have last year and that makes us a little more exciting. They’re extremely fast and they’ll see a lot of action as kick returners as well.”

The defense looks solid, anchored by sophomore defensive end Armond Cox,  a 6-3 240-pounder who made a big impact last year as a freshman with 14.5 tackles for loss. He was selected to the All-CIAA Rookie team.

DeAngelo Dickinson, a 275-pound senior, rounds out the defensive line, along with Cox and the Anderson twins.

Senior Danny Robinson, 5-9, 195 pounds, but a vocal leader from his safety position is also a returning starter. Demasio Williams, no relation to the twins, has nailed down the other safety spot and Gregory Hines, a junior, is on the corner opposite Kovarius Williams.

“I’m excited about the defense at this point,” said Coach Williams. “The Anderson twins make us deeper on the line and we’re better at linebacker. I think we’re solid on defense.”

All-CIAA punter Leo Manzo has graduated and is a volunteer coach now, working with freshman Tyler Keene. Keene, 6-2, 170, from Seattle, will handle both the punting and kicking duties for Livingstone this season.

As far as this week’s opener against Benedict, Williams is expecting a battle.

“Benedict will be year stronger, bigger and better,” he said. “They will be more physical than they were last year and I think they’ll bring more intensity. I expect them to be big and try to run it on us.”

Notes: Williams smiled when asked if former Salisbury High star and Rowan County Offensive Player of the Year, Justin Ruffin, is a new weapon at running back. “Justin did extremely well in the scrimmage last week,” said Williams. “We’re expecting him to be our short-yardage back, to close some games out in our four-minute offense. I’m real excited about getting hm the ball late in games when we need some tough, hard yards. He’s a good, tough football player.” Ruffin went to Appalachian State out of high school but did not see action there. … Powell, reported on Sunday to the Sydney Express of the National Gridiron League in Australia. The NGL season begins in October. … Powell’s favorite target, at least during the past two seasons, Jalen Hendricks, is a student coach this fall with the Blue Bears while he finishes up his degree. Hendricks was the 2014 CIAA Offensive Player of the Year as Livingstone’s top receiver, and had a solid senior season last year as well, catching 69 passes, nine for TDs.