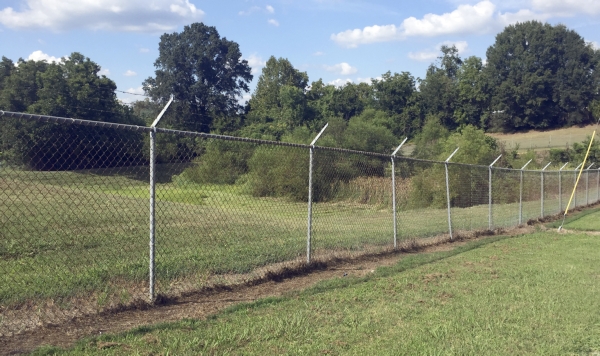 Councilman Kenny Hardin said neighbors have been complaining about a field at the end of West Bank Street attracting wild animals, which then damaged property and ate through gardens. Amanda Raymond/Salisbury Post

SALISBURY — Councilman Kenny Hardin has been fighting to get the city to take care of the rodent problems stemming from a field at the end of West Bank Street in the West End for more than two years.

The city-maintained lot was mowed Tuesday morning, but Hardin said at one point the greenery came up over the surrounding fence.

Hardin decided to get the county involved to help get rid of rodents and other animals that were eating away at property and local gardens in the West End area.

Hardin said that neighbors had been complaining at Salisbury Neighborhood Action Group meetings for more than two years that the lot was not being maintained by the city.

There were reports of rats, snakes, groundhogs and raccoons seen around the area, chewing through gardens and burrowing in yards.

“Nobody should have to live like that,” he said.

Although Hardin said he wanted to help the neighbors, his parents also live in a house adjacent to the lot. Before sitting on the City Council, Hardin sent three letters to the city on behalf of his parents to try to get the city to do something about the lot.

“My dad used to have to sit out with a pellet gun just to enjoy their patio,” he said.

Since the city was not responding, Hardin contacted Rowan County Commissioner Craig Pierce for help. After going out to survey the area, Pierce contacted Clay Martin, animal services manager.

Traps were set for the animals the next day.

To date, Hardin said, six raccoons and two groundhogs have been caught, with one of the animals estimated to be about 40 pounds. The traps were set about two weeks ago.

Hardin said the biggest concern was the safety of the neighborhood children.

Complaints came in from neighbors on Lloyd Street, Craig Street and over by the former J.C. Price High School.

According to a statement from the city obtained by WSOC, the lot was created to “reduce the flow of water traveling under West Innes Street by holding large volumes of rainwater and slowly letting it out over time.”

The statement also said that vehicles are not able to “fully access the area to clear the vegetation and wildlife.”

The Public Services Department is researching the cost of the large machinery that would access the area and is also looking into rehabilitating the area. The funds for a rehabilitation project are expected to be in the 2017-2018 budget, according to the statement.

Hardin said he understands that staff is limited, but the lot needed to be put on a schedule to be consistently maintained.

“This needs to be a priority,” he said.

Hardin said neighbors have been pleased that something is being done to get the animals away from their homes. He said he just hopes the work continues.

“I hope (the city will) do their due diligence,” he said.