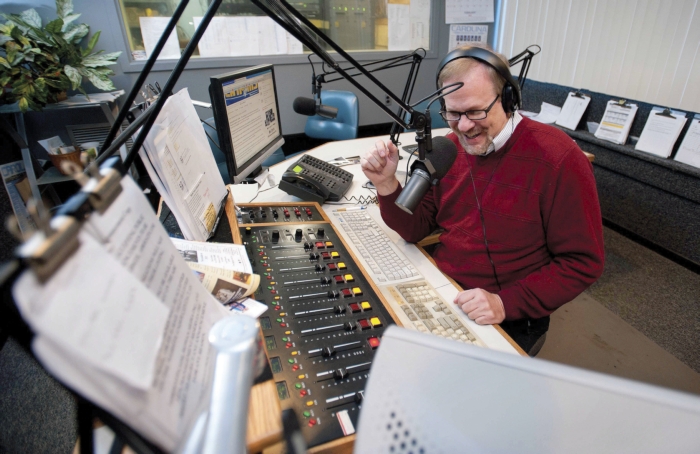 Kent Bernhardt laughs during on air conversation with a caller at WSTP in February 2015.

It feels like a death in the family. I know it’s not, but it feels a little like it.

Once-successful businesses close every day in this country. We should be used to that by now. But the news that WSTP, Salisbury’s oldest radio station, was going dark hit home especially hard.

It should. I poured a lot of years into that magical place, as did many local broadcasters who went on to other ventures.

In its heyday, WSTP was a tiny David of a station that left a Goliath size impression on the local community. Salisbury could depend on good ol’ 1490 for everything local, from election returns to those ever-popular Rowan County Legion baseball games.

The station’s signal was nothing to brag about even then. We often made jokes about it ourselves.

“We closed the windows last night and lost half our audience,” a fellow announcer once quipped.

The station seemed to thrive anyway. It may not have had huge signal strength, but it had staying power.

I started work there in the summer of 1977 as WSTP’s morning news anchor. I was one of 30 full-time employees in those days, a number that would shrink drastically through the years as the broadcast industry would undergo vast changes.

Still, WSTP soldiered on. The glowing red lights on the Statesville Boulevard tower shone brightly through some challenging years.

I’ll most remember the people I encountered through the years. Some, like me, hung around quite some time. Others made a brief appearance but had a huge impact.

I’ll also remember Tom Harrell and Mary Ann Lanningham at the helm, gracing us with their patience and the freedom to create as we sharpened our skills in front of the microphone. Those of us who remained in the business are better broadcasters because of them.

One of my fondest memories came later, in the early part of 1996. Salisbury had been hit by a paralyzing winter storm in the wee hours of a Saturday morning. The station was largely automated on weekends at that time, but a few of us ventured in to stage an impromptu Saturday show and keep the public informed.

It turned out to be one of our most memorable broadcasts.

With power out throughout much of the county, we sensed many residents had the station tuned in on battery-operated radios that were weakening by the minute. We opened our phone lines so people could call in and talk about whatever troubles they may be experiencing, and to let us know their needs.

For nearly four hours, we fielded a steady stream of calls. Many were from senior citizens who were frightened and felt cut off from their community. They called to hear voices of comfort and assurance. Neighbors reached out to help neighbors, all because they heard it on the radio.

It was one of my proudest moments as a broadcaster. And it all happened on a tiny little AM station with a terrible signal.

WSTP may fade away, but the impact it had on the community it served will live on.