I miss the Bush family 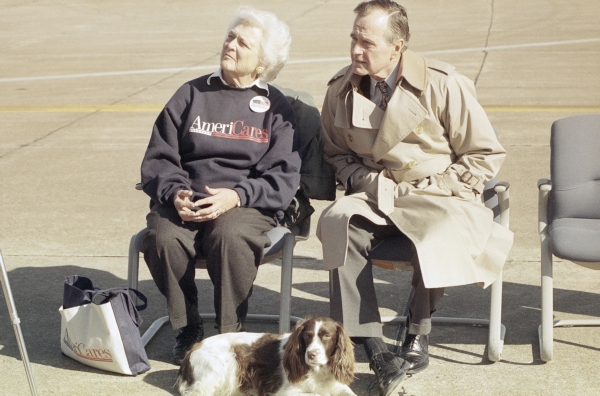 Friday started as it usually does: an early wake-up call, an interview with the next president of the United States and a hateful personal attack from Donald Trump. Such is life during the dog days of August in a nasty presidential campaign not even near its ugly end.

These days, a rudely out-of-bounds Trump attack surprises my co-host, Mika Brzezinski, and me about as much as a puppy relieving himself on a living room rug. It does no good to lose your cool with the puppy or Trump, because neither has control over his bladder or mouth.

Fortunately, things became a bit more interesting by the time we rolled into Kennebunkport, Maine, for a speech and made our way to Walker’s Point to visit President George H.W. Bush and his wife, Barbara. Bush biographer Jon Meacham was already inside their home.

George and Barbara Bush were the same gracious and welcoming hosts Friday night that they had been when my family last visited Kennebunkport five years earlier. Mrs. Bush even asked about my youngest children, whom she remembered remarkably well considering the countless guests that have streamed through their world since that summer’s day in 2011.

Her human touch is the kind of thing her family always seems to manage with ease. They make others around them feel special despite the fact that they have lived the most remarkable of lives, serving in Congress, running the Republican National Committee, heading up the CIA, being the U.N. ambassador as well as the U.S. ambassador to China, serving as Ronald Reagan’s vice president and then leading America as the 41st president.

But good luck getting George or Barbara Bush to talk about themselves. They just don’t do it and they never will. First of all, their parents didn’t allow it. And besides, that kind of thing wasn’t done in the world from which they came. It is just one small way that the ethos of Walker’s Point is so radically different from the mindset that infects Trump’s corner office in Trump Tower.

As Meacham and I walked down the driveway after saying goodbye to the Bushes, Jon lamented the fact that the same Republican Party that nominated a man like Bush, who rarely spoke about himself, would a quarter-century later select a reality-TV showman who obsessively talked about little else.

Meacham paraphrased Henry Adams in saying that the historical devolvement from Bush to Trump proves that Darwin’s theory of evolution was less compelling when applied to American politics.

We soon drove away from Walker’s Point and into the night knowing that the world we had just departed would soon be fading as fast as the dying sunset over that rocky Maine coast.

Joe Scarborough is the co-host of “Morning Joe” on MSNBC. He wrote this for the Miami Herald.