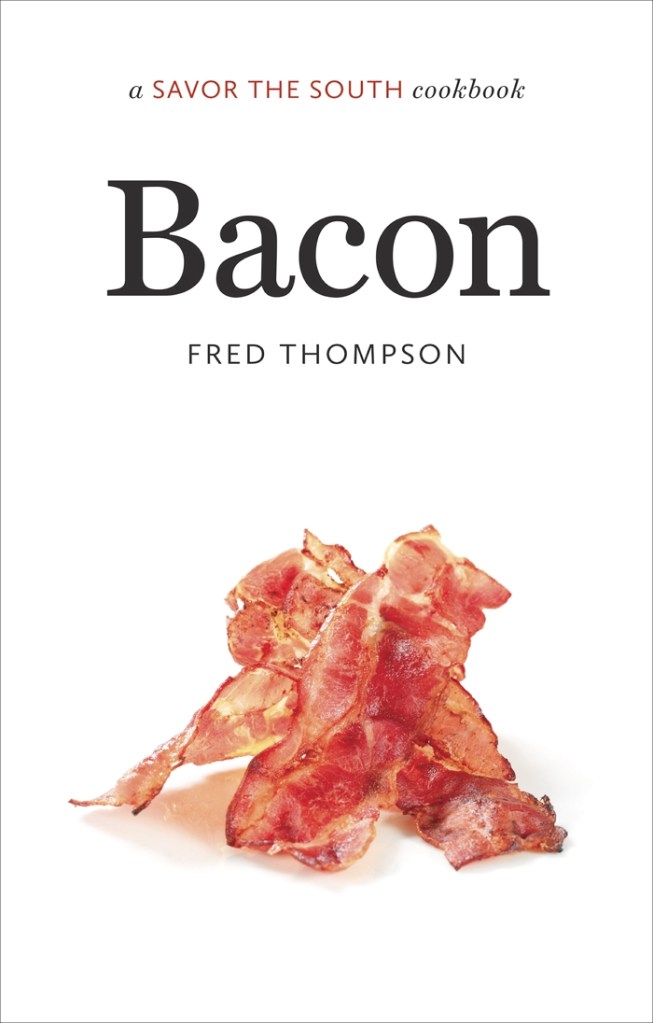 “Bacon: It seasons our life,” says Fred Thompson in his new cookbook, “Bacon,” part of the Savor the South cookbook series published by the University of North Carolina Press.

He goes on to call it “meat Candy” and says it hits the salt, sweet, texture and umami parts of our palates, which is why even some vegetarians succumb to bacon’s allure.

In America, what we call bacon comes from the pig’s belly. Thompson writes that the rest of the world calls this “streaky bacon” or American-style bacon.

People from elsewhere prefer leaner, meatier bacon from the side of the animal, near the loin. This is what we call Canadian bacon, or Irish bacon. Where we smoke our bacon, Italy, for example, simply cures its pancetta, without smoke.

Latino stores carry cheek or jowl bacon, which is traditional. In other parts of the world, something like bacon can be made from beef, goat, lamb and turkey.

In the South, bacon was part of the three M’s, according to Marcie Cohen Ferris in The Edible South.” Meal (flour and cornmeal), meat and molasses. It’s the food enslaved African-Americans had, and, a food mountain southerners relied on, as well as small farmers.

Then, when Southern food became popular, bacon was raised to new heights.

Pigs came to Florida in the 1530s with Spanish explorer Hernando de Soto. The English brought domesticated pigs in the 1600s.

Thompson has hogs in his blood — his grandfather raised hogs, as did most of his ancestors, making the transition from farm to jobs outside the home. Bacon was still a cheap meat source, and fed many a mill worker who, Thompson writes, had a hog lot in the mill villages where they could raise pigs for their own use, as they had done on the farms.

Now, with the interest in farm-to-fork eating, we are returning to the old way of doing things, the heritage pigs and the old-fashioned curing and smoking methods, Thompson says.

He shares bacon’s      lore in country songs and movies, and in “To Kill a Mockingbird” — “bacon frying, crisp as twilight air.”

Then he goes into the different categories of bacon, from cured but not smoked, to cured and smoked, from the different parts of the hog, why salt pork is different (cured, unsmoked, sometimes called white bacon).

He gives tips on buying bacon, storing bacon and cooking bacon. And he rhapsodizes a bit about bacon fat and its many wonders.

Thompson even provides a recipe for making your own bacon — as in curing and smoking yourself. The recipes run the gamut from breakfast to dessert, and even include one for bacon-infused bourbon.

You should probably have a pan of bacon cooking on the stove while you read this book — and keep a hanky handy for the drool — ‘cause you’re going to be very hungry.

Thompson is editor of Edible Piedmont magazine, and author of “Fred Thompson’s Southern Sides: 250 Dishes That Really Make the Plate,” among other books.

Salted caramel and bacon, two of the trendiest foods of the moment, paired with everybody’s favorite, an ooey-gooey brownie. You’ll get the vapors!!

Preheat the oven to 325 degrees. Line an 8- or 9-inch square baking pan with foil. Coat the foil with butter.

To make the caramel filling, heat the sugar in a medium saucepan with a heavy bottom, stirring constantly. The sugar will lump and then melt to a deep golden brown. Watch carefully—sugar burns easily. Add the bacon drippings and the butter, if using, and stir vigorously. Remove from the heat and drizzle in the cream carefully (it will steam and bubble), beating rapidly to mix. When the mixture is smooth and the bubbling has calmed, set it aside to cool for at least 15 minutes.

To make the brownies, combine the sugar, cocoa powder, and salt in a mixing bowl. Melt the butter, pour it over the mixture, and stir until well blended. Add the vanilla and eggs, and stir. Then stir in the flour just until blended; the batter will be very thick.

Bake for 30–35 minutes or until a toothpick inserted is almost clean when removed. Remove from oven. Drizzle the reserved caramel over the brownies. Place the pig candy gently on top of the brownies and return the pan to the oven for 3–5 minutes to set.

Cool in the pan for 10 minutes. Lift the foil from the pan and place on a cooling rack to cool completely. Cut into small squares.

16 slices (about 1 pound) bacon, the best quality you can find

1 1/2 teaspoons crushed red pepper, or more if you like

1/3 cup firmly packed light brown sugar, or more if you like

Preheat the oven to 350 degrees. Line two 10 × 15-inch rimmed baking sheets with parchment paper and place a wire rack on top of each sheet (if you skip this step, you will be cleaning the pans into the next decade). Arrange the bacon in a single layer on the two racks. Sprinkle evenly with the pepper and brown sugar.

Bake until the bacon is crisp and browned, rotating the sheet pans in the oven halfway through the process. Some people turn the bacon, but I don’t; it’s too much trouble for too little result. Move it from the racks onto a plate and pat lightly with a paper towel to remove any remaining grease. Serve hot or at room temperature. You can make this several hours in advance, and keep at room temperature. I have never tried making it a day ahead.

This is probably the ultimate in bacon cookery. It’s a wonderful savory spread for almost anything and a welcome holiday appetizer. Bacon Jam goes much further than just what the word implies. When spread over pizza dough, it elevates pizza to another level. One of the best uses for Bacon Jam—that is, if you can part with it—is to fill 4-ounce canning jars with the stuff and give as gifts. It’s so versatile that you’ll never run out of uses for it. The beauty of this recipe is that thanks to slow cooker you’re not stuck stirring and stirring and stirring until the jam is thickened.

4 garlic cloves, peeled and smashed with the back of a knife

Put the bacon slices in a large (at least 12-inch) skillet or sauté pan. Place the pan over medium heat and cook until the fat is rendered and the bacon is lightly browned, about 25–30 minutes. Stir the bacon occasionally.

Remove the bacon from the pan using a slotted spoon and place it in the slow cooker’s container. Drain off all but about 2 tablespoons of the bacon fat from the pan. Place the pan back over the heat and add the onions. Cook the onions until they are lazy and translucent, about 6 minutes. Add the garlic and continue cooking for another minute or 2, until it is fragrant. Add the vinegar, brown sugar, syrup, and coffee. Increase the heat to high and bring the mixture to a boil, scraping any brown bits from the skillet. This process should take about 2 minutes. Pour the liquid into the slow cooker.

Set the slow cooker for high and cook uncovered until the liquid is syrupy, usually about 3 1/2–4 hours. Transfer this mixture to a food processor and pulse until coarsely chopped. Remove to an airtight container and let cool. Refrigerate for up to 4 weeks.

In the Spotlight: Local dance school hosting auditions for…