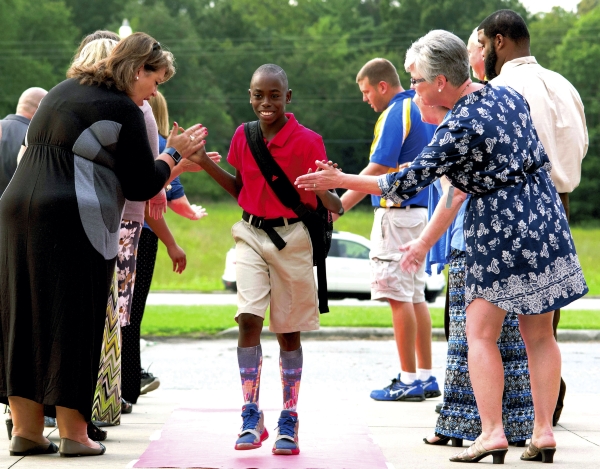 SALISBURY — Monday morning the first bus pulled up to Knox Middle School just as the sun cleared the horizon. With the vehicle parked and the doors open, the driver gave her students a short pep talk, encouraging them to have a good start to the school year.

“Make it happen,” she told them.

As the students filed off the bus, they stepped onto Knox’s red carpet, and were met with cheers and high-fives from teachers and administrators. Principal Mike Waiksnis said it’s a tradition the school started three years ago.

“We’re excited to see them after the summer,” he said. “We try really hard to build positive relationships with our students, and this is one of the ways we do that.”

Students smothered back a yawn as they stepped off the bus, or smiled as they greeted teachers for the first time. If they were nervous, it didn’t show. But Superintendent Dr. Lynn Moody said she still feels the excitement and anticipation of the first day of school.

At Isenberg Elementary, Amy Keane waited out front with daughters Trinity and Sydney. Trinity started second grade Monday, but it was her first day at Isenberg. Keane said the family had just moved from Lakeland, Fla. two weeks before.

The three arrived early, peering in the doors at 7:30 a.m., and had to wait outside until the school opened. Trinity is starting from scratch with a new school and new teachers — she’ll even be riding a bus for the first time. Keane said that she wasn’t able to collect a lot of information with the move, and came to school with Trinity to get things sorted.

When asked if she was nervous, Trinity said she was, “a little.”

While they waited, Keane snapped a photo of the two girls in front of the school, and fixed Trinity’s Hello Kitty backpack. Sydney wasn’t starting school, but she carried a backpack to match her older sister.

When the doors opened, Principal Marvin Moore directed the group to the cafeteria for breakfast.

Moore greeted nearly every student by name. Moore said he’s looking forward to a good year — the school has two teachers from Jamaica, chosen from the Visiting International Faculty program, and Moore said the school was able to retain a lot of teachers. And Isenberg fourth- and fifth-grade science and social studies teacher Anthony Johnson was recently named the Rowan-Salisbury 2016 Teacher of the Year.

“We appreciate what we have here,” Moore said.

Inside the cafeteria, Trinity grabbed breakfast — a chicken biscuit. Keane said she could have eaten at home, but Trinity told her she wanted to eat at school. Trinity will be starting the school year in Lyndsay Tomlinson’s class. While waiting, a fellow student gave Keane directions to the second-grade hall.

When the bell rang at 8 a.m., students began moving towards their classrooms. Keane pointed out the school’s media center to her daughters as they walked by.

In the classroom, Trinity took her seat and finished her breakfast — it was Keane who was all nerves.

“This is like pre-k all over again,” she confessed to Tomlinson.

With a last hug, Keane left Trinity to her class, and headed to the office to figure out her bus number and schedule. She and Sydney planned to spend the rest of the day exploring downtown Salisbury, before going back to meet Trinity at the bus stop in the afternoon.

Across the district, students returned to the system’s 35 schools for a brand new school year. Moody said that the 2016-17 school year will be a year of “digging deeper” and moving forward.

“I think you’re going to see some big differences,” she said. “ … This is our year.”