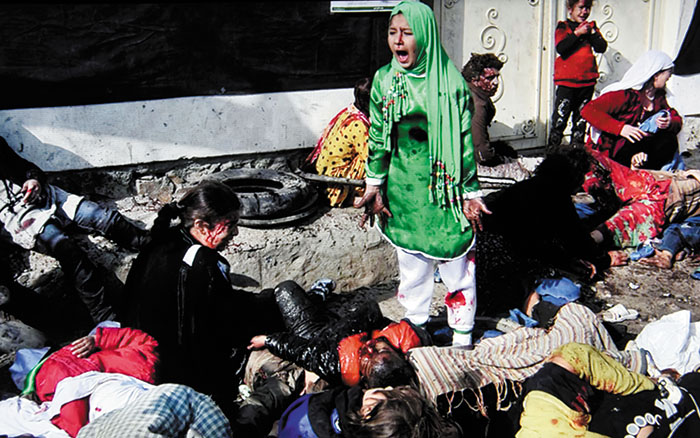 Pulitzer Prize in News photography was awarded to Photojournalist Massed Hoggaini for this photo. photo from the documentary film "Frame By Frame."

During the rule of the Taliban in Afghanistan from 1996 until 2001, photography of all kinds was ruled to be illegal. No wedding photos. No photos of children growing up. The Taliban destroyed any family photos and photo albums it could get.

The war lords who ruled the country didn’t what their story to be recorded or told. The culture of the country always offered the threat of violence by the fundamentalists who agreed with the Taliban law. It was a culture that didn’t allow women to talk in public or be seen without their heads and sometimes faces covered. Women were not even second-class citizens. They had no class standing in the culture.

Facing great danger, four brave photojournalists worked behind the scenes and many times secretly to photographically record the everyday life of citizens. Massoud Hoggaini covered news events and the war. His wife, Farzana Wahidy, covered the lives and daily work of the women and their children. Wakil Kohsar covered social issues such as free elections and the growing drug addiction problem. Najibullah Musafer, a documentary photographer, taught photography classes and the ideal of the free press.

These photojournalists and their work in Afghanistan is the subject of the documentary movie, “Frame By Frame,” shown recently at the Catawba College Community Forum. The language translator for the film and film ambassador Baktash Ahadi accompanied the viewing to answer questions about the movie and Afghanistan.

In the remainder of this report,  the photojournalists will be referred to by their first names since that is the format followed in the movie.

These photojournalists had never done photojournalism before and now their work has been published around the world. Farzana  points out in the movie, “We  were the first group who got trained in photography after the  Taliban time.”

Wakil was reluctant to be in the movie at first.  He states in the film, “At first, I wasn’t sure I wanted to be part of the movie. At the time, I was trying to keep a low profile, mainly for security reasons so that I could continue to do my work with as few hurdles as possible. But when I saw that they were going ahead with it, and with three men, I felt it was my duty to be in it.”  He adds, “ This is something we cannot ignore. This is reality.”

Wakil continues, “I photograph the good and the bad of society. There is at least one person in every family that is drug addicted.”

In 2014 the international media and military troops began pulling out of Afghanistan, leading Massoud to worry that the Taliban will return in some fashion and question what will happen to the free press.

Massoud, a Pulitzer Prize winner for one of his photos,  now works for the AP in Kabul. He  said that he had to tell the story.

“Journalism and this free situation for the media is really new in Afghanistan. We didn’t have this before. This 10 years has been a revolution in photography. This is a big possibility that the world will forget us again. This is the main time for us photographers to stand up.”

Najibullah says in “Frame By Frame,” “The same way that you and I would defend our country’s security by weapons, the weapons of a photojournalist is their camera. Photography is an international language.”

Farzana emphasizes that she doesn’t want to the country to forget what they suffered through. She said, “ It is time for all journalists to not forget whatever happened in Afghanistan,  to never let it happen again.  I will always stand up for what I believe.”

Farzana said that in her photography  she tries to focus deeper on the life of Afghanistan and its women. She wonders, “Sometimes, I get to the point that I even question, if I die is it worth it? I want to use photography in a way to not be worthless again.”

All of Farzana’s childhood photos were ripped up by the Taliban. “So much happened in my life during the Taliban. My education was taken away as it was for a lot of women,” Farzan tearfully adds.

“The world now is like one body and all the world should feel our pain,” said Massoudi.

There are a number of stories to be told in this documentary movie and the making of the film.  Two young female filmmakers, with a TV background, produced the film in Afghanistan. Make no doubt that two women going into the country to film a movie was not an idea taken lightly. Alexandria Bombach and Mo Scapelli went to Kabul in 2012 to research the idea. They returned to the United States  to raise the funds for the movie.  Scapelli sold her car to help the cause, and they raised $75,000.

While filming, the filmmakers hoped they were saying important things in the movie. They did not speak the language, so they often shot video of conversations not knowing what was being said. It was only when they returned to the U.S. and got with translators that they realized  what they had recorded.  They filmed 300 hours of video, much of which was cut from the movie because it was about trivial things unimportant to the film. They said they saved the “golden bites” in the film.

They believed the movie was so important because they feel that “photos are so much a part of our daily lives” it was tragic to have the entire photo coverage of a decade of Afghanistan be destroyed.  The film does not just tell a story, but it deals with the human lives of the four photojournalists and the people and culture of Afghanistan that need to be recorded.

The movie follows the four photojournalists in their work but not what the U.S. military was doing.  They are quoted as saying, “We didn’t want to dive into the story of the U.S. forces.”

All of the photojournalists could speak English, but in the film only the female, Wahidy, spoke in English.   They wanted to use their native language so there would be no mistake about what they wanted to say. They wanted to tell their own story themselves and not have the filmmakers tell it for them.

If the filmmakers had not been female themselves, they could not have had access to the Afghan women to film the movie with Wahidy.

In one interview, filmmaker Mo Scarpelli was quoted as saying, “I hope that an audience gets to see what it means to be a storyteller, to be seeking truth when people are putting up barriers in front of you, to uphold your responsibility to your craft no matter what’s thrown your way and to seek beauty and justice through photography.”

The message  in the movie is so important now in this digital age, with so many digital images being thrown at the world that have no real purpose, so that viewers can see what serious, good photojournalism can mean.

In “Frame By Frame” there are some lighthearted scenes as you would expect in daily living such as the opening scene of paddle boats in a lake at an amusement park.  There is a scene of a pop concert with people having a good time. There are photos of a female boxer training. The photojournalists were able to capture some of the beauty of Afghanistan and its people. Viewers are likely to come away with a completely  different feeling than what we get from all  the war-torn images of  suffering, destruction,  and despair. The images do contain strong emotional content.