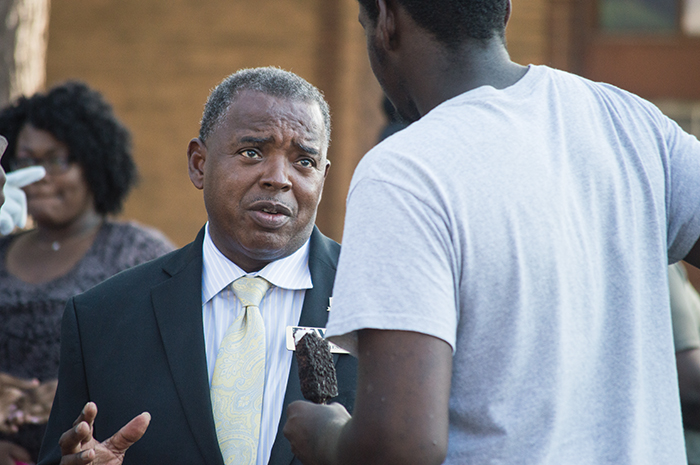 In June’s special primary, Davis won the Democratic Party’s nomination for the 13th Congressional District. On the Republican side, Davie County resident and business owner Ted Budd won the nomination by a much larger margin than Davis.

Generally, the recently redrawn 13th Congressional District appears to favor Republicans. Voter registration numbers tilt toward Democrats, but Republicans who are registered to vote in the 13th District turn out to vote more frequently.

The 13th District’s overall voting trends are similar to Salisbury and the West End community, where Democrats make up a large chunk of the number of registered voters but often don’t vote.

Davis said he’s OK with the common assessment that voting trends make Budd the favorite to win in the 13th District.

“I see myself as someone who wants to be the favorite, would not have a problem with being called the underdog, but on Nov. 8 I want to be called the representative for the 13th Congressional District,” he said. “So, regardless of what I’m seen as today, we’re going to focus on winning this election.”

Davis visited Livingstone College last week in an effort to appeal to students. Instead of giving a speech, he spoke individually to students on campus. In an interview with the Salisbury Post, Davis said he’ll need the support of Salisbury voters registered as Democrats to win.

“This is a critical area in the district,” he said. “We’re going to need their support, the support of the students here at Livingstone College. This area and this entire county can do much better than it has in the past.”

Davis admits that turning out local Democrats who don’t vote will be difficult. A candidate who speaks to voters’ interests and concerns, however, can turn out those who traditionally don’t participate, he said.

Even with the marches, however, Livingstone students like Ashunti Sims say they don’t frequently pay attention to politics and don’t get excited about voting. Every student questioned by the Salisbury Post said they were unaware Davis was on campus on Friday.

“If they’re going to help us out, then I can get interested in voting,” Sims said. “Other than that, I don’t really care about politics.”

In addition to Livingstone students and the West End community, Davis also sees potential to gain votes from Republicans who won’t vote for Trump.

“I think, with (Trump) pushing Republicans and conservatives further to the right than the Tea Party, I think there’s going to be some damage there,” he said. “I think we’re going to see some results flowing to the moderates, to the Democrats, to those who speak for a majority of the people.”

There are just over two months until the general election, which will include some of North Carolina and Rowan County’s most important political races. Many races, including the 13th Congressional District, haven’t drawn significant attention.

As the 13th Congressional District race heats up, however, Davis sees himself as a better, more qualified candidate than his Republican opponent. He served in the Marine Corps for 20 years and multiple terms as a Guilford County commissioner.

“If you want to compare my resume to Ted Budd, what we’re talking about is no experience at all,” he said. “That experience, working across the aisle as a county commissioner; that experience being a businessman; and that experience, 20 years in the military gives me a pretty good resume and prepares me to go to Washington to represent the 13th District.”

For his part, Budd contends that politicians are the ones that have negatively affected America. He takes pride in his outsider status.

“I truly believe that if we want to fix the problems in Washington, D.C., we need people whose first priority isn’t getting re-elected,” Budd said. “I’m a true conservative outsider that’s never run for office before. We need business and work experience in Congress, not more professional politicians.”

Gene Miller says he would bring experience to school…