Tony Romo out with another back injury, no word on return 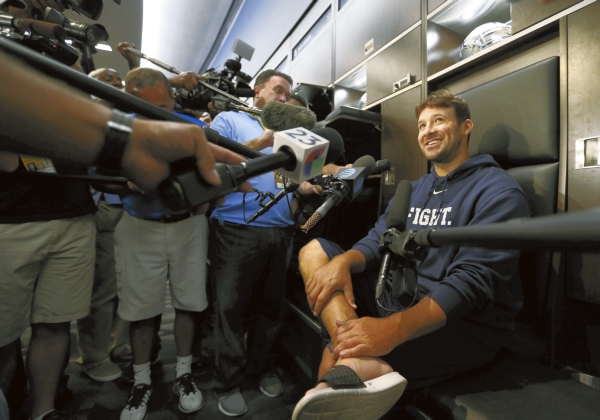 Dallas Cowboys quarterback Tony Romo talks about the new facility with the media at the Dallas Cowboys new headquarters at The Star in Frisco, Texas. The Cowboys had their first workday Sunday at their new practice facility _ part-headquarters, part-spa, part-museum with amenities the players probably couldn’t have imagined at aging Valley Ranch. (Vernon Bryant/The Dallas Morning News via AP)

FRISCO, Texas (AP) — Tony Romo is out with yet another back injury and it’s unknown when he will return, although Dallas coach Jason Garrett says he expects his star quarterback to play this season.

Garrett said Saturday that Romo sustained a broken bone in his back when he was hit from behind by Seattle’s Cliff Avrill and slid awkwardly on the third play of a preseason game.

Romo tried to get back into Thursday’s game and said afterward that he was OK. But Garrett said the 36-year-old woke up Friday with stiffness, and an MRI revealed Romo’s fourth back injury in less than four years. The injury will not require surgery.

Garrett wouldn’t rule out Romo for the regular-season opener Sept. 11 against the New York Giants. Rookie Dak Prescott, a fourth-round pick who has had a strong preseason, is the presumed starter, although Garrett wouldn’t acknowledge that either.

“If you guys remember, he has played with fractures in his back before,” Garrett said, referring to Romo’s quick return from a small fracture in his back in 2014.

“So that probably more than anything else is what is not giving us a timetable. We’ve heard a wide range of possibilities in terms of when he would be able to play.”

Romo had back surgery twice in 2013, the first time during the offseason and again in December after rupturing a disk in Week 16 against Washington and missing the finale that the Cowboys lost with a playoff berth on the line.

In 2014, the four-time Pro Bowl player sustained a small fracture in his back and missed a loss to Arizona before leading the Cowboys to the NFC East title and their first playoff win since 2009.

“It’s not related to the other back issues that he’s had,” Garrett said. “There is a specific to the hit he took the other night in the game.”

Center Travis Frederick said the team was surprised by the news on Romo when they reported to the team’s new practice facility Saturday.

“Still trying to take it in a little bit,” Frederick said. “The name of the game for us has always been focusing on taking things one day at a time and also have the ‘next man in’ mentality. Being able to have Dak step up and be able to take over that role and just support him in any way that we can.”

Prescott was elevated to the backup job when incumbent Kellen Moore broke his right ankle in a training camp practice.

The Cowboys are likely to add a veteran if Romo misses extended time, but now it figures to be as a backup to Prescott rather than the next in line behind Romo since Dallas elected not to bring in help soon after Moore’s injury.

BALTIMORE (AP) — The night was supposed to be about the long-awaited returns of quarterback Joe Flacco and linebacker Terrell Suggs.

Instead, Baltimore Ravens coach John Harbaugh ended up lamenting two significant injuries and a preseason schedule filled with games that are “not meaningful.”

Flacco went 11 for 16 for 94 yards in his first action since November, but the Ravens apparently lost tight end Benjamin Watson for the season during a 30-9 preseason victory over the Detroit Lions on Saturday night.

Both teams’ first-string offenses did very little in the last regular-season tuneup for most starters, but Fitzpatrick connected with Decker for a 22-yard score three plays after Darrelle Revis intercepted Manning in Giants territory in the second quarter.

Fitzpatrick finished 9 of 16 for 76 yards with the score and lost a fumble before being replaced by Geno Smith just before halftime.

Manning was 10 of 15 for 65 yards and an interception while playing one series into the third quarter.

CHICAGO (AP) — Alex Smith looked sharp in leading three scoring drives in the first half and the Kansas City Chiefs got a 23-7 preseason victory over the Chicago Bears on Saturday.

Smith completed 20 of 30 passes for 181 yards before Nick Foles came in to start the third quarter. The defense strangled Chicago’s offense, and the Chiefs (1-2) came away with the win after dropping their first two exhibitions.

Kansas City has one more tuneup against Green Bay before opening against San Diego on Sept. 11. But in what is generally the final dress rehearsal for the starters, the Chiefs dominated.

“I certainly feel like we’re ready as far as game speed, as far as getting the trials, getting enough plays,” Smith said.

“I felt like we got in a lot of different situations — the goal line, short yardage, red zone, got a little two-minute today. That’s kind of what you want, I feel like, in the preseason.”

Kansas City got two second-quarter field goals from Cairo Santos and a 1-yard touchdown run by Spencer Ware in the closing seconds of the half to take a 13-0 lead. But the score didn’t reflect just how lopsided the game was.

Kansas City had 177 yards passing compared to minus-7 for the Bears through the first two quarters.