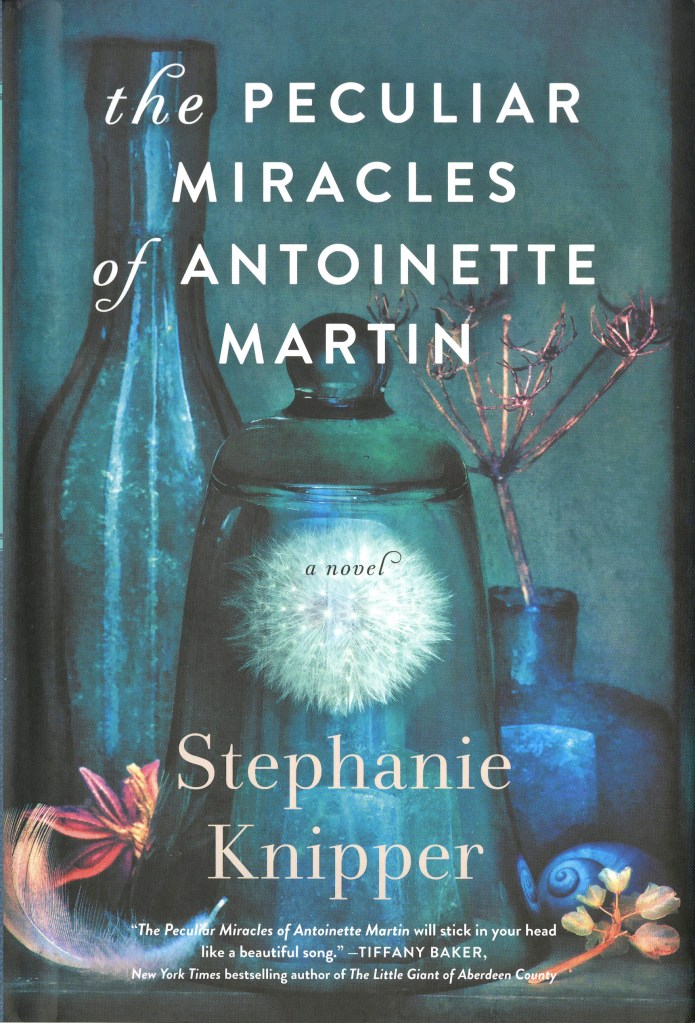 Stephanie Knipper, author of “The Peculiar Miracles of Antoinette Martin,” has a child with special needs.

Instead of lamenting her fate, Knipper realized, as she wrote in an essay for Algonquin Books of Chapel Hill, “That the only thing different about Grace was the way she looked on the outside. She wanted the same things I did. To be loved. To belong. To laugh.”

With this insight, she wrote a novel about a child like her own — who cannot speak, has seizures and difficulty moving — and made her miraculous.

She added ordinary people who struggle to do extraordinary things — like loving each other.

The novel is full of wonder, told gently and with great respect.

Antoinette is the special child. Her mother, Rose, suffers from a damaged heart. Rose’s sister, Lily, finds solace in numbers — she is an insurance actuary, where everything adds up neatly.

Rose’s neighbor, Seth, went to seminary, searching for meaning after a childhood with an alcoholic father. He loves and cares for Antoinette as if she were his own. Seth was also Lily’s first love, the sisters and neighbor boy growing up like one family.

So much has changed. Rose and Lily’s parents, who owned a commercial flower farm, are killed in an accident on the way to a flower show.

Rose and Antoinette are alone. Lily signs her part of the farm to Rose, Seth buys it, and the three make a living. Rose includes Antoinette in everything she does, determined to have her daughter accepted.

But the sisters aren’t speaking. Rose expected Lily to stay and help after their parents’ death. The thought of caring for Antoinette terrifies Lily, who flees to a city and a job with concrete expectations.

Seth found no answers about his abusive alcoholic father, also an accomplished violinist who taught his son to play. When Seth left for school, he also left Lily.

Lily’s neighbor, Will, is an emergency room doctor who has been treated for lung cancer. Lily thinks of him as her best friend and he supports her, as a friend, just to be in her company. He grounds her, but he’s obviously in love.

When Rose realizes she is dying, she has to ask Lily to come home. Someone has to care for Antoinette. Lily feels she can’t cope with the child, but her heart breaks for Rose, so she returns.

And there’s Seth, helping run the farm, helping Antoinette, who clearly adores him. Hurt feelings plague them all like bee stings.

At the heart of it is Antoinette, who at first hates Lily. She growls at her, scratches her, bites her. She’s still small, weak, but Rose and Seth can read her movements and gestures easily. Lily is lost. She’s about to leave when Will shows up to convince her she has the strength to care for Antoinette when Rose is gone.

Rose writes in her journal: “Life is not a straight line. It’s a spiderweb that twists and tangles. We crawl along our strands until we touch the people who are meant to be in our lives. The strands can knot, as mine did with Lily’s but they don’t break, and the unexpected paths are often the best ones.”

Lily notices Antoinette doing something strange — digging her hands into dirt around wilted flowers. They revive. Other flowers and shrubs she touches bloom early. Shocked, Lily confronts Rose and Seth, who know the truth — Antoinette is a miracle.

She can touch people and hear their songs. She can hum to the tune of their beings. She can hear music in the trees and the grass, the animals, the water. It hurts her to focus on someone’s face, but she longs to touch, to take away pain, make the notes right again. And when she does, her body reacts violently.

That touch becomes the family secret, a precious gift Rose knows could cost Antoinette her life. As Rose’s health worsens, she refuses to let her daughter touch her.

Will  puts the pieces together and understands how precarious Antoinette’s life is.

Antoinette dreams, “She searched until she found a word that calmed her body and made her feel whole. She plucked it and placed it on her tongue. The word tasted like blueberries, sweet and tart at the same time. ‘Mommy,’ she said as it slid down her throat.”

Knipper’s writing is at its best in Antoinette’s voice.

What’s beautiful about the book is the deep love between mother and child, sister and sister, man and woman. There’s a sense of abiding hope amidst sorrow, of life and light, underscored by the flowers, always the flowers.

Rose knows the language of dying, and Will suddenly understands the greater meaning of life.

The novel is about how all those sounds, the hum of the plants and the people, the words spoken and unspoken, the infinite power of touch, makes us human and divine. It shows that love itself is the miracle.