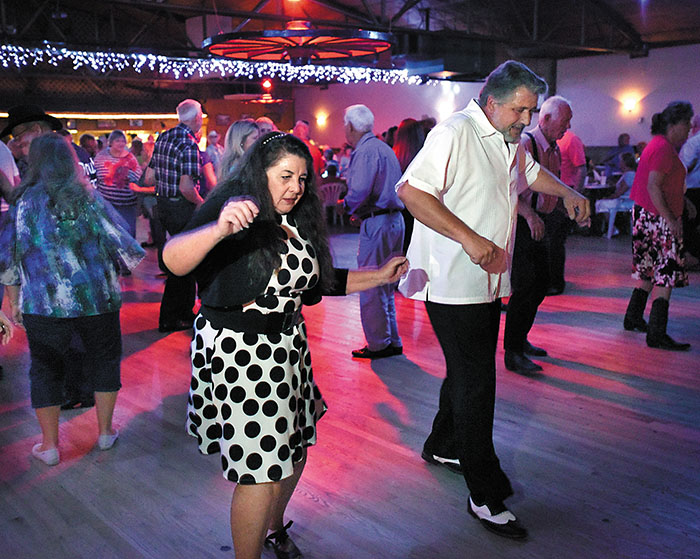 Dancers Vickie and Kelly Shaw from Mocksville at the Shoaf's Wagon Wheel on the final night. photo by Wayne Hinshaw, for the Salisbury Post

SALISBURY — Carrie Ray has celebrated her birthday at Shoaf’s Wagon Wheel for many years and just ahead of her 80th birthday, the longtime favorite Saturday line dance spot will close its doors for good.

The Salisbury resident has always sat at the same front table nearest the door, a table where she can see the featured band, the dance floor and be close to the exit if she wants to go mingle with others outside.

After 52 years, owners Jimmy and Jean Shoaf with their daughter Tonya and son-in-law Jason decided to close the place. The family said the close was an economic decision and due to smaller crowds. The crowds over the years may have been smaller than during its heyday, but no one would’ve been able to tell on Saturday.

Many longtime patrons, some of whom had not been there in years, just had to cut a rug on the floor one final time.

Ray said she doesn’t dance much anymore because of back issues, but years ago, it was one of the major reasons she attended.

When her husband, Daniel, died 23 years ago, Ray needed something to do. She could’ve gone anywhere else to socialize, but at those places “there were old people” and Ray said she wanted “a place with fast music.”

The Wagon Wheel has always been about more than just dancing, she said. She’s seen Tonya and Jason’s children grow up. Ray said there is a family atmosphere at the establishment.

Ray has always been one of the first to arrive, but has always left around 10:15 p.m. so she could get to bed early enough to wake up for Sunday School.

“I told my pastor I may not make it Sunday,” she said with sly grin.

Ray said since it’s the last time those doors will open, she planned to stay until the end.

She’s always attended by herself and along the way met friends, like Angela Basinger, who has been coming to Shoaf’s for 18 years.

“It’s a place you could come by yourself and feel safe,” Ray said.

Basinger said she cried when she heard the place was closing.

“I’m going to miss this place something terrible,” she said.

Terri Graham has practically been attending dances at Shoaf’s all of her life. She was told by her parents, Tom and Faye when she was four she would beg to attend the dances. Her parents finally relented and let her come, but she had to sit quietly on a bench.

When her father got off the dance floor and found her crying, he softened and eventually let her dance. She would stand on his feet while he glided across the floor.

Margaret Foster met her husband, Tex, at Shoaf’s years ago when he played with the band. Today the couple have been married for 47 years.

She began attending dances at Shoaf’s when they didn’t have tables and everyone stood and mingled. She and several friends would go to Shoaf’s and leave for Myrtle Beach on Fridays.