College Football: Catawba is strong, but so is the schedule 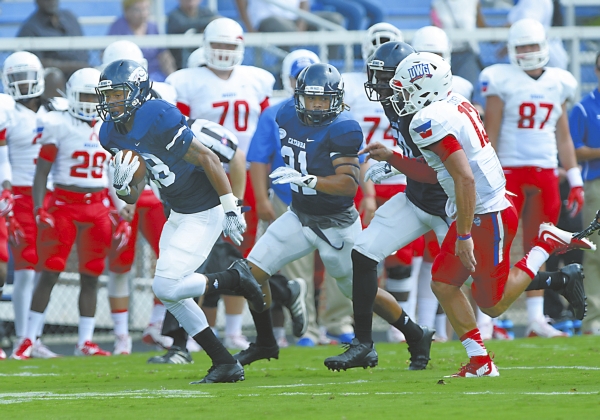 SALISBURY — Catawba head football coach Curtis Walker watched his 12-year-old son Jalon sing the national anthem prior to the Kannapolis Intimidators game on Saturday night.
“It was F&M Bank Night, the timing was right, and we were glad to accommodate them,” Walker said. “Jalon sang, and then we saw the rain coming in. That’s when we headed for home.”
Walker was savoring the waning moments of calm family time because another storm is brewing.
Next Saturday won’t be peaceful for Walker, a Catawba Hall of Fame linebacker who is beginning his fourth season as head coach. On Sept. 3, Catawba kicks off a new season in Carrolton, Ga., at 2 p.m. against a West Georgia squad ranked second nationally in the American Football Coaches Association preseason poll.
Walker has elevated the Indians in each of his three previous seasons. Catawba has risen from middle of the pack in the Division II South Atlantic Conference to respected status as defending league champion, preseason favorite and regional contender.
Possibly even a national contender. Catawba is ranked 22nd by the AFCA. Saturday’s game will tell Walker, his staff, the players, the fans and the pollsters exactly where the program is. West Georgia’s depth and experience proved to be too much for the Indians last season and the Wolves whipped Catawba, 44-13, at Shuford Stadium.
But now Catawba has added depth and experience.
The first steps for Catawba’s latest journey were taken shortly after the 26-16 home loss to Tuskeegee in the first round of the playoffs ended the 2015 season.
Players stayed in town over the summer months, working out together, not just to stay in shape, but to build the bonds that make the difference between being good and being great. Some players who were hurt are now healthy. Some players who had options to move on after getting a degree did what they needed to do to be eligible for a final football season.
“We’ve been enjoying the opportunities to get better, trying to build teamwork and chemistry,” Walker said. “A lot of things are in place.”
The defense, the No. 1 reason Catawba went 9-3 last season, returns nearly intact, and that’s a scary thing for opponents. Nine starters are back, all of them exceptional athletes. All are healthy and a year stronger and smarter.
Missing from the unit are lineman Jonathan Jean and DB Mark McDaniel, very good players, but replacements are on hand. The three most decorated players on the defense return. Linebacker Kyle Kitchens should be one of the best in Division II. The All-American was the SAC Defensive Player of the Year and the Southeast Region Defensive Player of the Year. Cornerback Case Woodard and defensive lineman Calvin “CJ” Barksdale also are returning all-region players.
“Those three guys are capable of great things,” Walker said. “Kitchens (a junior) is becoming, not just an outstanding player, but a leader for the defense.”
Walker admits he had concerns about the offense until the final three days of camp on Aug. 14-16.
“Our offense had been struggling some, and I wasn’t sure if that was because our defense was just that good or if the offense was making too many miscues,” Walker said. “But the offense came on those last three days. (Returning QB) Mike Sheehan is giving that unit a lot of leadership.”
Sheehan, a former walk-on who blossomed into a star at Catawba, is about as dependable as it gets. He’s on the preseason All-SAC second team. He can make plays with his legs and he completed 60 percent of his passes as a junior.
The Indians will miss leading rusher Cary Littlejohn, but experienced backs, led by elusive David Burgess, are still around.
Walker is looking for Keyon West to pace the receivers.
“Keyon slimmed down a little, he got quicker, and he’s one of our most improved guys,” Walker said. “We’re going to try to get him in positions where he can make plays.”
The offensive line should be stout. Quinzavious Sands is only a sophomore but already is a beast at guard. Brandon Floyd, an exceptional tackle who missed last season with a knee injury, is back on the field. T.J. Olsen has been around a long time, and the fifth-year senior provides leadership. Sophomore Kieran Castillo has made the biggest strides among the young linemen.
For the first time in a long time, Catawba’s doesn’t have an area where there are question marks or where the team is really young.
That includes special teams.
Steven Bartlett is an all-conference long snapper. Caleb Berry, one of the SAC’s best punters in 2014, missed last season with eligibility issues, but he’s back in action.
Lee Brackman, a redshirt freshman, will kick off. Walker said there’s still close competition for the job of kicking PATs and field goals between Brackman and true freshman Brennan Lambert.
The staff is stable. The biggest addition is the return of Bob Lancaster, a Catawba assistant from 1998-2012 for David Bennett, and then Chip Hester. Lancaster will coordinate special teams, a task he handled capably in the past for the Indians.
“It’s not like special teams have killed us, but we can improve,” Walker said. “At times, our special teams have got us into situations that weren’t great.”
The Indians have to be ready from the opening coin toss for a schedule that will be one of the toughest in history, especially the first half. After West Georgia, Catawba will take on CIAA champ Winston-Salem State and perennial power Carson-Newman at home. Then they’ll travel to Wingate, a program that has been a nemesis, and Newberry, which may have the SAC’s most talented roster.