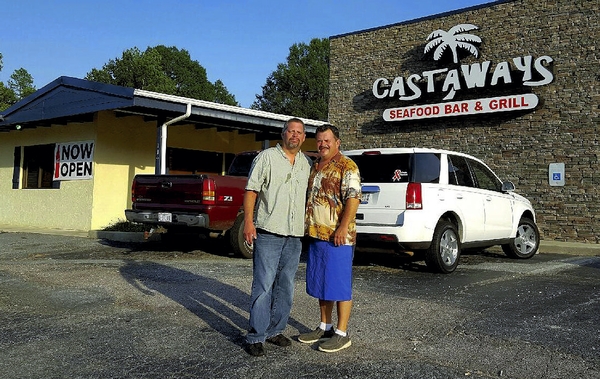 SALISBURY — Duke Hunt said it had always been a life-long dream to own a restaurant. He and his business partner Jesse Goldin are both “lovers of food,” so when they heard the property at 119 N. Link Ave. was available, they jumped at the chance.

The sign of the former Castaways Seafood & Oyster Bar was still hanging on the building, and Hunt said they liked the sign so much they decided to keep it while tweaking the name a little bit.

Castaways Seafood Bar and Grill is open and ready to serve Salisbury “top-shelf seafood” at the same location of the previous Castaways.

Castaways Seafood & Oyster Bar closed in September of 2013 after six and a half years of business, according to its Facebook page.

Hunt and Goldin decided to keep the Castaways name, but Hunt said they are in no way associated with the previous owners.

Castaways Seafood Bar and Grill will be serving sustainable, boat-to-plate seafood, including oysters, shrimp, fresh salmon, tuna, mahi and other fishes. Hamburgers, Po’boys, lobster and shrimp rolls and salads will be included on the lunch menu. Dishes will also feature stockyard steak and a dry-aged pork chop. There will be daily specials and featured items on Sundays.

Hunt said he was excited to bring Castaways back to Salisbury.

“People in this town have been waiting,” he said, mentioning the number of Facebook likes the restaurant’s page had received, which was at more than 1,000 as of Thursday evening.

Hunt graduated from North Rowan High School and worked at the restaurant when it was Qunicy’s.

He went on to own Rusty’s Pub and Grill and ultimately has 16 years of experience in the restaurant business.

Hunt worked in sales for the past 15 years, but he said he got tired of all of the traveling.

“I was ready to go back in business for myself and be home every night,” he said.

Hunt and Goldin met through Hunt’s brother, Rusty Lakey, about two and half years ago. Originally, Goldin and Lakey wanted to start a restaurant together that would have been a small café-type eatery, but they could never find the right-sized location.

When they learned the property on Link Avenue was available, Goldin paired with Hunt to start the restaurant.

Goldin was born in New York but raised in Salisbury for most of his life. He actually spent the last 18 years working with Richard Childress Racing as a brake specialist.

He said being involved with Castaways was a good way to bring fresh, quality, affordable seafood to Salisbury that customers might have only been able to get out of town.

“I figured this town needed some more fresh fish,” he said, adding that the menu will stay away from fried seafood as much as possible unless the customers request it.

Goldin said he has no experience in the restaurant business, but the 30 part-time and full-time employees have about 150 years of experience between them, according to Hunt.

That includes Lakey, who owned several restaurants in the past.

“I really wanted to have a nice place where people can bring their families,” he said about the restaurant.

Casey Conlin, from New York, is the sous chef. In his 30 years in the restaurant business he’s worked in country clubs in New York and New Jersey and was an executive sous chef at the Salisbury Country Club.

He said the restaurant will be using fresh ingredients and will get those ingredients locally as much as they can.

Conlin said he was excited that the restaurant was finally opening.

“We’re definitely going to surprise Salisbury with the food we’re putting out,” he said.

Jonathan Belin, a chef from Connecticut, has been cooking for 22 years. He has worked in fine dining restaurants in New York City and can pretty much cook in any style.

He said he wants to infuse some southern style into the recipes he has learned from up north.

Hunt’s daughter Hailey is managing the servers and hosts. She said she’s loved the restaurant business ever since helping out with her father’s first restaurant. She is studying full-time to become a radiologic technologist, but she said she will still work at the restaurant after earning her degree.

“To me, it’s about serving good food, making people happy,” she said.

Kandiss Hunt, another one of Hunt’s daughter, is managing the bar side of things. She said she got her bartending experience working at bars in Myrtle Beach, but this was her first time managing a bar.

The restaurant serves liquor, wine and beer, including locally brewed beers on draft. There will also be beach-themed cocktails and a Bloody Mary made from a house-made mix with red vein Argentine shrimp.

Kandiss said she is open to suggestions from customers on what products they would like to have at the bar.

She said she also helped out in her father’s first restaurant and thinks this restaurant will have the same family vibe.

Hunt said he wants to take care of his employees and help them prosper.

“I want the staff to be here forever,” he said.

Goldin and Hunt worked with US Foods to develop the menu design and pricing.

Joey Rowland, a restaurant operations consultant for US Foods, said they work to “inspire, attract and optimize” their restaurant partners, and as the restaurant partners grow, US Foods is able to grow as well. They also recommend other services to help with things like web design.

“We want to make sure we’re a partner with local restaurants to help them succeed,” he said.

Rowland trained the wait staff last Sunday and worked with the chefs on Monday.

It took about seven months to renovate and outfit the building. The space is divided into three areas — the center room, which seats 100 and includes the bar with two full stations, a “porch cabana” room that seats 56, and a banquet room that also seats 56.

Hunt said the banquet room could be used for events like reunions and meetings for the Boy Scouts, Greek organizations and colleges and Sunday football watch parties. There have already been seven reservations.

There are both tables and booths, and the colors on the walls include sunset orange, battleship gray and ocean blue to match the ocean theme. There are also anchors, lighthouses, seashells and fishing rods hanging on the walls.

The parking lot may be one of the biggest restaurant parking lots in the city.

Castaways Seafood Bar and Grill will be open this week Tuesday through Thursday from 11 a.m. to 9 p.m., Friday and Saturday from 11 a.m. to 11 p.m. and Sunday from 11 a.m. to 6 p.m. They will hold a grand opening celebration on Sept. 17, but until then Hunt said they will be taking things slow and asked for patience as they work out the kinks.

Hailey Hunt said she thought the restaurant had a good team of people and hopes that the community will come out and give them a try.

“We’ll be waiting on them,” she said.

NC DOT secretary to kick off Chamber’s Power in…