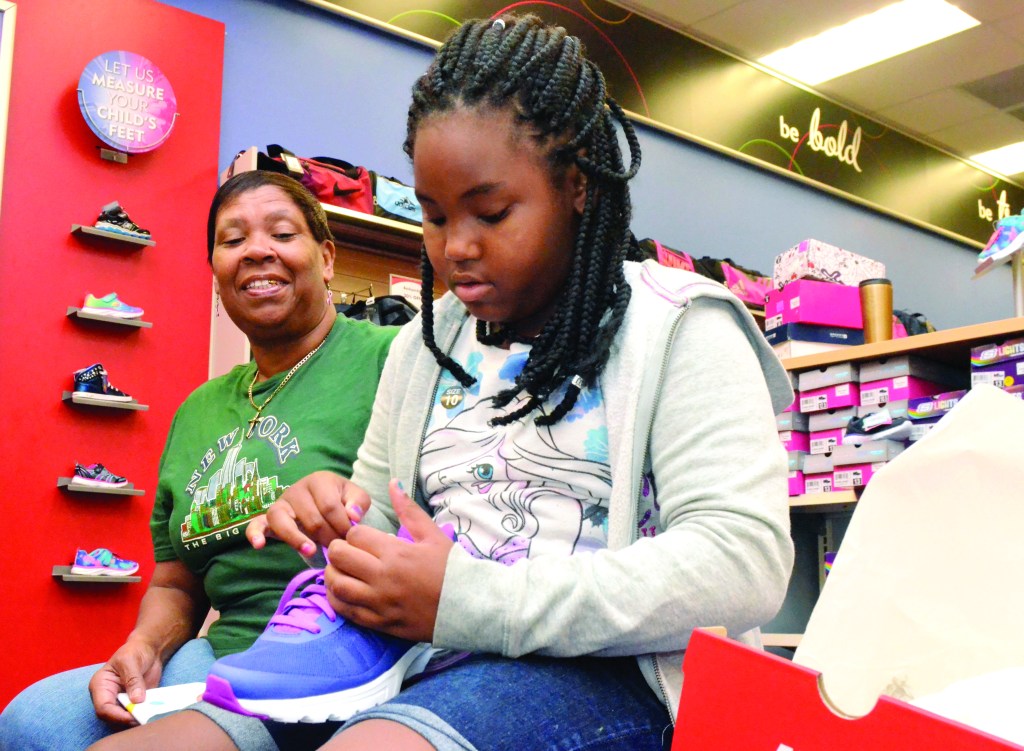 Ka'nia Osby, 8, laces her new shoes as her grandmother Linda Madison looks on. The third grader was among about 90 children who were invited to attend Happy Feet, a shoe giveaway event, sponsored by the Salisbury Rotary Club. The Club obtained a matching grant from the Rotary International Foundation. The children were able to try on shoes and pick out the pair they liked at Shoe Carnival early Saturday morning. Shavonne Walker/Salisbury Post

SALISBURY — For more than a week and a half, Ka’nia Osby repeatedly asked the same question — “Granny when are we going to get my shoes?” It was a question she already knew the answer to, but nonetheless was excited about the answer.

“On Saturday,” was always the response.

The 8-year-old was one of nearly 90 children who were able to “shop” for a pair of new shoes at Shoe Carnival on Saturday during an event called Happy Feet.

The Salisbury Rotary Club, through a matching grant from the Rotary International Foundation, was able to provide the money for the shoes.
All the children had their feet measured and chose a pair of shoes they liked.

Brown, who moved to the area with his wife, was instrumental in bringing the idea to the Salisbury area. He was a member of the Rotary in Pinehurst where he met a man, Ed Biebrich, who was a member of a Rotary club in California. Biebrich brought the idea about partnering with Shoe Carnival to provide shoes to school children.

Brown said the Salisbury Rotary Club contacted the Rowan-Salisbury School System, which was then able to connect the Rotarians with the children in need or deserving of shoes. All of the children at the Salisbury event were rising third graders.

Brown also contacted Shoe Carnival general manager, Erin Michaud, who, along with a few employees, helped measure the children’s feet and got them properly fitted for shoes.

“Shoe Carnival has been most cooperative,” Brown said.

The families were notified of their selection.

Madison said she counted it a blessing that her granddaughter was able to get school shoes. Madison has been raising the 8-year-old since she was born because the child’s mother is addicted to drugs and has some other ongoing issues.

Toni Pendry is also a grandmother raising her six grandchildren who are from 8 to 18 years old. She brought her grandson, third grader Leonardo “Leo” Gonzalez, 8, to pick out some shoes.

The shy little boy went to the store counter after getting help picking out a brightly colored pair of sneakers. He silently walked out of the door and went right over to Pendry to show her his shoes.

“I live on disability. I was like, ‘Thank God,’ ” Pendry said of the opportunity for Leo to get school shoes.

She said his shoes were one less thing for her to worry about.

Salisbury Rotary President Brad Bost said he is thankful to Henry Brown, who brought the idea to the club, and thankful to the Rotary International Foundation for the grant that enabled the club to provide the shoes.

Lisa Wise is raising two girls who are not hers biologically. Their mother is a friend of the family and asked Wise to take care of them. She agreed and, since the children are not fostered or adopted, she doesn’t qualify for many benefits. She’s been taking care of them since June 2013.

Wise said she’s thankful the girls, Alyssa Mummert, 8, and her sister Emmily Connelly, 9, were able to get some shoes.

She said it was “greatly appreciated.”

Dr. Lynn Moody also joined in to help some children on the hunt for the perfect shoes.

“I’m really grateful to the Rotary Club and to Shoe Carnival to make this a special day for these children,” she said.

Moody said it’s hard to underestimate what a new pair of shoes means to a student on the first day of school.

She said she enjoyed her time at the event and looks forward to reconnecting with some of the students on her school visits to see them in their new shoes.