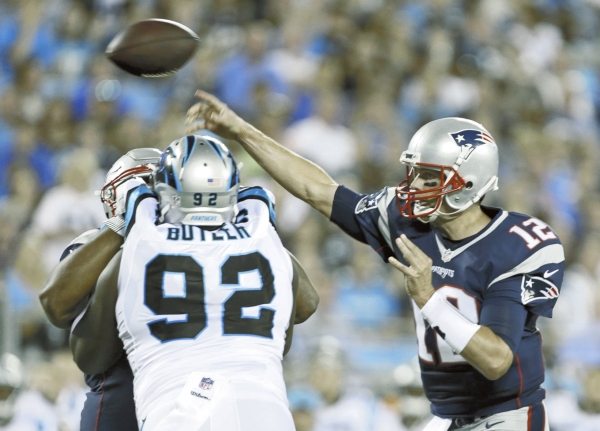 Unfortunately for the New England Patriots, they may not see that form in a meaningful game until Oct. 9 when they face the Cleveland Browns since the three-time Super Bowl MVP will serve a four-game suspension to start the season.

Brady looked sharp in his preseason debut though, throwing a 33-yard touchdown pass to Chris Hogan in helping the Patriots to a 19-17 preseason win over the Carolina Panthers on Friday night.

Brady relieved Jimmy Garoppolo late in the first quarter and completed a 37-yard pass to Aaron Dobson on his first play from scrimmage, leading to a field goal. On his second drive Brady heaved a perfectly placed over-the-shoulder pass to Hogan down the right sideline for a 9-0 lead. Brady’s other two drives failed to produce points.

Brady made a quick escape after the game and did not talk to reporters.

“We’ve moved ahead in a lot of areas, but we’re certainly not where we need to be,” Patriots coach Bill Belichick said. “I don’t think any player is, any coach is, I’m sure no team is at this point. We’re all making progress, which is good. We’ve just got to keep our foot on the gas and make it as quickly as we can.”

While Brady was on the mark, league MVP Cam Newton struggled mightily in his most extensive playing time of the preseason. Newton was intercepted twice and the Panthers failed to get any points on his eight first-half possessions. Overall, the Panthers scored just three points in 10 Newton-led drives.

The sixth-year quarterback was high on some passes and didn’t get much help from his receivers, who had problems getting separation and dropped four passes, including one by Brenton Bersin on a fourth-and-2 at midfield.

Panthers coach Ron Rivera said he was frustrated, but “if we lower our passes and catch the ball, then we are where we need to be.”

“We need better production from everybody including myself,” Newton said. “I have to be more mature and check the ball down and let guys do what they do.

“We will be better from this.”

New England shut down the league’s highest-scoring offense from a year ago, intercepted Derek Anderson and allowed only one passing play of more than 15 yards in the first half.

Garoppolo, expected to start the first four games for the Patriots while Brady serves a suspension for his role in “Deflategate,” returned in the second quarter but couldn’t get anything going.

In the third quarter he rolled out of the pocket while under pressure and missed an open receiver who’d gotten behind the defense. His six drives resulted in no points, although Stephen Gostkowski missed a 30-yard field goal on the New England’s opening possession.

“Overall, there were some good things we did tonight, but we have to get the little things corrected or they’re going to bite us in the butt,” Garoppolo said.

Panthers: Newton was 13 of 29 for 100 yards with two interceptions and ran once for 9 yards.

Patriots: QB Jacoby Brissett connected on a 12-yard TD pass to DeAndre Carter to give New England a 16-3 lead late in the third quarter. That was set up by a 60-yard punt return by rookie Cyrus Jones.

Panthers: CBs James Bradberry and Daryl Worley fared well. Veteran Bene Benwikere, who is competing for one of those two starting spots, gave up a touchdown pass.

Patriots: Call it even at running back, Tyler Gaffney had 32 yards on six carries and LaGarrette Blount had 26 yards on five carries, including a 17-yard run in which he hurdled Panthers safety Tre Boston as he broke into the secondary.

Panthers: Rookie punter Kasey Redfern had a pair of 60-plus yard punts, while veteran Mike Scifres shanked a 21-yard punt and left with an injured knee.

Patriots: The Patriots reported no injuries.