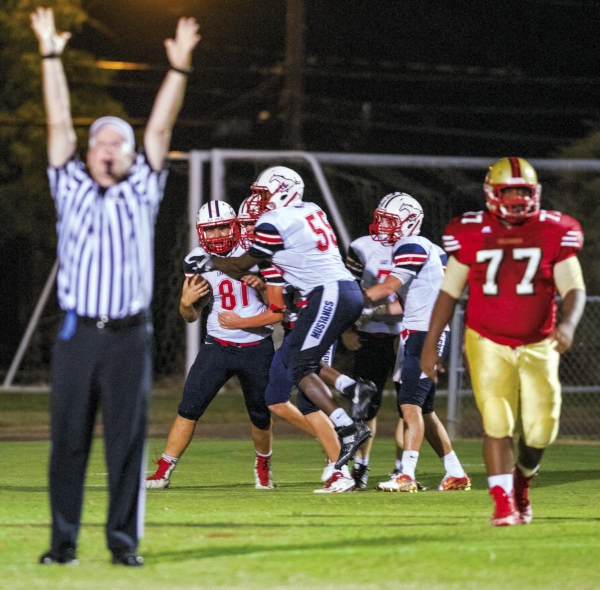 JON C. LAKEY / SALISBURY POST ... East Rowan’s Zack Simpson (81) is mobbed by teammates in the end zone after he ran back an interception for a touchdown, last night against Salisbury at Ludwig Stadium. The Mustangs went on to a 33-7 victory.

SALISBURY — After a first-half stalemate with host Salisbury High, the East Rowan defense took matters into its own hands at Ludwig Stadium last night to generate a much needed 33-7 win.

After a 7-7 standoff in the first half, East Rowan’s defense not only kept the Hornets (1-1) pinned deep in their own territory over the final two quarters, but scored a pair of touchdowns and set up another with a fumble recovery.

“Now that was good defense,” East Coach Kenneth McClamrock said afterwards, “Our defense played lights out, especially in the second half, and got us a couple of scores and some takeaways.”

The Mustangs (1-1) had taken a tenuous 13-7 lead late in the third period on a 43-yard sprint by Max Wall. Big defensive lineman Zach Simpson rose up and snatched a screen pass from Salisbury QB Griffin Myers out of the air and rumbled 29 yards for a pick-six and the first of two defensive daggers.

“I read the screen and the lineman let me go,” said the 6-2, 205 pound sophomore Simpson, of his big play. “So I backed up, saw it coming, grabbed it and just took off.” Noting it was his first ever touchdown, Simpson said it was a big turning point in a tight game. “I feel like it just changed the emotions of the game from there on.”

The next defensive dagger came as the fourth quarter opened when another Myers screen play was low and incomplete to the receiver. Linebacker Christian Bennett alertly picked it up and scampered four yards for a touchdown as the officials ruled the pass a lateral and a live ball.

The conversion made the East lead 28-7 with 10:35 left in the game, causing Hornet coach Ryan Crowder to lament, “We ran two dad-gum screens the whole game and both of them scored touchdowns,” he said, “Its just they were scored by the wrong people.”

East drove in the final nail on the ensuing kick-off when Mustang Steven Hardin pounced on a loose ball, giving East the ball at the Salisbury 32-yard line. Five plays later, speedy sophomore David Broaddus scored on fourth down from the five-yard line to make it 33-7.

Along with the stellar defense, East did have some bright moments on offense, most notably from the senior halfback Wall. He rushed for 141 yards and two touchdowns for the game, and in the process became the Mustangs all-time leading career rusher with 2795 yards.

Wall’s 16-yard run on the second play of the third quarter broke the record (2698 yards) set in 2001 by Cal Hayes, Jr. “It is great and I am happy about it (the record),” Wall said, “But we still have a lot of work to do. Tonight, I finally got into a rhythm the more I carried the ball and I started feeling the defense to see what they were doing.”

In a first half marred by numerous penalties on both sides, Wall gave East the first lead at 7-0 on a two-yard run in the second quarter. But another East touchdown was called back by a penalty and on three occasions in the first half, the Salisbury defense rose up to stop the Mustangs on downs.

Salisbury went to the air in the final two minutes of the first half, using short effective sideline passes to move quickly down the field. Myers hit six passes in a row to march his team 93 yards for the tying score with just 33 seconds left in the half. Three of the completions went to Jaquarius Cuthbertson for 35 yards then Marcus Corry grabbed a four-yarder for the touchdown in the front corner of the end zone.

“That drive at the end of the first half was key for us,” said Crowder, ” But after that, we just could not flip the field. We spent almost all of the second half deep in our own territory.”

Penalties were also a major factor throughout the game as both coaches noted the number of flags kept their team from getting any rhythm. “The penalties really hurt us tonight,” McClamrock stated. “But were able to work through it with our defense.”

For the game, East was whistled for 12 infractions and 115 yards while the Hornets received 13 penalties for 125 yards.

The Mustangs also got a big lift on offense from sophomore Justin Smith who played the entire game at quarterback when senior starter Tate Houpe was unable to go due to illness. Did he come to the stadium tonight knowing he was going to play the whole game?

“No I didn’t,” Smith said. “But I was ready though I have been studying all week and I know the offense. I really wasn’t that nervous.” Smith played error free, passing for 29 yards and rushing for a net six yards.