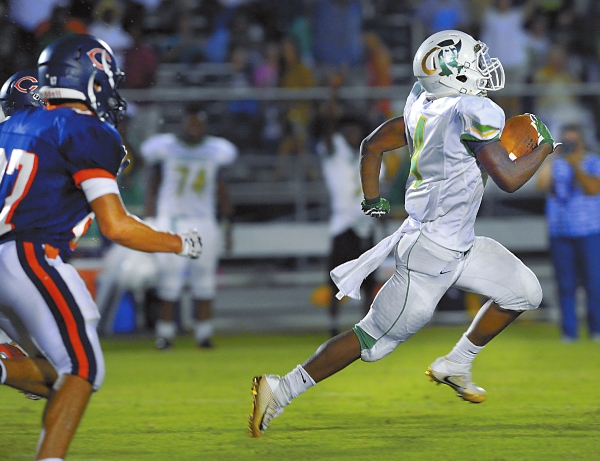 Wayne Hinshaw/for the Salisbury Post ... In what may have been the key play of last night’s game, North Rowan’s Jaden Perry (4) returns a kickoff 99 yards for a touchdown against Carson. The score was 10-3 at the time and the Cavaliers went on to a 45-3 victory.

CHINA GROVE — It may sound silly, but North Rowan’s 45-3, running-clock romp at Carson on Friday was a matter of an inch or two.
The key events transpired in the second quarter. Carson’s defense was getting stops, and then Owen White, one of the three quarterbacks who took snaps for the Cougars, broke a big run down the home sideline. When North DB Chris Clodfelter was flagged for a hit out of bounds at the end of that play, Carson had first-and-goal at the North 9.
From there, the Cougars moved in reverse, and when Zion DeBose and Steven Thurston sacked White on third down, Carson was back on the 28 and looking at a 45-yard field-goal try.
Cole Howard made that long kick, his field goal traveling straight and true and roughly 45 yards and one inch. He cut North’s lead to 10-3.
“Carson had the momentum for just a little bit right there,” said Thurston, the Cavaliers’ powerful nose guard. “But then we got it right back, and we kept it.”
North got the momentum back when Howard’s kickoff traveled almost to the end zone, but not quite into it. North’s sophomore speedster Jaden Perry cradled the ball into his arms inches from his goal line, got some blocks and spotted daylight.
“I didn’t even see who got the blocks for me, I was just running,” Perry said. “I found a hole — and I took it.”
Perry didn’t stop until he’d sprinted 99 yards, and North’s 10-3 lead was suddenly 17-3. A big Carson crowd was quieted.
“That kickoff return was a dagger — a knife in the back,” Carson coach Joe Pinyan said. “When you kick it long and high and down the middle and it doesn’t get to the end zone, there’s a good chance for a big return. Guys have good blocking angles and they’ve got time to set up their blocks.”
Carson (0-1) may have been able to regroup had it been able to get into the locker room down 17-3, but North’s defense was swarming and Carson’s reeling offense lost 18 yards on one disastrous play. North got the ball back quickly at the Carson 40 and scored again before halftime on a Corbin Smith-to-Alonzo Sirleaf pass play.
“It did’t seem like we threw the ball all that much,” said Smith, who put the ball in the air 16 times. “But we were hitting big plays when we did.”
After a two-point conversion by backup QB Willis Mitchell, it was 25-3 at the halftime break, and it was all but over.
“We came out for the second half knowing we had to establish a running game to have a chance, but we couldn’t get it done,” Pinyan said. “We had a lot of 5-yard penalties, which doesn’t seem like a big deal, but it’s hard to get 10 yards against North’s defense, so it’s really hard to get 15. We couldn’t run the ball, and that let them tee off on our quarterbacks, so we couldn’t throw it. North’s defensive front is really good, and we played bad. We made them look even better.”
North held Carson to less than 2 yards per running play and didn’t allow a first down in the second half.
“We worked hard all week to stop Carson’s option stuff,” North defensive end Darren Williams said. “No one knew who Carson’s quarterback was going to be, but we were prepared for everything they did.”
North’s offense went three-and-out to start the game, but on North’s second possession, Smith faked a handoff on a third-and-1 play and fooled the Cougars. He showed some speed dashing past defenders for the 37-yard score that gave the Cavaliers a 7-0 lead.
North couldn’t put the ball in the end zone on its next two possessions, but Jacob Young’s 41-yard field goal at the end of the first quarter made it 10-0.
“We started sluggish on offense with a lot of mistakes and a lot of penalties,” North coach Ben Hampton said. “That was a big field goal.”
After Perry’s kickoff return and Sirleaf’s scoring reception pushed the lead to 25-3 at halftime, North finished off the Cougars in the third quarter.
“We didn’t really need to make halftime adjustments,” Thurston said. “Our defensive backs were getting great coverage, and the defensive line was stopping the run and getting pressure. We just had to keep doing what we’d been doing.”
Smith threw another touchdown pass to Sirleaf to push the lead to 31-3 with five minutes left in the third quarter, and Carson was bitten by the turnover bug. Two minutes after Sirleaf’s second TD, Jayden Jones scored on a 9-yard run. North finished the scoring in the final seconds of the third quarter when Smith connected with Dennis Rivers to bring on the running clock.
“We were all glad to see Rivers get a score,” Thurston said. “He’s been a defensive back, but we had an injury at receiver (Deandre Gray), so Rivers moved over to offense.”
The heartbreat for North’s offense was hard-running back Jaleel Webster, who had second-half runs of 27 and 37 yards. Jayden Jones broke a 30-yarder after the break, and it would’ve been more if he hadn’t lost part of it to a holding penalty.
“I thought we got a lot of effort from everyone, and our backs broke a lot of arm tackles,” Hampton said. “And that kickoff return was just huge. When Perry touches the ball he always has a chance to score, and that return was, no doubt, the big swinging point in this game.”
That return led to a win that has North fans excited about a 2-0 start. North lost at home to Carson in a turnover-filled game last season on its way to 5-7.
“We’re playing well and coming out with a lot of intensity,” Smith said. “I can’t say enough about our defense. If the offense can give them a little time to rest, then we can have a really great season.”