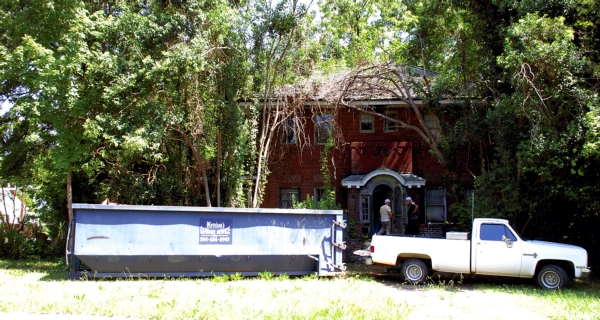 Mark Wineka/Salisbury Post A large dumpster has been set in front of the house at 128 W. Thomas St., and it is slowly being filled with debris from inside. Historic Salisbury Foundation has been working several months with owner John Cheek in trying to save the house and find a buyer.

SALISBURY — Historic Salisbury Foundation says a 1922 West Thomas Street home, which only recently has been uncovered from years of tree and other vegetative growth, is under contract to be sold.

But first, HSF staff members and volunteers are working with longtime owner John M. Cheek in trying to rid the interior of years worth of accumulated items and debris, much of which is literally is being shoveled out of the house.

The work could take many weeks. A large dumpster was brought in and set in the front yard. On Friday, HSF Executive Director Karen Hobson was joined by Cheek, Brian Pfaff, Mark Truex, Doug Black and Gene Krueger in hot, sticky work just inside the front door.

On Thursday, HSF made a path so it could get in and out. Cheek is going through his things and directing some of the cleanup.

“You can see why Mr. Cheek has been overwhelmed with it,” Hobson said, adding how it is important in lending him manpower for the cleanup. She did not reveal who is interested in buying the property.

The Colonial Revival house is roughly 3,500 square feet and the city had slated it for demolition until HSF stepped in, asked for an extension, removed some of the overgrowth and looked for potential new owners, with Cheek’s permission.