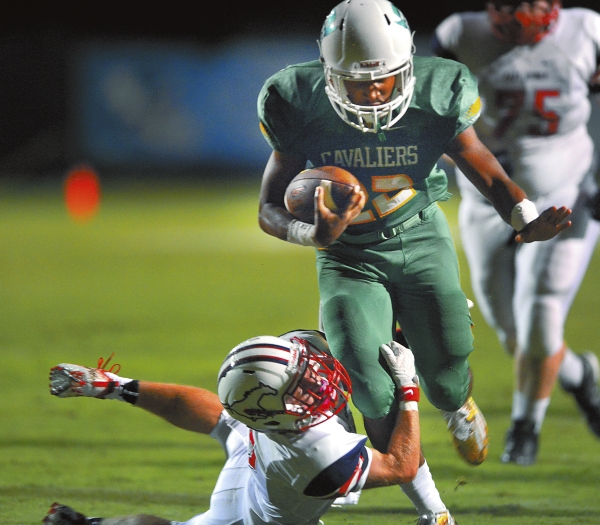 Previews for Week 2
The Week 1 football picks proved conclusively that I failed miserably to make a smooth transition from a long baseball season (February to August) that ended just three days before football kicked off.
Opening night is frequently tricky. Everyone is optimistic, but no one really has any clue what’s going to happen because it’s the first game under the Friday night lights for a lot of players.
Still, 1-for-4 was dismal. No excuses. A chimpanzee flipping quarters will pick half the games right, so I was 25 percent worse than the average member of the Animal Kingdom.
Walking off the field at North Rowan at 11:40 p.m — yes, 11:40 p.m. — where North had just battered an East Rowan team that I’d picked to defeat the Cavaliers for reasons that I can’t recall, North assistant Aaron Rimer asked me for the West Rowan score.
When I informed him that West had edged Mooresville, he responded cheerfully, “Hey, you got one right.”
Thank you, West Rowan. It was almost an 0-for-4.
Years ago, I vowed that if a great Davie County team lost to a so-so Alexander Central team that I would never pick again. Needless to say, Alexander Central promptly pummeled the War Eagles. I did retire briefly, living up to my pledge, but I eventually returned because the public insisted on having picks in print to laugh at.
Scarred but not scared, I press on to the Week 2 picks, although this is an equally difficult week. Well, it’s difficult with the exception of the A.L. Brown-South Rowan game. That one was 67-0 last year, and I think we can all pick the winner.
But the other three? I’ll admit I’ve got no idea what will happen.
Davie had a fantastic Week 1 win, but something always goes wrong for Davie when it plays West Rowan. Davie wants to score 50. West wants to grind it out. I’m not sure whose style will prevail, but it should be the game of the night.
East Rowan has been bulldozing Salisbury in recent years, but now Salisbury is 1-0, while East is 0-1. This could be a tight one.
North Rowan looked pretty darn good on opening night, but Carson is still a mystery. It’s opening night for the Cougars.

North Rowan (1-0) at Carson (0-0)
What happened in 2015: North had a substantial edge in yards gained, but five turnovers negated that advantage, and Carson won, 44-26, on North’s field.
Last week: North was a winner, 28-14, against East Rowan, and it looked like the Cavaliers, who controlled the line of scrimmage, should’ve won by more than two touchdowns.
North looked as good as expected on defense, where it has three first-team all-county players back, plus several second teamers. North looked better than anticipated on offense. QB Corbin Smith threw accurately, while the line ripped gaping holes for quick backs.
This will be Carson’s first game.
The series: Carson ended a three-game skid against North Rowan last season and leads the series 5-4.
History: The long-awaited first victory for Carson football came in 2008 against North and ended a 22-game losing skid.
Player to watch: North receiver Alonzo Sirleaf caught a 79-yard TD pass against the Cougars last season.
Pick: North Rowan 24, Carson 17

South Rowan (0-1) at A.L. Brown (1-0)
What happened in 2015: It was one of those thank-goodness-for-the-running-clock games. The Wonders led 53-0 at halftime. Jayvee backs punched in two more touchdowns in the second half and the final was 67-0. It was hard to find any positives for a South team that had negative rushing yards and managed two first downs.
Last week: A.L. Brown lost quarterback Cordarius Butler to injury in the second quarter, but its defense stuffed a ranked Concord team in a 31-19 win. Concord had a big-play TD on a screen pass, a punt return TD and a defensive TD, but the Spiders had minus-23 rushing yards, and that doesn’t bode well for the Raiders.
South turned it over seven times in a 33-9 loss against Salisbury. That doesn’t bode well, either.
The series: The Wonders have won six straight since the Raiders knocked them off in 2009. The Wonders lead the overall series 45-8-2. There hasn’t been a close game in a while. Since that thriller at Donnell Stadum in 2009, the Wonders have won every matchup by at least five touchdowns.
History: The schools have squared off every year since 1961 when South opened, but the series will be ending, at least for a four-year period, when South goes into a 10-team 2A league next season. South will have room for only two non-conference opponents on the 2017 schedule, and that’s expected to be Carson and East Rowan.
Player to watch: With Butler out for an extended period, senior Zach Williamson will direct the Wonders.
Pick: A.L. Brown 42, South Rowan 7

East Rowan (0-1) at Salisbury (1-0)
What happened in 2015: East whipped the Hornets, 33-0, although looking at the statistics from that game, it’s not readily apparent how the scoreboard could’ve been so one-sided. Keith Tillman scored four TDs for the Mustangs, who were focusing on Max Wall.
Last week: Everyone agrees East has talented skill people, but protecting the quarterback and opening holes for the running backs are still necessary for success. East was outplayed on both lines in a 28-14 loss to North Rowan. East had no running game, even with Wall, who has nearly 3,000 career rushing yards, while North rushed for nearly 250 yards.
Salisbury had its way with South Rowan in a 33-9 victory, rushing for 200-plus yards, but the jury is still out on whether Salisbury is that much better than it was in 2015. South turned it over seven times, basically rolling out a welcome mat for the Hornets.
The series: While Salisbury still leads the overall series 28-14, East has ruled lately. The Mustangs have won the last four meetings, including three straight by lopsided scores.
History: The series dates back to 1967, but East’s first win didn’t come until the Mustangs pulled out a 3-0 decision in 1978.
Player to watch: Junior running back Isaac “Trell” Baker transferred from East Rowan to Salisbury after his freshman season. Baker, also a basketball standout, had a big opening night with three touchdowns, two on long pass plays. It will be interesting to see how Baker does against guys who know him well.
Pick: East Rowan 28, Salisbury 21

West Rowan (1-0) at Davie (1-0)
What happened in 2015: Davie led 14-0 in Mount Ulla before the game spun completely around on a Kortez Weeks kickoff return for a TD. West dominated the second half and rolled, 35-14.
Last week: Davie had a tremendous win, coming from 13 points down to beat Greensboro Page, 39-29. Page, 4AA state runner-up in 2015, was ranked in preseason polls.
West won with defense and a grinding running game led by Javon Quarles against Mooresville, taking a bruising, 12-8 victory.
The series: While Davie still leads the overall series 26-17-2, West has won seven straight in the rivalry, with the key element in most of those games being a momentum-swinging, special-teams play by the Falcons. West has scored on a kickoff or punt return against Davie in each of the last five seasons.
History: Davie’s last win in the series came in the second week of the 2008 season. West would win its next 46 games in a row, including three state-title games.
Players to watch: Davie’s pass-catch combination of Chris Reynolds and Cooper Wall did astounding things on opening night. West’s defense contained the Davie standouts last season, limiting Reynolds to 148 passing yards and Wall to five catches for 35 yards.
Pick: West Rowan 21, Davie 17