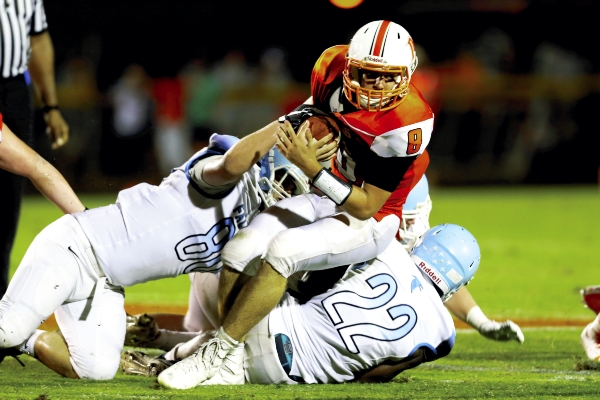 MOCKSVILLE — West Rowan held Davie County quarterback Chris Reynolds to his lowest passing yards in 12 games, ending his seven-game streak of throwing for 244-plus yards, last night at War Eagle Stadium.
The Falcons limited receiver Cooper Wall to his fewest receiving yards  in nine games, ending his school-record streak of six 100-yard games.
But Davie (2-0) administered a 41-0 beating anyway, emphatically ending a seven-game losing streak in the series with West.
That Reynolds and Wall had quiet nights by their high standards mattered not one bit because Davie’s defense played lights out and West’s punt team struggled mightily.
Cody Hendrix, the junior linebacker who is sometimes overshadowed by senior James Boyle, was a one-man wrecking crew most of the night and the rest of the unit helped overwhelm West’s offense from start to finish.
Not exactly what you’d expect from a Davie-West game, but this is without a doubt fourth-year coach DeVore Holman’s most talented team.
“Hendrix is staying off of blocks and getting his hat on people,” Holman said. “I mean, I can’t ask him to do much more than that.”
West (1-1) had five first downs, four rushing yards on 30 attempts and misfired on 15 of 21 passes. The list goes on for this rough night. It went one for 14 on third-down conversions, failed on two fourth-down tries and fumbled four times, although West recovered each one. And then there were nine punts that averaged just 20 yards.
It was a 0-0 game after one quarter, but Davie grabbed the momentum with a vice grip when a West punt was shanked for minus-4 yards at the Falcon 29. Reynolds, who went 15 of 30 for 153 yards on an injured ankle from a first-quarter hit, completed a corner route to Beau Byerly for 26 yards to the West 1. Reynolds kept it and scored on the next play.
West’s next possession ended with a punt going off the side of the punter’s foot and landing five yards downfield at the West 21. On first down, Reynolds pumped, the defensive back bit and Wall was open for a 21-yard touchdown that made it 14-0.
The next Falcons possession saw them punting from their end zone. The ball banged off the up-man, Boyle caught it in stride and scored on a four-yard return.
“We have concentrated really, really hard on our special teams, and it’s showing,” Holman said.
Yet another short punt set Davie up at the West 44.

Kicker Jared Griggs drilled a 48-yard field goal to make it 24-0 at the break. The kick tied for the second-longest field goal in Davie’s 61-year history. Davie assistant coach David Wooldridge connected from 50 yards in 2000 and from 48 in 1999.
Davie kept pouring it on in the second half. Cornerback Angel Perez’s interception and 20-yard return to the West 12-yard line set up Byerly’s 10-yard, one-handed diving catch in the end zone.
After Wall went off for 235 receiving yards in last week’s win at Page, Davie fans wondered what other receivers would step up when needed. The other targets answered the bell, with Wall and Peyton Hampton making four catches each and Byerly and Tyler Roberts three each. Will Shepherd and Brandon Hendricks had one apiece.
Hampton, a sophomore running back, capped a 10-play, 45-yard drive with a 5-yard run as the margin grew to 38-0 early in the fourth period.

Griggs closed the scoring with a 34-yard field goal.
West managed just 125 total yards, including 12 in the second half and one first down after the break.  Jovon Quarles rushed for 41 yards but lost yardage by others brought the team total down to almost zero.

Davie didn’t exactly tear it up offensively (238 yards), but favorable field position and a dominating defense more than made up for it.