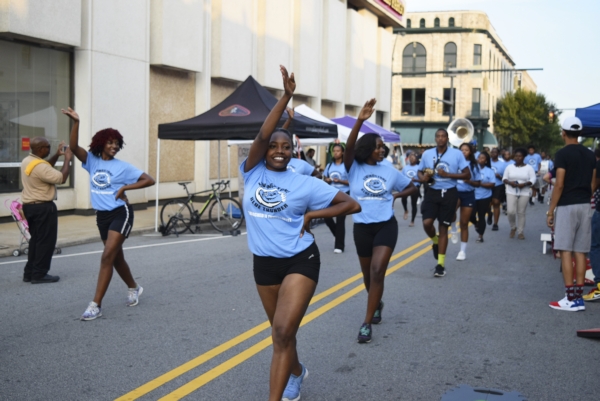 The Livingstone College marching band made an appearance at Thursday's College Night Out. Organizer Kaitlin Rice said the goal of the event was to foster friendships among Salisbury's four colleges. Rebecca Rider/Salisbury Post

SALISBURY — After a week of classes, local college students were already itching for some excitement. The promise of a food, fun and a chance to get off campus drew a large crowd out to West Fisher Street Thursday evening for Downtown Salisbury Inc.’s College Night Out.

“It seemed like fun,” Emily Pratt, a freshman at Catawba said.

It’s the third year Downtown Salisbury has hosted a College Night Out, but Katelin Rice, the organization’s promotions coordinator, said she wasn’t sure how many students would show, since the event wasn’t on a Friday.

The event started at 6 p.m., and by 6:15, the blocked-off street was thronged with students.

Rice said the goal of the event is to help integrate Salisbury’s four colleges, and to build bridges between student populations.

“Just because they don’t go to the same college doesn’t mean they can’t be friends and develop those relationships,” she said.

Downtown Salisbury arranged for trollies to travel to all four schools, ferrying students to and from the event until its official ending at 9 p.m. Rice said she hoped that the free transportation would help students who didn’t have cars, and would draw a larger crowd.

But she added that the event had lots of support from all of the colleges.

Over the course of the evening, West Fisher Street morphed from a street fair to a field for corn hole to a dance floor as students came and went — snagging free goods from booths, chowing down at Go Burrito or watching the band play.

Shamar Walker is a freshman at Livingstone College and said he was thinking about staying in his dorm tonight — but some friends talked him out of it.

Walker said he was enjoying the night out so far, and was settling in well at Livingstone.

“It’s like a big family on campus,” he said.

Antoinette Joiner, a third year master’s of divinity student at Hood Seminary manned a booth for the school giving away free bracelets. She said she liked that the event was a chance for the four colleges to get to know each other.

“It brings camaraderie among the schools,” she said.

And as for what she thought of the event itself?