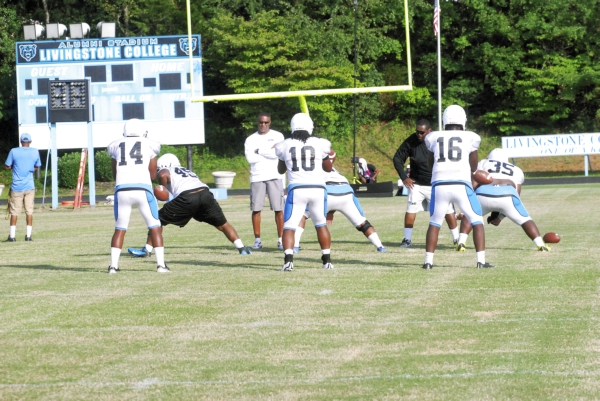 SALISBURY — Livingstone’s football team is a week and a day from opening the season in the Palmetto Classic against Benedict in Columbia, S.C.

Head coach Daryl Williams is glad to have another week to get ready.

“I’m real pleased with the way the guys came back in good shape,” said Williams on Thursday, just before an intrasquad scrimmage at Alumni Memorial Stadium. “I’m real impressed with where our defense is right now and our quarterbacks are looking better than expected, but I’m also glad we don’t play this week. This time of year, everybody needs more reps.”

Williams also wasn’t ready to name a starting quarterback to fill vacancy left by four-year starter Drew Powell. He said it was a two-man battle between red-shirt sophomore Dallas Bruton and Thaddeus Bell, who transferred in last January.

Another big hole to fill is the one left by longtime starting punter and kicker Leo Manzo, who graduated. Manzo is actually a volunteer coach now, helping freshman Tyler Keene learn the ropes. Keene is from Seattle, Wash.

“Tyler’s accepted his role and knows that he has some big shoes to fill,” said Williams. “But it’s like I told the quarterbacks and Tyler, you don’t have to be Drew Powell or Leo Manzo … just be yourself and if you are, we’ll be ok.”

Williams said that his coaching staff remains the same last season, Livingstone’s first winning campaign in 17 years. The Blue Bears were 5-4 officially, and 7-4 on the field, having defeated two NCAA non-counters.

Williams is his own offensive coordinator.

NOTES: Livingstone’s home opener is Sept. 10 against Edward Waters (Fla.) at 3 p.m. … Former Salisbury High School standout running back Justin Ruffin is on the Blue Bears’ roster. Ruffin’s senior season at Salisbury was 2012, when he scored 33 touchdowns. … There were two sets of twins on the team last year and this season, there are four sets. “Yes, I can’t just say ‘twin’ anymore,” said Williams, “or I may have eight guys responding.”