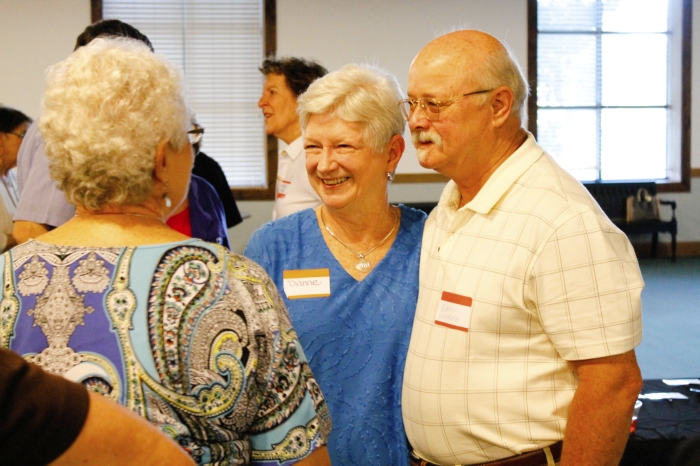 SALISBURY — Current and former Board members representing three decades of leadership at Rowan Helping Ministries gathered Tuesday to celebrate the 30th anniversary of the organization.

As she welcomed nearly 50 people who attended the reunion of former Board members, Executive Director Kyna Grubb described how their leadership has made a tremendous impact on lives in Rowan County.

“You have shouldered big decisions over the years, those involving facility constructions costing millions of dollars, those requiring mental fortitude for tacking tough issues, those needing a heart for service as you restored hope to those who had lost it, and those requiring faith that God would provide resources to help our most fragile citizens,” she said.

Dianne Scott, former executive director, was recognized at the event for 20 years of service.  Employees and former employees have donated funds to name the volunteer workroom in the original building in honor of Scott, who retired in 2010.

“Dianne spent her career – day in and day out – serving, planning, and thinking about individuals and families living on the fringe and struggling to have essential needs met,” said Grubb in announcing the naming of the room for Scott.

“She never let anyone forget that at the core of our mission is delivering our services through cooperative community action and that, without volunteers and our volunteer boards, we could not operate,” Grubb said.

The Board reunion held at the Wallace and Graham Warehouse kicked off a series of events that will celebrate the 30th anniversary of Rowan Helping Ministries. The organization was chartered by the state on Sept. 18, 1986.

Rowan Helping Ministries’ original building at 226 N. Long St. has been renovated and will be dedicated in September in honor of the late Ralph W. Ketner. Ketner donated part of the funding for the facility and led a campaign to raise additional funds. He was a loyal supporter over the years prior to his death earlier this year, Grubb said.

The public is invited to attend the dedication and open house for the Ralph W. Ketner Center on Sunday, Sept. 18, at 2 pm. The building houses crisis assistance services, including the food pantry and clothing center, and administrative offices.  Shelter services and Jeannie’s Kitchen are located in the new Robertson-Stanback Center at 217 N. Long St.