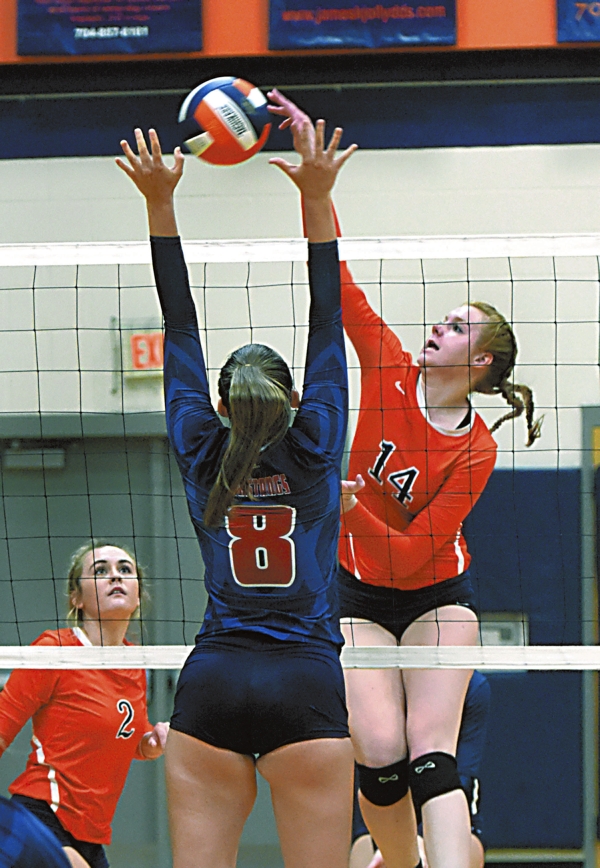 Wayne Hinshaw/for the Salisbury Post ... Lindsay Elmore (14) of Carson is on the attack at the net as the Mustangs’ Olivia Wright (8) defends and the Cougars’ Chloe Jacobs (2) looks on. Carson won the match in three straight games.

CHINA GROVE — Carson’s volleyball team led East Rowan comfortably, 23-14, in the third set of a match it had well under control, but Chloe Jacobs threw herself on the floor, nose-first, attempting to make a diving dig.
Jacobs wasn’t successful in saving that point, but what mattered is that she was willing to make that kind of effort in that situation.
“Well, if there’s even a one percent chance of getting to the ball, then I’m going to dive every time,” Jacobs said. “That’s what I do.”
Jacobs, a senior setter who has paid her dues on the jayvees and as a varsity reserve, is getting her chance to be a critical component of Carson’s volleyball team for the first time, and the 5-foot-5 lefty was good in the Cougars’ routine 25-9, 25-19 and 25-15 win against South Piedmont Conference opponent East Rowan on Thursday.
The awesome power from a 28-3 Carson team that was one of the strongest in 3A last fall is still in place — 5-10 senior middle hitter Elena Turnbull, 6-1 junior middle hitter Lindsay Elmore, sky-walking sophomore outside hitter Mallory Weast and dependable senior outside hitter Madison Barnhardt — so most eyes are on the new setter, who is replacing Rowan County Player of the Year Morgan Hester.
“I’m following a great player, so there are definitely big shoes to fill,” Jacobs said. “I’m going to work as hard as I can every day, and that’s all I can do. It’s just a big honor to play for Carson volleyball. I know we have the potential to be a very great team.”
Carson coach Kelan Rogers enters every season looking glum, worried that the Cougars might lose them all, but they’re always really good.
They’re off to a 5-0 start and they’re 2-0 in the SPC.
“We didn’t play one of our better matches today, just way too many unforced errors, but we’re a lot better now than we were two weeks ago,” said Rogers, who is 181-43 in eight seasons at Carson. “We lost seven of the girls who were on last year’s team, so there’s a whole lot of work to do. But the team chemistry is good and some of the pieces are still here. Chloe is doing well and we’ve still got good players.”
Besides losing Hester, the Cougars graduated Jordan Osborne, an all-county libero. The new libero is freshman Katie Blackwell.
With Blackwell, Elmore and Weast in the lineup, Carson now has three younger sisters of all-county players (Allison Blackwell, Hannah Elmore and Madison Weast) who helped propel Carson to 3A runner-up finishes in 2012 and 2013.
“We work well together,” Elmore said. “It really is kind of a family atmosphere here.”
For East Rowan, the key losses to graduation were all-county hitters Brittany Small and Avery Wright, and the Mustangs (1-4, 0-2) are off to a slow start.
“We lost some good hitters, but it’s my responsibility to adjust to our new players,” East’s senior setter Jordan McCall said. “We’ll get better.”
McCall, a college prospect, had back-to-back, acrobatic kills in the second set to pull the Mustangs within 22-17, but East lost momentum with a missed serve. That was really East’s only chance to make things interesting.
East trailed all the way in the final set after Turnbull and Elmore produced quick kills, and Barnhardt had a lead-stretching run at the service line. Then Barnhardt had back-to-back kills as Carson surged to to a 14-5 lead and didn’t look back.
The standout for East was libero Baleigh Hill, a tiny sophomore. She was diving all over the place, but Carson’s hitters were firing bullets from a lot of different directions.
“I thought we talked well and I thought we played hard, but Carson just has so many hitters,” Hill said. “We’ll keep working.”
Carson also will keep working, and the Cougars, who have ruled Rowan County since 2009, are going to be tough to beat again.
“We lost talented players,” Elmore said. “But the girls that were on our bench last year are doing a great job.”